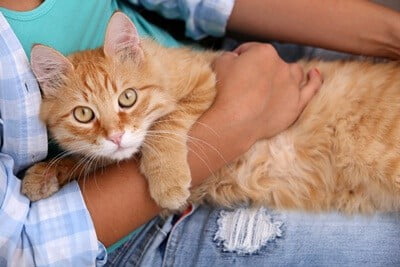 Cats have a long-held reputation of being aloof and detached in their behavior toward people. For this reason, many of us are surprised to discover that cats bond closely with their owners. Depending on this emotional connection, your cat may see you as a parental figure.

Kittens see their owners as parents because we provide food, warmth, and security. Even though we’re not their biological parents, kittens display a similar attachment style to human babies. This behavior continues into adulthood, with adult cats becoming happier around their caregivers.

Cats will imprint on whoever cares for them the most, providing for their social and physical needs. You’ll know the cat sees you as a parent if it kneads on you, follows you around, and meows for attention. Even curling its tail around your legs and blinking slowly are habits reserved for owners.

Do Cats See Owners As Parents?

While cats seem like solitary animals, they can form strong attachment bonds to their owners.

This connection resembles the way that babies attach to their parents. This means they can recognize their owners and experience affection toward them, although they express this differently.

Some indicators of owner attachment in cats include:

Kittens require a period of socialization to develop an attachment to their caregivers. However, once an attachment has been established, it remains stable over time.

Cats retain certain juvenile traits well into adulthood. So, the attachments they develop in their formative years remain present in adulthood.

According to Current Biology, 65.8% of adult cats demonstrated a similar attachment style to kittens.

Do Cats Think You’re Their Mother?

Your cat doesn’t think you’re its biological mother. Cats are intelligent enough to recognize the differences between species and tell that you’re not a cat.

However, it can still show a level of affection to its owner, similar to how it would treat its mother. So, just because your cat appears aloof, that doesn’t mean it doesn’t see you as a mother figure.

When cats are young, they follow their mothers everywhere because they rely on them for everything. Following their human caregivers around is a continuation of this behavior in adulthood.

In essence, your cat feels safe and secure around you, and it wants to be with you because it realizes that you’ll meet its needs just like a biological mother would.

Most social behaviors in cats began as mother-kitten behavior. The ancestors of cats were likely solitary animals, so any friendly behavior between cats would have been exclusive to mothers and their kittens.

As cats learned to recognize their mothers as caregivers, they carried this perception into their relationship with their owners, explaining why cats exhibit attachment-related behavior toward humans.

Signs Your Cat Think Your Its Mom

While cats don’t see their owners as their biological mothers, they can still bond with them.

Here are signs that your cat looks up to you as a mother figure:

Cats learn to respond to the loving behaviors of their owners. If their human caregiver provides them with food, attention, and nurturing, cats are more likely to respond with affection.

Cats have learned to take advantage of human emotions just as human babies do to get their needs met.

Normally, cats don’t meow with other cats. Instead, they make these childlike vocalizations and meows to provoke loving emotions and behaviors from us alone.

Kneads Around The Belly With Its Paws

During the kitten stage of life, they learn to knead around their mothers’ belly to improve the flow of milk from her teats.

While they don’t do this as adults, they’ll often knead around their owners’ stomachs (or soft blankets) to remind themselves of the comforts of a nurturing mother.

Do Cats Think Of Us As Family?

According to Frontiers in Veterinary Science, cats don’t differentiate humans from other cats regarding social behavior. Cats use the same body and facial signals when communicating with their owners.

For instance, cats will raise their tail when greeting their owners after a short absence. It’s also common for cats to rub themselves around their owner’s body to get their attention.

Do Cats Get Attached to Their Owners?

As stated, cats are capable of developing emotional attachments to their owners.

While their aloof demeanor may make it hard to read feline behavior, certain signs can enable us to recognize your cat’s attachment to you.

Signs of attachment include the following:

When a cat engages in headbutting, this indicates attachment and love toward its owner. Therefore, by rubbing its head against you, it identifies you as one of its friends.

Headbutting is also used by cats to mark territory. So, when your cat rubs its face against your body, it spreads its scent on you and marks you as a favored person.

Curling Its Tail Around Your Legs

A cat’s tail conveys crucial information about its current mood.

If the tail is erect and bushy with the hairs standing upright, it indicates that it feels frightened or threatened, while an erect, swishing tail signifies that your cat is happy or excited to be in your presence.

Similarly, when your cat wraps its tail around your leg, this communicates friendship and affection.

Cats show their bellies to creatures they feel safe around. Therefore, if your cat rolls over to reveal its underbelly, this signifies that you’ve earned its trust.

Purring signals that your cat loves you. In general, felines reserve their purrs to people they feel affection for. They don’t even purr with other cats, except for their young ones.

If your cat brings you a dead mouse or bird, then chances are, your cat feels at home with you. Also, it’s common for cats to bring you their toys and meow for the same reason.

A common display of affection is soft bites and nibbles. Cats will sometimes bite their owners gently as a sign of love. This is different from a real bite since it doesn’t hurt the recipient.

Following You Around Constantly

If your cat insists on following you to the bathroom or sharing a bed with you, it’s probably hopelessly attached to you.

Being followed around by your cat even when it’s not close to mealtime is an indication that it enjoys your company and wants to have more of your time.

Licking Your Face, Hair, and Ears

Some animals engage in certain grooming behaviors to show affection, and cats are no different. When a cat displays grooming behaviors, such as licking your face and ears, this signifies that it cares for you.

Sleeping On Top Of You

One of the clearest signs that your cat loves you is being happy to nap on your chest or lap.

Given their natural hunter instinct, cats don’t like to feel vulnerable, more so when they’re napping. Therefore, by sleeping on you, your cat communicates that it trusts you and feels safe in your presence.

Cats interpret eye contact with strangers, whether human or feline, as threatening. So, if your cat is happy to maintain eye contact with you, the chances are that it has accepted you as its favorite person.

Cats tend to prefer one human over others based on how well they communicate and meet their needs. Be attuned to your cat’s communication cues if you wish to develop a strong relationship with your cat.