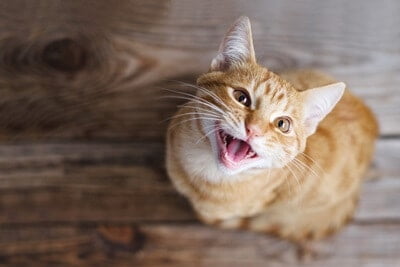 Meowing is a unique feline sound that was developed and engineered to communicate with humans. So, if you meow at your cat, it’s likely to meow back at you.

Cats meow at humans to greet you or ask for something, such as food or to be let outside. If a cat returns a human meow, it’s responding in kind. Cats imitate their owners, so they talk to us in the same way. Meowing is a means of communication, but cats don’t communicate with other cats this way.

Meowing isn’t a substitute for traditional human words and commands. So, the cat won’t fully comprehend the meaning of what you’re saying any more than you can precisely understand what the cat is saying to you. However, you can engage in short meow-based conversations with cats.

Table of Contents show
1 Why Do Cats Meow?
1.1 Should I Meow At My Cat?
1.2 Do Cats Understand Human Meows?
1.3 Replacing Words And Commands with Meows
1.4 My Cat Meows When I Talk
1.5 My Cat Doesn’t Meow Back at Me

Why Do Cats Meow?

Meowing is a unique communicative style developed by cats to get what they want from humans.

As per The Journal of Comparative Psychology, the meow of a wild cat is incomparable to a house cat. Understanding why cats meow enables us to understand why cats meow back at you.

When a cat meows at its owner, it wants attention from you. This doesn’t necessarily mean that your cat is distressed, although that’s possible. Your cat wants something from you.

This table summarizes the meaning behind common meow sounds:

Cats have around 17 different meow sounds, which are variations on this core sextet of translations.

Should I Meow At My Cat?

If you want to hear your cat’s meow, you can do so. Your cat will likely meow back at you because it feels listened to and appreciates your communication attempts.

Also, cats are born imitators, so they’ll return a meow because it’s replicating a sound that you’ve made. The feline meow is believed to have originated as a response to a human infant’s cry, and cats learned that this sound got them immediate attention.

Your cat’s meowing at you because it wants to be fed, groomed, petted, or played with. If these needs remain unmet, your cat will grow impatient, and its verbal communication will change or cease entirely.

Your cat will understand that you’re communicating with it, but cats don’t communicate with each other through a series of meows. As a result, your cat is unlikely to enter into a prolonged dialog.

You can tell whether a cat understands your meowing by observing its reaction:

The ideal scenario is a cat returning your meow in a pitch-perfect imitation. Try this with a short meow to say, “hello.” If your cat reciprocates, look at its tail; if it points upward or curves into a question mark, it’s returning your greeting.

Replacing Words And Commands with Meows

As stated, cats don’t communicate with each other this way. Your cat holds you in the same esteem as a fellow feline. Your cat will be baffled by this communication style and will eventually completely ignore it.

The exception to cats not meowing at each other is mothers and kittens. Inter-cat generations communicate using meows and similar sounds, and this memory may be retained into adulthood. Used sparingly, a meow can be a useful communication tool.

If your female cat has birthed kittens, listen closely to how she communicates with her litter. You may notice certain verbalizations that can be adopted and imitated.

You’re unlikely to be able to imitate a mother cat’s meow perfectly, but it’ll understand the intent. The remainder of the comprehension is based on facial expression, tone, and body language.

This means that you can use meows on occasion. For example, a cat approaching a hot stove may change direction with a loud meow. Equally, a low growl is preferable to losing your temper.

Meowing at a cat should just be considered a source of fun and amusement.

My Cat Meows When I Talk

You don’t need to meow at a cat to gain a verbal response. Often, a traditional conversation will suffice. If you want to gain your cat’s attention, speak clearly.

As Animal Cognition explains, cats recognize voices as belonging to their owners. This will be enough to pique a cat’s curiosity, and it may come to find you upon hearing you speak. Unfortunately, the cat cannot complete a conversation as most only understand 30 human words.

You may use these words amidst your conversation to garner a meowing response. Ask your partner what they’d like for dinner, and your cat will hear, “dinner.” The cat will start meowing to request feeding.

It may not even be a direct word, but it sounds like a command. Asking, “has the cat been fed?” may filter through the feline brain as, “cat, bed.” The cat may meow indignantly.

My Cat Doesn’t Meow Back at Me

Not all cats will return meows from humans, especially senior cats who’ve outgrown playful behaviors. A quiet, older feline is usually a good sign as it implies that the cat is secure in the relationship.

If you have adopted a long-term stray, it may fail to meow back as it’s forgotten how to interact with humans. You can encourage them to meow back by leaving gaps between the sounds, just as you would during a human conversation.

Some cats are quiet by nature due to their breed. Some breeds, especially Siamese cats, are highly chatty. Others prefer to be quieter, speaking when spoken to, and sometimes not even then.

If your cat is not one for meowing back, you should use words and commands. These are clearly what the feline is hardwired to respond to. Only grow concerned if a vocal cat suddenly stops meowing.

If the cat meows unprompted but doesn’t respond to you, it no longer sees the benefit of doing so. A cat that stops meowing altogether may have a sore throat or damaged larynx, though.

Cats returning human meows is common, and some basic interaction in a feline’s native language may improve your bond. Avoid spending hours meowing back and forth as the cat will grow bored.