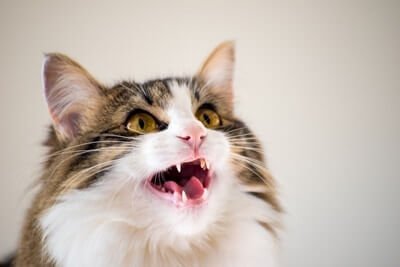 Your cat has stopped meowing all of a sudden. This isn’t normal feline behavior because cats verbalize to let humans know that they want food or attention or express annoyance with a situation.

If your cat no longer meows, check if it has a foreign object trapped in its throat. If not the case, your cat likely has laryngitis. Some cats develop laryngitis due to meowing too much or ingesting an irritant. A lack of vocalization can also be a secondary symptom of another medical condition, such as anaphylactic shock, laryngeal paralysis, feline herpes, feline calicivirus, hyperthyroidism, trauma, hairballs, throat tumors, and rabies.

If your cat stops meowing due to a sore throat, it may reject food and water. This can quickly become dangerous. If your cat has stopped meowing suddenly, you must find out why this is the case.

Why Has My Cat Stopped Meowing?

If a previously verbose cat no longer meows, it’s usually linked to a medical concern. Common complaints that prevent a cat from meowing or change a cat’s meow include:

Laryngitis is an inflammation of the larynx. If the larynx is inflamed and swollen, the cat will struggle to verbalize. The cat will have a harsh, dry cough released in short bursts. Over several days, the cough will become moist. Other symptoms of feline laryngitis include:

Sometimes, laryngitis is caused by excessive meowing. Verbal breeds of cats such as the Siamese may struggle with laryngitis. In these cases, the cat will recover after a few days of rest.

Cats can also develop laryngitis due to foreign objects trapped in the throat. Inhalation of an irritant, such as cigarette smoke, dust, or air freshener, can also lead to laryngitis. These symptoms will pass after several days.

Laryngitis can be diagnosed using an endoscope. This is called a laryngoscopy. If a foreign object is found in the throat, it will be removed. If not, further scans will be required to determine the reason for laryngitis.

Oftentimes, laryngitis is not a standalone concern. It will be a symptom of other health problems. As the Journal of Veterinary Emergency and Critical Care explains, treatment depends on the underlying cause. However, basic laryngitis is treated with antibiotics, anti-inflammatories, and painkillers.

Laryngeal paralysis sees the cartilage of the larynx freeze, unable to open or close. The Journal of Feline Medicine and Surgery found it the most common complaint in cats with a laryngeal disease.

The symptoms of laryngeal paralysis are similar to conventional laryngitis. Your cat may show other disturbing symptoms, such as collapsing after physical exertion and regurgitating undigested food.

As with laryngitis, a laryngoscopy will be required to diagnose the problem. If laryngeal paralysis is confirmed, treatment is urgent. If the problem is still mild, oral steroids and tranquilizers can resolve it.

In more serious cases of laryngeal paralysis, surgery will be required. This involves making a laceration to re-open the cartilage on the larynx. According to The Canadian Veterinary Journal, extreme cases require a ventriculocordectomy. This is the removal of the vocal cords. The cat will be unable to verbalize after this but will be fine in other ways.

Aside from a swollen throat, symptoms of anaphylactic shock include:

Anaphylaxis is treated with epinephrine, a form of intravenous adrenaline. Anti-inflammatories and fluid replacement may also be needed. The shock can also be calmed using antihistamines. You can give your cat Benadryl; one milligram of Benadryl for every pound of bodyweight is cat-safe. This is just a means of providing temporary relief.

Also known as FHV or FHV-1, feline herpes is a contagious bacterial respiratory infection. FHV is usually transferred through direct contact with an infected cat. Saliva, blood, and sharing food and water are common causes of this condition. The symptoms of feline herpes include:

It is pharyngitis that causes a cat to lose its voice as it inflames the back of the throat. This leaves the cat with a sore throat, making it painful to swallow or verbalize.

Once a cat develops FHV, the virus never leaves its body. It lies dormant and can be reactivated during times of stress or secondary illness. This can become problematic in older cats with limited immunity.

All cats should be vaccinated against FHV as kittens and given boosters every 3 years. Treatment for feline herpes involves antibiotic medication and rest. If the cat is dehydrated, intravenous fluids will also be required.

Feline Calicivirus (FCV) is an upper respiratory problem. It can infect cats along with FHV. The symptoms are identical to FHV, although FCV can also lead to gingivitis and muscular problems.

A cat can be vaccinated against FCV, but this is not always successful. FCV mutates, which means that a different strain could impact a cat. However, a vaccine will minimize the symptoms.

Antibiotics and rest will clear up an FCV infection in an otherwise healthy cat. Ensure that your cat drinks plenty of fluids to stave off dehydration and flush the virus from the body.

Hyperthyroidism is comparatively common in senior cats. This condition is also known as thyrotoxicosis.

Hyperthyroidism sees the thyroid glands on a cat’s neck become swollen and enlarged. This makes swallowing, breathing and verbalizing difficult.

These enlarged glands also flood a cat’s body with excess hormones. This leads to physical symptoms, including:

The cause of hyperthyroidism is usually a benign tumor on the throat. This is known as an adenoma.

Sometimes, hyperthyroidism can be traced to a malignant tumor. These are known as thyroid adenocarcinomas. In this case, the cat will undertake radiotherapy or have its thyroid glands surgically removed.

Tumors on the Throat

In addition to tumors connected with hyperthyroidism, cats can develop throat cancer. This is due to a tumor known as a chondrosarcoma. Senior male cats are most at risk of this condition.

Chondrosarcoma starts in the throat and larynx, but quickly spreads. This makes diagnosis and treatment a priority. Common symptoms of chondrosarcoma include:

Sadly, the prognosis of a cat with chondrosarcoma is poor. This tumor is so malignant that it will typically spread before treatment. Even a cat that undergoes emergency surgery is unlikely to survive longer than six months.

If a wild animal bites a cat, the virus can be passed on. The Journal of the American Veterinary Medical Association references raccoons as common rabies carriers.

Rabies is a core vaccine for cats. Most states require a domesticated cat to be vaccinated by law. Check if this applies to your territory. The punishment for not vaccinating a cat against rabies can be severe, as can the consequences.

Rabies makes a cat’s throat swell, making swallowing and vocalization difficult. A rabid cat will rarely close its mouth for this reason. The virus has the following additional symptoms:

A rabid cat’s life will be ended on sight. Rabies is highly contagious and invariably lethal to humans and animals alike. There is no cure, which is why vaccination is so important.

Physical trauma to the throat can damage a cat’s vocal cords. If your cat fell from a height, for example, it may have jarred or damaged its larynx. Damage to the trachea can also cost a cat the ability to speak.

If a cat shows no symptoms of ill health, throat trauma is the most likely explanation. Treatment ranges from oral painkillers to emergency surgery.

The cat may also experience emotional trauma and refuse to vocalize. If the cat had laryngitis, it might remember meowing as being painful. This may discourage the cat from verbalizing in the future.

Hairballs are a common cause of vocal chord blockages. These blockages can prevent your cat from meowing. While hairballs are part and parcel of cat ownership, they can become problematic.

Cats develop hairballs while grooming. The cat licks its fur and ingests any fur that it sheds in the process. If too much fur is swallowed at once, this can become trapped in the throat.

Rub a little Vaseline on your cat’s paws before it grooms. This is not toxic to cats. When swallowed, it will act as a lubricant. This will ease the hairball down your cat’s throat and into its digestive tract.