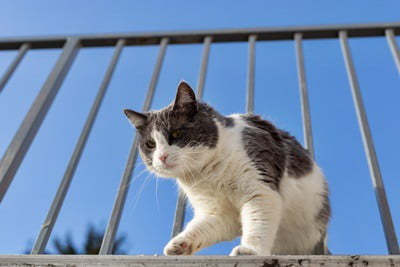 Cats position themselves in elevated areas to survey their terrain, enjoying the privacy and security afforded by height. Unfortunately, this puts them at risk of getting hurt should they fall.

Higher falls give cats time to prepare for landing, so there are reports of cats surviving 32-story falls from high-rise apartments. This is due to low terminal velocity, giving cats longer to use their righting reflex. Cats can usually fall 8 feet or less without hurting or injuring themselves.

Just because a cat can fall from a height doesn’t mean it’s safe to do so. Older cats, in particular, will struggle to recover from impact injuries from bad falls.

Table of Contents show
1 Do Cats Hurt Themselves When They Fall?
1.1 Do Cats Always Land on Their Feet?
1.1.1 Falling Off Tables, Closets, And Home Appliances
1.1.2 Falls from A Second-Floor Balcony
1.1.3 Falls from High-Rise Apartments
1.1.3.1 Feline Terminal Velocity
1.1.4 Falls from Trees

Do Cats Hurt Themselves When They Fall?

Cats often astonish owners by making death-defying falls and getting up as though nothing had ever happened. There is always the risk that the cat has injured itself and is hiding its pain.

Numerous factors will influence whether a cat will hurt itself when falling:

The reason cats seem unperturbed by a fall is the strength in their legs. A cat’s legs may look sinewy, but they’re surprisingly muscular.

Paw pads are like natural shock absorbers so, if a cat lands on its feet after a fall, the impact will be spread evenly over the entire body.

Do Cats Always Land on Their Feet?

Cats have a reputation for always landing on their feet when falling. This adds to the mystery of feline falls, making it seem that cats never hurt themselves.

All cats have a righting reflex, and most perfect this as kittens. When falling, the vestibular apparatus in a cat’s ear instinctively enables the cat to balance itself.

Nature published the first study into the righting reflex of cats in 1894. Experimental Physiology followed this up with a diagram explaining how cats retain such amazing balance.

The process is as follows:

The cat will do this as many times as necessary to ensure that it lands on its feet. This may not be enough to prevent injury as much depends on how far the cat fell and its physical condition at the time of the fall.

Cats fall from a height in the home near-constantly, whether by accident or design. However, the height of a closet, kitchen cupboard, or refrigerator is rarely enough to hurt a cat.

Healthy cats can leap around 8 feet. By coincidence, the ceiling height of the average American home is also 8 feet, which means that a cat can comfortably jump from the floor to the ceiling or vice versa.

According to The Journal of Experimental Biology, cats use multiple hind leg muscles to jump. Unfortunately, many senior cats have weakened hind legs due to degraded cartilage, making jumps and falls uncomfortable for arthritic cats.

The more a cat uses these leg muscles, the more strain is placed on them. This will aggravate arthritis pain in senior cats, making falls from seemingly innocuous heights more problematic.

If your older cat remains mobile, take preventive measures against falls. Apply soft landing spaces, such as cushions, around the home to give your cat something to aim for when jumping or falling.

Falls from A Second-Floor Balcony

A second-story building is an awkward height for a cat to fall, which is roughly twice as high as a cat can comfortably jump. This means that the results vary as to whether the cat will be injured on landing.

A healthy cat of average weight will usually be fine. The cat will spread its body to share the impact of the landing; it’ll be shaken by the experience but will likely recover.

Older or heavier cats are more likely to experience injuries because their greater impact and weaker bone structure result in breaks and fractures. According to The Journal of Small Animal Practice, breaks to the femur, pelvis, and mandible are most common in falls.

Also, the outcome will be dependent on the cat landing on its feet. If the fall was sudden, the cat might not have time to adopt a righting reflex. In such cases, injury is almost inevitable.

When a cat falls from a great height, it enters the realm of high-rise syndrome.

This refers to cats falling from tall heights and the injuries they endure. It may surprise you to learn that cats are likelier to survive falls from substantial heights.

The Journal of the American Medical Association surveyed 132 cats following falls from height. The average fall was around 5.5 stories, but some fell from a building as high as 32 stories.

Of the 132 cats studied, 90% experienced thoracic injuries (blunt force trauma), which will always be dangerous. Only 37% of cats required emergency treatment, 30% required non-emergency help, and the rest required no treatment at all. Of the cats seen by a vet, 90% survived post-surgery.

Cats that died on impact wouldn’t have been part of the study. However, findings suggest that cats may fare better when falling from tall heights due to terminal velocity.

Terminal velocity is the top speed a falling object drops from a height.

If a cat falls from a sufficient height, it’ll reach terminal velocity, enhancing the cat’s chances of survival and reducing the risk of injury.

Imagine you’re standing on top of a 10-story building, which is around 100 feet high. If you were to fall from this building, you would reach a terminal velocity of around 120 mph and hit the ground in seconds.

Cats have a terminal velocity closer to 60 mph, so cats fall at around half the speed of humans, giving them more time to right themselves and land on their feet.

Once the cat reaches terminal velocity, it relaxes its body and spreads its limbs. This has a similar effect to a parachute, slowing the fall further. From here, the cat will instinctively use its righting reflex.

The shock alone of falling from this height is still dangerous. Even if the cat lands on its feet, serious injuries are a risk. Lower terminal velocity means that cats are more likely to survive falls, but it doesn’t make them invulnerable.

Falls from trees, even tall trees, are more problematic.

The cat may fall due to being startled by a sudden noise and, if stressed, the cat’s instincts will be blunted. In addition, trees provide fewer steady horizontal platforms for cats to negotiate, making falls more likely.

A cat may chase prey up a tree. Clambering up the tree is easy as the cat uses its claws and momentum to reach heights. However, when the cat realizes where it is, it may stay put and await rescue.

If the cat dozes off in a tree, it can lose balance. If it does not wake up before landing, it won’t use its righting reflex. Even if it does awaken, it may be groggy, increasing the risk of landing on its back or head.

The Journal of Feline Medicine and Surgery stated that falls from 7-story buildings are most likely to cause injury to cats. This height is too tall to jump down from safely but not high enough to achieve terminal velocity, so any falls are sudden and high impact.

There is no hard-and-fast rule about how far a cat can fall without getting hurt, as much depends on the age and physical condition of the cat. Any height that exceeds 8 feet is dangerous, but falling from greater heights gives a cat more time to adjust to the situation.

1 thought on “How Far Can Cats Fall Without Getting Hurt or Injured?”