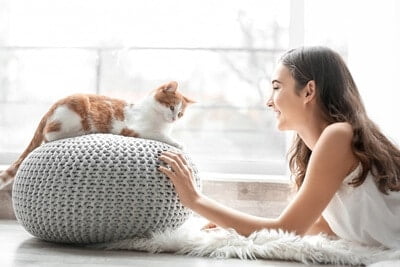 Unlike other domesticated animals, cats don’t recognize humans as superiors and masters. In fact, they don’t even recognize owners by sight, which has led to an undeserved reputation as an aloof species.

Cats don’t recognize their owners by looking at them because their resting faces look the same. Instead, cats tell the difference between humans based on sound and smell. Cats learn to recognize their owner’s voice, and human skin carries a unique scent to a cat, regardless of whether they’re wearing cologne.

The idea that cats don’t recognize or care for their owners is a fallacy as they can have deep emotional connections with human companions. Their recognition and understanding just differ from our own.

Does My Cat Recognize Me?

Cats can tell humans apart, which won’t come as a surprise to any cat owner. Most felines have a favorite person, preferring the company of one individual over others. The cat doesn’t identify this person by sight, though.

A study profiled by the Journal of Vision tested 12 cats on their recognition of human owners. Just 54% of cats recognized their owners by sight alone as human faces don’t register with cats. In effect, we look the same.

Part of this is how cats see humans., as it’s believed that cats see humans as fellow felines. Cats are slightly perturbed by our size and wonder why we’re so clumsy. As owners are non-aggressive, cats accept human companionship.

Some will dispute this theory, claiming that cats remember their fellow felines. The same study found that cats recognized other felines on sight 85% of the time, perhaps because cats are innately more wary of other felines.

If you watch your cat interact with another cat, it makes sense as cats can become wary of other cats upon sight. They seem to be recalling a negative experience or questioning why this infiltrator is entering their claimed territory.

This is likely because cats have long memories of bad experiences. First impressions matter to cats and can result in a long-held grudge. If two neighborhood cats fight on a first meeting, they’ll remember it, which is simple, instinctive self-preservation.

In addition, we must remember the effectiveness of a cat’s senses of hearing and smell. These senses, more than sight, are how a cat tells two people apart, and it’s these senses that enable a cat to bond with its owner.

Why Do Cats Not Recognize Faces?

Cats need more than just their vision to distinguish between humans.

Imagine that you had been asked to describe somebody’s face. Think about the characteristics you would use. The most obvious examples would be skin tone, eye color, hair color, and distinguishing features.

Cats have three cones in their retina. According to Vision Research, these are less effective at deciphering color than those of a human, so telling humans apart by pigmentation is impossible for a cat.

Cats are naturally long-sighted. This is the evolution of hunting and survival as wild cats survey their terrain from afar, deciding whether it’ll be safe and beneficial to enter. Up close, a cat’s vision is blurry.

This makes a prominent nose, distinctive chin, scars, or tattoos difficult for a cat to make out. Even facial hair doesn’t register in a cat’s vision, as the cat would need to rub itself against your face to determine the texture.

Think about the size discrepancy between cats and humans. We remember other people’s faces, as we are around the same eye level. Cats spend more time at our feet and will rarely be close to your face long enough to memorize it.

This makes the human face an indistinguishable mass of features to a cat. All they see is a tall shadowy shape with two arms and legs, which is why a cat’s other senses make up for this vision shortfall.

According to Animal Cognition, cats recognize owners by their voice.

A test played cats three vocal tracks: one belonged to an owner with stranger’s voices making up the rest. 75% of the cats responded to their owner’s voice, ignoring the others.

There are limits as cats won’t always pick up its owner’s voice in a crowd. The volume will also play a part so, if you usually speak to your cat in a gentle sing-song tone, yelling may go unrecognized.

As Development Psychobiology explains, kittens respond to their mother’s voice. A queen uses a unique meow or chirp to gain the attention of her young as this warns them of danger or announces an imminent feeding session.

When a cat grows up and leaves its mother, its owner takes over the role. The cat expects you to keep them safe from harm, providing food and shelter, so it’ll respond to your voice in the same way as it did its mother.

My Cat is Not Responding to Me

If your cat recognizes your voice, why does it ignore you when you call it?

The journal Nature confirms that cats recognize their names. So, your cat is responding to you, but you don’t notice as recognition is subtle.

A cat won’t necessarily come bounding into a room like a dog. Instead, it’ll tilt its head slightly and twitch its ears, which denotes that it has acknowledged your voice and is getting on with its business.

Don’t take this personally as your cat’s not ignoring you. The lack of obvious reaction means that the cat recognizes your voice and feels safe. If not, the sound would be more startling.

The cat will find you and discover what you want when ready. As explained by Current Biology, this should be deemed a compliment as the behavior suggests a secure attachment. Your cat trusts you and wouldn’t react if it didn’t.

An immediate reaction could suggest a more insecure bond between owner and feline. The cat is rushing over to see you because it fears that you may not call again. This explains why some cats respond to others above their owners.

A cat will respond with excitement to certain voices, such as a family friend. It doesn’t see this person daily, so it experiences an insecure attachment. A good cat owner isn’t far away for too long, so the bond is more secure.

Recognition of Other Sounds

It’s not only an owner’s voice that a cat will recognize. Cats will also learn and memorize other sounds that you make, including footsteps and breathing.

When you return home from work, you may find your cat waiting at the door because it has memorized your gait and learned to recognize the sound of your footsteps. Due to its hearing, the cat heard you approaching from afar.

Cats recognize the patterns of human breathing. Do you wake up in the morning to find your cat staring at you? The cat hasn’t retained this position all night; it’s detected changes in your breathing.

Cats understand how you sound when you’re in a deep sleep rather than almost awake, perhaps because you’ve stopped snoring. Cats quickly learn that they get no attention during snoring. Lighter and shallower breaths are easily distinguishable, so your cat will listen for these, knowing that breakfast will soon follow.

Cats have up to 80 million scent receptors in their nose – 20 times more than humans. According to Applied Animal Behavior Science, scent is pivotal to a cat’s daily life and understanding.

Every human also has a distinguishable scent to cats. Humans recognize each other’s scents via artificial means, such as perfume or shampoo. A cat’s nose cuts through this artifice, picking up on the aroma of our skin.

If you change the scent you wear, it’ll pique the cat’s curiosity. Your cat may stare at you with its mouth open, tongue lolling, and upper lip curled. This is called the flehmen response.

The vomeronasal organ (Jacobson’s organ) is found in the roof of a cat’s mouth. Cats use the flehmen response when encountering a new smell as they are taking in the scent in full, committing it to memory.

Cats remember good and bad things that are important to them, so they’ll be keen to memorize a new smell associated with their owner.

Marking Humans to Claim Them

Your cat will check your scent for any markings before you speak. As mentioned, cats won’t recognize an owner by sight. Until you speak, you could be anybody as far as a cat is concerned. The scent provides immediate recognition, which is how cats can identify their siblings.

Your cat will leave its mark on you constantly. Every time your cat rubs its head or paws on you, it leaves a scent behind, marking you as a source of pleasure. Think of it as the cat equivalent of a note to self. You are the provider of food or play, and your smell confirms it.

When your cat first acknowledges you, it’ll check for these scents. As soon as it detects them, it’ll approach you as it’s confirmed that you’re not a threat. Instead, it will draw comfort from your scent.

Also, your cat is checking for other smells. As innately curious animals, cats want to know what you have been doing without them. Your skin and clothing will carry scents associated with where you’ve been.

If you talk to your cat, it confirms your identity beyond doubt, so the cat may start to rub itself against you. If so, it’s reapplying its scent, covering up these new aromas.

Your cat knows that other felines use scent to recognize you, so rubbing is your cat’s way of claiming you, so it’s sending a warning to other cats that you have been claimed.

Cats can recognize their owners and other humans, but not based on their appearance. Voice and scent are the key factors in feline recognition. So, speak to your cat regularly and encourage scent gland marking.