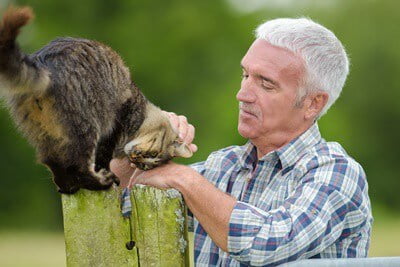 Cats recognize their names and will respond to them with alacrity or in subtle ways. Oftentimes, a cat will prick up its ears when you call its name because it learns that something fun or enjoyable will soon happen.

Cats find it easier to learn their name when it’s kept short and contains hard vowels and consonants. This makes it easier for cats’ brains to differentiate from indecipherable human conversation. Using your cat’s name during pleasurable activities, such as dinner, play, and petting, is most likely to elicit a response.

The average domesticated house cat understands about 30 human words. The cat’s name will be among these words, alongside other essential commands. Do not overuse your cat’s name, and never shout its name when you’re feeling angry. Eventually, your cat will start to respond positively to the use of its name.

Table of Contents show
1 Does My Cat Know Its Name?
2 How Do Cats Recognize Their Names?
2.1 How To Name A Cat
3 How To Teach A Cat Its Name
3.1 How Long Does It Take for A Cat to Learn Its Name?
4 Can You Change A Cat’s Name?
5 Why Doesn’t My Cat Respond to its Name?
5.1 Use of Similar-Sounding Words
5.2 Declining Hearing
5.3 Dominant Feline Behavior
5.4 Stressful Name Association

Does My Cat Know Its Name?

You may assume that your cat does not know its own name. After all, it’s a common complaint that cats do not respond to calling. However, Scientific Reports has found that cats differentiate their names from other words.

The study played recordings of an owner’s voice that was engaged in general conversation. Animal Cognition explains that cats tell people apart by voice. The cats engaged in this study soon tuned out after initial recognition as they were used to hearing their owners’ voices.

A sudden change occurred with the owner used the cat’s name in the recording. At this point, the cat’s ears pricked up, and it started to show more attention. This suggests that, amidst indecipherable conversational sounds, cats understand the use of their own name.

How Do Cats Recognize Their Names?

Cats recognize their names through familiarity, so an owner’s voice will be automatically detected. The cat will hear its own name a lot, especially while interfacing directly with its owner.

Perhaps more importantly, cats associate the sound of their name with pleasure. The use of a cat’s name may precede a treat, meal, or petting. This quickly teaches the cat that its name is worth responding to.

Use your cat’s name sparingly. You want your cat to realize that names are very important. If you keep using its name, the sound will blend into the background along with other human words.

Consider an alternative term or nickname when you’re not addressing your cat directly. This will avoid attracting unwanted attention. Just avoid using nicknames when talking to your cat. Cats have a limited understanding of human words, so it’s important to keep things simple.

How To Name A Cat

Note that cats recognize the sound of their name rather than the word itself. The feline brain recognizes and breaks down particular syllables, and some of these are easier for a cat to differentiate between than others.

The Journal of the Acoustical Society of America found that cats can differentiate between vowels. Hard vowel sound (A, E, and I) are easier for a cat to understand. O and U are referred to as soft vowels and can become buried in other sounds.

The same applies to consonants. Cats find it easier to recognize hard consonants and will respond accordingly. Examples of hard constants are B, D, K, and T. This is why a call of “here, kitty kitty” can gain feline attention.

Your cat’s name should not sound similar to other words or commands. For example, if you have a child named Andy, do not call your cat Sandy. Avoid names that sound like “dinner,” “down,” and “sit,” too.

How To Teach A Cat Its Name

Once you have selected a name for your cat, you can start teaching it to them. The best way to achieve this by providing tangible rewards when your cat responds to its name.

If your cat is food-focused, offer tasty treats, such as Dreamies. If you use food for training purposes, deduct this from your cat’s daily calorie allowance. Cats will learn that responding to their name leads to rewards. Once your cat learns its name, you can reduce the rewards and remove the risk of weight gain.

Always use a gentle and convincing voice when calling your cat’s name. Cats will pick up on the tone of your voice. Also, the name must have positive connotations. Cats will only approach humans if they consider it safe to do so.

How Long Does It Take for A Cat to Learn Its Name?

The length of time it takes depends on the individual cat. Find out what stimulates your cat and captures its imagination as they only learn and retain information that they consider essential.

Some cats learn their names within days, but it could take up to 6 months. Kittens are more open to absorbing new information than senior cats. The key learning window for a kitten is the first 12 weeks of its life. However, most kittens take their cues from their mother at this age. Human language may be ignored.

If your cat does not respond to its name after 6 months, consider changing it. Your cat may have an issue with its name or simply dislike the sound.

Can You Change A Cat’s Name?

There are many reasons why you may wish to change a cat’s name. Perhaps you adopted a cat with a name similar to an existing pet or family member or just found that the initial name did not garner a response.

Your cat may also have outgrown its name. The fur of black cats changes with age, for example. “Shadow” may no longer be the ideal name for a cat with rusty, red fur. A ‘cute’ name for a kitten may be inappropriate for a senior cat.

Theoretically, you can change a cat’s name at any point in its life. If you want your cat to respond, don’t change its name too often. Constant changes to the name will grow confusing.

Do not change your cat’s name just because it does not come running when you use it. A lack of understanding does not cause the behavior. The cat just does not wish to approach you at this time.

Why Doesn’t My Cat Respond to its Name?

There is every chance that your cat is responding to its name but is doing so subtly. A cat will not always come running over at the sound of its name unless it’s feeling really hungry or it’s started to rain outside.

If your cat’s ears twitch or prick up, it is responding to its name. The cat may then continue with what it was doing. It knows that you want its attention, but you haven’t made it worth the cat’s while to respond. It will come to find you when it is feeling ready to do so.

Usually, this denotes a secure attachment between feline and owner. If your cat never responds to its name or behaves strangely, it may be for one of these reasons:

Use of Similar-Sounding Words

Your cat may have mistaken its name for another command. For example, if your cat is named “Ted,” it may think you are saying, “bed.” The cat may then approach its bed or a preferred napping spot.

If the cat’s name sounds similar to that of another pet or family member, it may think you’re addressing somebody else. In these instances, it is advisable to change your cat’s name to something unique and retrain it.

If a senior cat suddenly stops responding to its name, it may be losing its hearing. Feline senses deteriorate with age, so you have to make a series of lifestyle adjustments to accommodate your cat.

Test your cat’s hearing by stamping your feet or gently clapping your hands behind the cat. If your cat responds to other sounds, hearing loss is unlikely to be the explanation.

Your cat may be displaying dominance. It heard you calling but doesn’t want to show subservience. You’ll need to ensure that your cat learns its place in the pecking order before this translates into bad behavior, such as aggression.

If your cat seems panicked by the sound of its name, you should change its moniker to something that makes it feel more at ease. The regular use of a word that triggers anxiety can be extremely stressful for cats.

Sometimes, adopted cats have been mistreated in the past, leading to negative name associations. Perhaps you shouted at the cat while using its name, and it has remembered this event. Cats have good long-term memories, especially over matters that have negative connotations.

The key to a cat recognizing its name is using it regularly in a positive context. A cat will quickly come running over if it associates its name with getting its favorite food, especially when it’s hungry.