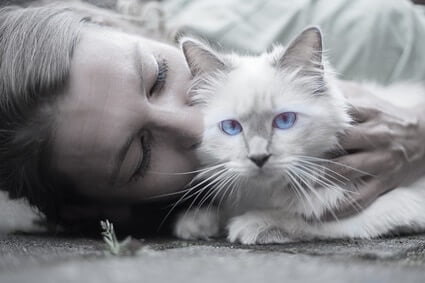 Owners regularly hold conversations with their cats. Not only is this therapeutic, but it’s a great bonding tool that enables you to feel closer. But while conversing in your best baby voice seems like the logical thing to do, can cats understand what people are saying?

Cats can understand 25-35 basic human words, such as food, eat, sit, no, stay, and stand. Positive reinforcement training is necessary for a cat to learn what each of these words means. High-pitched sounds encourage cats to come to you, but cats can’t understand human meows.

What Words Can Cats Understand?

As stated, research shows that cats can understand between 25-35 words. This includes their name and any words that may benefit them. Some examples of these words are food, eat, and no.

Cats may understand words like sit, stay, or stand. However, this isn’t possible without training to associate these words with actions because cats can’t assess their meaning.

The delivery of the words is usually more important than the word itself. For example, cats can feel threatened by a word that’s delivered in a loud or aggressive tone.

While the number of words that cats can understand is far fewer than dogs (who can recognize more than 100 words), cats can vocalize more sounds to communicate with humans.

Kittens have around 9 different vocalization types, while adults have 16 types. This implies that their relationship with humans influences how cats talk.

Cats’ mouths and vocal cords cannot produce the same sounds that humans make, so cats can’t speak English or any other language.

When you’re alone with your cat, how many times have you meowed at your cat to invoke a reaction? It’s the perfect way to build a connection, even if it doesn’t give you much back in return.

To learn if cats can understand human meows, you need to understand why cats meow. Cats only meow if they want something, such as food, water, a litter change, attention, affection, or protection from danger.

Scientists believe that this shrill cry has evolved to communicate with humans over time. Cats don’t meow at each other but communicate through scent, body language, facial expressions, and touch.

They’ve learned that they can’t communicate with us in the same way as other cats, so they only meow to get their owners’ attention and alert them that they need something.

However, if you’ve tried meowing at your cat to get a reaction, cats can’t respond to human meows because they’re not evolved enough to reply. If you find your cat meows back to you while you’re attempting to communicate with them, it’s just asking you for something.

So, cats can’t understand or respond to human meows. However, there are many ways to tell what your cat is thinking through its own language.

Here are some ways that you can interpret how your cat is feeling:

Do Cats Understand Their Names?

A study in Scientific Reports details how a team of researchers, led by Saito, a cognitive biologist at the University of Tokyo, used a habituation-dishabituation method to investigate whether domestic cats could discriminate between human utterances.

According to the Smithsonian Magazine, Saito discovered that cats recognized their owners’ voices and wanted to explore whether they could distinguish their own names.

Using 78 domesticated cats from ordinary households and a cat café, the researchers discovered that the cats they studied could discriminate between their own names from general nouns, even when the words spoken were by people unfamiliar to them.

While the team found that 9 of the 11 cats responded to voice stimuli by moving their ears and heads, the study doesn’t prove your cat understands the concept of a name.

Instead, a cat may have become more familiar with its name than other words used in the test, displaying a stronger response as a result.

When calling your own cat’s name, using a consistent pitch and tone will help your cat recognize that you’re addressing them directly.

Sounds That Make Cats Come To You

If “here kitty” doesn’t engage a response from your cat, it might be time to try something new.

Understanding the sounds that make cats come to you is a useful skill to learn. Not only can you get their attention when you need them, but it can make putting them in their cat carrier or preventing them from escaping so much easier.

Many people think it’s impossible to train a cat, but that’s untrue. Dog-training methods won’t work as cats need the motivation to stick around.

Here are some tips to get your cat’s attention using sounds:

A cat’s hearing is better suited to high-pitched sounds.

To get its attention while calling your cat’s name, start using a higher voice than your voice naturally allows and keep repeating it.

Over time, whether it understands its name or not, it’ll understand that you’re calling out to it directly. And if you have more than one cat, use slightly different pitches for each pet so that your cats can differentiate between the names.

When used with positive reinforcement, clicker training can teach your cat to come to you using sounds.

If you’re unfamiliar with what a clicker is, it’s a small plastic device that’s used to signal when an animal has done the right thing.

The easiest way to start is by getting your cat to associate the sound of a click with a treat. This allows it to acknowledge that it’s done what you wanted it to, giving it an incentive to carry on.

However, as few people have a clicker, you can easily train your cat using human sounds instead. Whether it’s a whistle or a click of the tongue, this sound can be used in place of a clicker.

Do Cats Understand No?

It takes time, patience, and effort to teach them to understand when you’re telling them to stop misbehaving. The problem with using the word no alone is that your cat has no way of understanding what you’re trying to tell them.

Cats will hear that you’re making a loud noise and become confused by it. Even if you manage to get them to stop misbehaving occasionally, they’ll likely continue to display bad behaviors when you’re not there to tell them off because there’s no context behind why you’re upset.

The next time your cat starts scratching your sofa or carpet, say no in a loud, firm voice. Pick it up, moving it away from the spot of the misbehavior while saying no a couple more times. Repeating this will help the cat get used to the sound, associating it with being told off.

Consistency is key, so keeping up with a regular training routine will alert your cat when misbehaving. Be definitive with the sound you make so that it knows that it can’t get away with its bad habits.

Expect to see results within 3-4 weeks. Positive reinforcement is a good technique to use, so if your cat starts behaving well when you’ve asked it to, reward it with a treat.

Another method is to look your cat directly in the eyes when it misbehaves and hiss. Mimicking feline behavior is an easy way to shut down bad behavior.

Cats understand the word no, but only after they’ve been taught. Uttering a meek no to stop bad behaviors before shouting at your cat out of frustration will cause anxiety and stress.