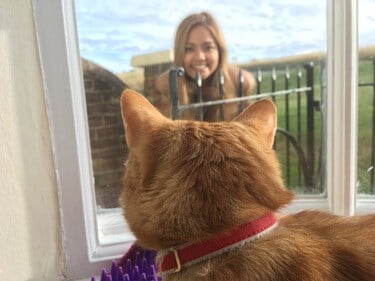 Cats recognize their owners’ voices, but that doesn’t mean that cats always come over when called. Whether it’s down to their personality or an unwillingness to respond, it takes human interaction for cats to become responsive.

Your cat will come to you when you call once it understands its name and has an incentive to do so, such as treats or petting. While cats don’t understand the concept of a moniker, using a high-pitched tone that’s different from your natural voice will mean that the cat associates the sound of its name with your call.

Teaching your cat to come when called is a relatively simple task, but you’ll need to use clicker training for it to work. Unless your cat understands when you’re calling it, it’ll ignore you. Start the training early for the best results.

Do Cats Come When Called?

Some cats respond when their owners call them. That’s because many of them recognize their names from other words. According to Scientific Reports, a team of researchers discovered that cats could distinguish their names from general terms, even when the words uttered were unfamiliar.

As mentioned, cats don’t understand the concept of their name, but they become more familiar with the sound when their owners frequently say it. However, cats only come when called when the delivery’s right with a consistent pitch and tone. Doing so will enable your cat to realize that you’re addressing it directly.

According to Animal Cognition, researchers tested several cats and found that they responded to their owners’ voices 75% of the time. They even ignored the voice of strangers, suggesting that they’ll respond to people they trust when called. You must build this trust with your cat first, though.

If your cat doesn’t respond to you, it’s possible to train it to come when called. A loud or aggressive tone will make your cat feel threatened, so avoid using harsh-sounding words when speaking to your cat.

Why Doesn’t My Cat Come When I Call?

Not all cats respond to their owners calling them, despite how hard they try. An element of training is needed to get cats started. However, if you’ve noticed your cat’s stopped coming when called, there are various reasons why. Some cats also go through phases of aloofness. If you’re patient, it may start responding to you again.

Cats have earned a reputation for being aloof. That’s because if your cat doesn’t want to come to you when called, it won’t. You should see signs that your cat’s heard you, though. For example, its ears will twitch and its head may move. It may also partially open its eyes if it’s sleeping.

Before you get annoyed at your cat for being rude, you must remember that cats aren’t motivated by the same things that we are and don’t have the same level of interest. Don’t take it personally as your cat doesn’t need the same amount of social interaction as you.

If you don’t incentivize your cat to come when called, it has no reason to respond to you. Most cats are motivated by either food or affection, so they need at least one of those things to come to you when you call it. It’ll just ignore you otherwise.

Cats require more sleep than we do to build and conserve their energy to hunt. While tempting, you shouldn’t disturb a cat in its vital sleep stages. Even the light sleep stages are crucial for energy conservation. Cats and kittens can sleep for up to 20 hours a day, which is normal, so only call your cat when it’s awake and alert.

Cats experience a vast spectrum of emotions, including anger, irritability, and fear. If your cat’s not in the right mood to socialize, it will ignore you when you call it. It’s best not to keep calling your cat when it’s in a bad mood. Depending on its personality, you may be greeted with unwanted aggression.

As mentioned, many cats won’t respond to you if they don’t realize they’re being called. That’s why training is vital for helping cats understand when you’re communicating with them directly. Otherwise, they’ll ignore you.

Perhaps one of the more obvious reasons your cat doesn’t come over to when called is because it can’t hear you. Senior cats are most at risk of hearing issues, which is a natural part of aging. The signs of deafness include:

You can test your cat’s hearing by clapping your hands while your cat faces away from you. If it doesn’t respond, get a vet to run some tests on its hearing.

Why Do Cats Not Listen?

It’s frustrating to be ignored by your cat when you’re trying to get its attention. However, it’s important to understand that many cats ignore their owners because of evolution.

Cats have been domesticated for approximately 10,000 years when humans first realized they could use cats to remove rodents from their grain stores. In return, cats received food, warmth, and shelter, so the relationship began symbiotically once humans and cats recognized that it was mutually beneficial. This explains why cats are often seen as stubborn, especially as many owners expect them to react in the same enthusiastic way that dogs do when called.

Cats are also solitary mesopredators, which means they’re independent. While some feral cats live in groups, they’re more than happy to live alone. This is also a reason why they don’t listen when called. Your cat isn’t necessarily not listening to you, it just doesn’t need to hear what you’re about to say.

How To Make a Cat Come To You With Sounds

Cats won’t always know to come to you straight away. “Here, kitty, kitty” may be enough to engage a response in time, but unless you use sounds that are easy for your cat to understand, it won’t respond when you call.

The benefit of using sounds that cats can recognize is that you’ll encourage your cat to do more things, such as preventing it from escaping or getting it inside after dark.

Cats are easier to train than you may think, so if you’re wondering how to make a cat come to you without treats, use these sounds the next time you want your cat to respond to you and keep repeating them to create familiarity.

Cats respond far better to high-pitched sounds as they’re more likely to get their attention. When calling your cat’s name, use a higher pitch than your voice naturally allows and repeat it over and over to allow your cat to get used to the tone.

Your cat may learn its name, but not all do. Don’t fear, as it’ll still understand that you’re calling out to it to get its attention. If you have multiple cats, try using a slightly different pitch for each one to allow them to differentiate between their names.

Clicker training is an effective way to teach cats to respond to sounds when used together with positive reinforcement. A clicker is a small plastic device that owners can use to signal when their cat’s done something right.

With frequent and consistent training, you can teach your cat to associate the sound of the clicker with getting a treat. This is also where you should start your training. Every time you click the clicker, give your cat a small treat to incentivize it to carry on.

If you don’t have a clicker, you can use your voice instead. A whistle, click of the tongue, or any other distinctive noise will work well and do the same job as the device. Once you’ve chosen a sound, stick to it for consistency.

If you stick with these training techniques, you can train your cat to understand what you’re saying, making it more likely to come when called. However, stick to methods that work specifically for cats, as they won’t respond to training regimes designed for dogs or other animals.

Using “pspspsps” is a common way to beckon cats over when they don’t understand other sounds. This is primarily because the sound operates at a much higher frequency than most other words.

Cats can hear frequencies up to 85kHz, which is much higher than a human’s 20kHz. Because this abrupt sound isn’t commonly heard in a typical environment, it catches the attention of cats.

Rodents also communicate in higher frequencies, so cats have evolved to detect their sounds to hunt effectively. As soon as your cat realizes the sound doesn’t signify a threat, it will investigate.

Can You Teach a Deaf Cat To Come When Called?

Whether your cat’s born deaf or develops hearing problems later on down the line, it’s possible to get its attention, even if it can’t hear. All it needs is a strong visual cue that’s designed solely to “call” your cat. This could be a flashlight or a flickering of lights going on and off. You might also want to try waving your hand in the air.

Similarly, even though deaf cats can’t hear, they can feel vibrations. As a result, you can attempt to get your cat’s attention by stomping the floor. These methods will require an element of training – replacing these cues with a clicker works well.

Getting your cat to come when you call it isn’t an impossible task, but it does require some dedication and an element of training. Consistency is the key, but check your cat’s mood when getting its attention. If your cat doesn’t want to know, you should try again later.