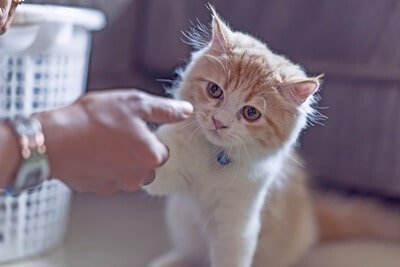 The key to disciplining a cat isn’t punishing bad behavior so much as encouraging good behavior. Cats respond best to positive reinforcement and redirected negative habits.

The most effective methods of disciplining cats include creating diversions, assertive commands, clicker training, and rewarding good behavior. Cats can understand “no” and respond well to time-outs. Your cat needs to associate an undesirable behavior with an unwelcome consequence.

With these techniques, you can teach a cat not to bite you, scratch items it shouldn’t, and not poop outside its litter box. Let’s explore commands that can keep your feline well-behaved, as well as techniques.

Do Cats Know When They’ve Done Something Wrong?

Cats don’t know when they’ve done something wrong because it’s not bad behavior in their eyes. Cats are intelligent animals, but they can’t comprehend what’s right or wrong.

However, if you wonder, “do cats know when you’re mad at them,” the answer is yes. Cats can tell that they’re in trouble or that they have done something wrong through your response to them.

For example, if your cat eats something it shouldn’t have, it won’t know it’s wrong. However, if you discipline your cat afterward, it may learn that it did something wrong.

While cats may not distinguish their actions, they know when you’re mad at them about something. They pay attention to their owners’ emotions. Cats show different behaviors when their owners smile at them. So, they pay much more attention to a positive attitude than a negative one.

Do Cats Understand When You Scold Them?

Cats don’t understand when you scold them or tell them off. Scolding makes sense to humans, but it won’t make any sense to your cat because it lives in the moment.

When you scold cats, they have no idea why you yelled at them. Your cat might start avoiding you or feel uneasy around you. Also, scolding can make your cat jumpy and sensitive to movement or the presence of people.

According to the Journal of Feline Medicine and Surgery, some cats respond negatively to fear and anxiety by displaying overtly aggressive behavior.

These behaviors include biting, scratching, or attacking. In contrast, others respond by freezing (becoming immobile, silent, and wide-eyed) or engaging in displacement behaviors, such as frantic grooming.

Your disciplinary action should never involve scaring your cat or engaging its freeze response, as this will only result in more bad behavior going forward.

Do Cats Understand “No”?

Cats can learn to understand the word “no.”

For example, you may use the word “no” frequently and loudly every time your cat displays undesirable or unsafe behavior. From here, it will be easy for your cat to recognize and understand.

You should teach your cat to associate this word with things it’s not allowed to do or places it cannot go to. Keep in mind that simply saying “no” will not provide immediate results. Your cat must first learn that “no” means it must immediately stop what it’s doing.

For example, you should react immediately if your cat begins scratching the living room couch. In a loud and firm voice, say, “No!” Next, pick your cat up gently and repeat the word two or three times. Redirect the cat to a safe scratching spot, like a cat tree.

To successfully teach your cat to associate “no” with stopping, you need to repeat this process every time you need your cat to stop doing something or going somewhere. If you ignore this behavior, you’ll fail to establish the boundaries needed to teach your cat what is and isn’t acceptable.

When you tell your cat “no,” make sure you don’t yell or sound angry or aggressive. Be firm. If you sound angry, you will only scare your cat. Scared cats that develop anxiety issues display an entirely new set of unwanted behaviors, such as excessive meowing or spraying.

Do Cats Understand Time Out?

Cats do understand time-out. With consistent use of time-outs and other discipline and encouragement techniques, you can train your cat to behave the way you want it to.

Your cat will respond to time-outs if you use them correctly and consistently. If a time-out is too short or too long, it will have the opposite effect of what you intended.

A time-out is nothing but a disciplinary tool that allows them to calm down. It won’t work if it is too short because your cat probably won’t have calmed down. If it is too long, your cat might get annoyed or angry.

Don’t get discouraged until you’ve tried out time-outs at least three times with your cat. If they don’t seem to work after you’ve done them several times consistently, your cat isn’t responding well to this technique.

Does Ignoring a Cat Work?

It just builds frustration if your cat doesn’t know any other way to behave or if you’ve rewarded it for its behavior in the past. Frustration can lead to increased bad behavior, including increased aggression and lower tolerance.

With that said, ignoring certain bad behaviors can be a useful tool. You should only use it in particular situations and along with other steps for it to be effective.

Here’s when you should never ignore your cat:

Cats can understand all sorts of commands, like rolling over, sitting, staying, or shaking a paw.

Cats may not process human language the same way that humans do. Still, they can recognize and respond to human vocalizations, gestures, and expressions (depending on whether they feel like it).

Every cat will react differently when you give a command. Some will ignore you or look at you like you’ve gone crazy, while others will be curious and eager to learn more.

When teaching commands to your cat, teach them one at a time. Not only are they good habits to form, but they can influence how easily you’re able to correct bad behavior in the future.

You can encourage your cat to see your hands as rewarding. To discourage biting behavior, dab some homemade or store-bought treat paste at the back of your knuckles.

Say “gentle” repeatedly as your cat licks your hand. Pull your hand away calmly if your cat begins to nip or bite. This will teach your cat to associate the command “gentle” with no nipping or biting.

“On Your Mat and Stay”

This is a more advanced trick, but it helps when your cat misbehaves and needs to be put in a time-out. Start by laying a flat mat on a couch, counter, or tabletop.

When the cat steps on the mat, make a clicking sound and throw a treat slightly away from the mat. If your cat wants another treat, it’ll come back to the mat for the next round. At this point, introduce the command “on your mat.”

Once your cat returns to the mat and stays there, introduce the “stay” command. Use the mat to encourage your cat to stay in one location while you’re busy.

If the cat misbehaves by knocking things off countertops or scratching what it shouldn’t, you can tell it to go to its mat and stay. Here, it can calm down and leave once you’ve indicated that it can.

“Come” is the easiest command to teach your cat. It’s also vital for discipline, as you can coax your feline away from anything it’s destroying or sitting on when it’s not supposed to.

To teach your cat this command, pair positive experiences and the shake of a treat cup with the word “come.” You can do this by putting treats in a cup or container and shaking it until your cat recognizes the sound.

When it recognizes the sound and comes to you, click and reward it. Slowly increase the timing between saying “come” and shaking the treats until it starts coming on cue.

How Do You Discipline a Cat for Biting?

Biting starts as playful behavior in kittens, but your young feline may carry it into adulthood if you do not curtail it.

Here are three techniques that you can use:

When your cat suddenly decides to munch on one of your body parts, say “ouch” or “no” loudly, even if the bite didn’t hurt you. Don’t scream, as it may upset your cat and cause it to bite again. Then, gently pull your body part away from your cat’s mouth. Don’t yank it away, or your cat might continue biting.

If you notice that your cat only bites you when you pick it up, stop constantly picking it up. Instead, allow it to come to you when it’s ready. Some cats don’t like to be overly handled and petted.

You can chastise your cat for biting like a mother cat usually does. When your cat bites you, grasp it by the neck and gently push its face to the ground while saying “no” in a loud and firm tone. Keep your cat in this position for a few seconds, and then let it go.

You can punish your cat for biting you by leaving the room whenever it repeats the behavior. By walking away, you’ll show your cat that it’s going to lose its play companion if it sinks its teeth into your flesh.

Don’t punish your cat by sending it out of the room, as it may provoke it to continue biting. The best thing to do is remove yourself from the situation.

How Do You Discipline a Cat for Scratching?

Is your cat scratching your carpets or carpets? Here’s what you can do to prevent this from happening again:

How Do You Discipline a Cat for Pooping Outside The Litter Box?

You need to potty-train it to use the litter box. However, if your cat suddenly stops pooping in the litter box, there may be an underlying reason for it.

Here’s what you should do:

How Do You Discipline a Cat for Attacking

Cats attack humans and other pets when they feel fearful, defensive, or territorial.

Some cats attack when they want to play or when they get all worked up about something. Some cats also attack when you stroke them or touch them repeatedly. Pain irritates many cats, and a cat that doesn’t feel well is likely to attack.

If your cat looks scared or feels threatened, leave the room and let it be. If it seems angry or defensive, offer a toy as a distraction. If that doesn’t work, give a time-out and isolate your cat in another room so that it can relax.

Never hit your cat or fight back if it attacks you because this will only encourage the behavior.