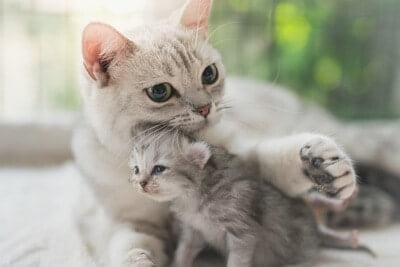 The most important part of a cat’s life is the first 2-7 weeks. After a healthy socialization period, a kitten will have stopped nursing, learned how to play with others without being too rough, and read feline body language. After the 7 weeks have elapsed, it becomes harder to teach a cat how to behave. Mother cats (queens) socialize their kittens and correct any negative behaviors.

Mother cats punish the bad behavior of their kittens the moment they occur by removing themselves from the situation, vocalizing, hitting, and biting. A queen may escalate the corrective measures if a kitten has trouble understanding the lesson. Biting is the most severe form of chastisement.

Different disciplinary methods guarantee that the kitten learns what’s appropriate, both with its littermates and other adult cats. Kittens’ socialization is an extremely important process, and without it, cats have more difficulty handling stress and will engage in more problematic behavior.

How Do Mom Cats Discipline Kittens?

Mother cats, also called queens, discipline their kittens, but not in the traditional sense of the word. They do so by giving the misbehaving kitten a reaction, such as:

However, cats don’t consider these reactions a punishment but corrective measures.

The difference between disciplining and correcting is that disciplining isn’t always done the moment the kitten misbehaves while correcting is. Disciplining also involves taking away certain privileges, which is common with human children but completely absent with queens and kittens.

Cats don’t understand punishment because they don’t have the cognitive abilities to differentiate right from wrong. So, they don’t learn lessons through punishment.

Correction doesn’t always mean punishment but adjusting the behavior to condition the kitten to do what it’s supposed to do. Mother cats do this by giving the misbehaving kitten a negative reaction, and this reaction guides the kitten’s actions so that it learns appropriate behavior.

That’s why it’s so difficult for owners to correct bad behavior in kittens and adult cats. We take the disciplinary approach instead of the corrective one.

If your cat urinates on your bed, yelling at it or putting it in a cage for a few minutes won’t work. Because it can’t associate your reaction to what it did, it’ll just learn that urinating on your bed is preceded by attention from you. Consequently, it might do it again when bored.

This allows the kitten to connect the dots and learn proper etiquette while in your home.

How Do Mother Cats Correct Their Kittens?

Cats aren’t as aloof as we think, and they love getting attention from the people and cats they love. By distancing themselves from their kitten, mother cats deny them the attention they want. This teaches the kitten what is appropriate and what isn’t.

Vocalization is another common correction method. When kittens insist on being naughty, the mother cat might have to give a verbal warning in the form of a yowl or low mewl.

Hissing shouldn’t be considered a corrective vocalization method used by mother cats. According to the Journal of Veterinary Science, cats’ hissing is an agonistic, involuntary reaction.

If the kitten is naughty and the mother cat hisses, it’s not because she wants to correct the behavior. She just automatically reacted that way. Hissing does work to teach the kitten a lesson. However, it’s more of an accidental slap on the wrist than a kitten-rearing method used by queens.

Hitting and biting are used as a last resort by queens. If the lack of attention or vocalizations doesn’t work, the mother cat will have to knock some sense into the kitten by hitting it over the head or biting it.

Such strong corrective measures connect the action to the reaction in the kitten’s mind. This helps the kitten remember which actions are appropriate and which aren’t much sooner.

Mother cats will scold their kittens using vocalizations, such as moaning or yowling. Researchers classify both sounds as agonistic, and it’s used when a cat wants to warn or threaten another cat.

Hissing cannot be considered a scolding technique because it’s a completely involuntary reaction from cats. Think of it this way: If a kid went up to you and scared you, the scream you produce from being surprised isn’t scolding. However, the words that come after are.

Cat moans are long, of low frequency, and often sound like the letters “u” or “o.” Their mouths will open and close as they make this sound. So, if you notice a mother cat doing this with her kittens, she’s scolding her kittens.

A yowl is another form of vocalization that cats use to mildly threaten another cat. It’s a long, drawn-out sound that can vary in tone, length, and intensity.

When distancing themselves isn’t enough, the mother cat will use vocalization to let the kitten know that it’s behaving inappropriately. Vocalization is a more effective technique as it allows the kitten to connect the mother’s reaction with its behavior much better.

Mother cats will bite their kittens to correct their behavior, as well as to pick them up or keep them still while they’re being groomed. Biting may seem like an aggressive form of disciplining a kitten, but it’s an effective method. That’s especially true if the kitten didn’t heed previous warnings.

A quick bite to the neck lets the kitten know that the mother cat is annoyed. When faced with such strong emotions, the kitten learns its lesson sooner.

Biting the kitten’s neck is also how mother cats carry the kittens around. When carrying her kitten, a mother cat will gently pick it up by the neck.

Adult cats are skilled at controlling their bite force, especially when socialized. Being picked up by the neck by their mother doesn’t hurt them in any way unless the mother’s using excessive force.

Mother cats will bite their kitten’s neck to keep them still while grooming. The kitten may want to run off and play during bath time, so the mother will bite its neck until it understands that it can’t play yet.

Is It Bad If a Mother Cat Sometimes Bites Kittens?

The only time a mother cat biting her kittens is bad is when it hurts the kitten. Mother cats will bite their kittens to correct misbehavior, but it’s only a quick nip, and they usually only begin doing it once the kitten is older.

When some mother cats feel threatened, their maternal instincts can go out the window. When this happens, they can accidentally hurt their kitten out of fear. If you’re unsure if your queen is biting her kittens out of aggression, you must check for certain signs.

Early warning signs that the queen is going to attack the kitten include defensive signs, such as:

As an owner, you need to ensure that the queen feels comfortable caring for her litter. However, if she’s already being aggressive toward the kittens, you need to check for:

If you conclude that your queen is biting out of aggression, you need to remove the kittens from her care. If the kittens are very young, you need to find another nursing queen to take care of them or hand-feed them yourself.

How Do Mother Cats Teach Kittens Not to Bite?

Mother cats don’t teach kittens not to bite outright, as biting is an important part of cat communication that means many different things. However, they teach kittens bite inhibition, which is the ability to moderate their bite force.

Bite inhibition is an important part of kittens’ socialization, as it teaches them how to play with others without hurting them. When kittens play with their mother, if the kitten bites too strongly, the mother will let it know that it wasn’t an acceptable level of force.

The mother cat might stop playtime by disengaging and ignoring the kitten. Other times, she might bite the kitten back or warn through vocalization. Over time, the kitten learns what kinds of bites are acceptable during playtime and which ones will bring playtime to an end.

Don’t try to teach a kitten not to bite at all and allow the queen to teach it bite inhibition instead. Cats get stressed easily, and play fighting with bites is a way to build a bond with their playmate and de-stress.

By teaching it that biting is bad, you may have reduced its ability to de-stress properly, manifesting in extreme aggression.

Can a Misbehaving Kitten Learn to Behave Without a Mother Cat?

A kitten can learn to behave without a mother cat, but it’s more challenging because of how aggressive cats can be when they lack socialization. According to Behavioral Processes, cats that weren’t socialized as kittens display more antagonistic behavior.

Even if you used the same methods that the mother cat uses on her kittens, you can’t substitute the guidance of another cat. However, it’s still possible to train a kitten to behave properly. This involves taking a look at how mother cats discipline their kittens. This will enable you to learn how to properly train a kitten and correct any misbehavior.

Only correct the kitten at the moment the misbehavior occurs. When scolding, use a low voice, and don’t drag it out for too long. If you use your scolding voice too much, the kitten will no longer associate it with something bad and might even misbehave to get your attention.

Certain disciplinary methods are exclusive to mother cats, such as neck biting. However, vocalization and disengaging are the best ways to discipline a misbehaving kitten.