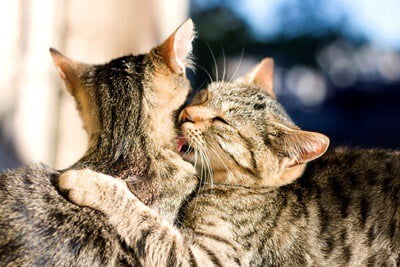 Cats groom each other once they’ve bonded together. This means that they’re comfortable in each other’s company, so you’ll often see one cat licking the other’s face and ears. It’s a shock when something happens and the fur starts flying. Your two friendly cats are now fighting.

It’s rare for two cats that dislike each other to perform social grooming before fighting. This seemingly aggressive play includes kicking, pawing, rolling around, and chasing each other. All of the rough and tumble is not real fighting, just playfulness between two cats.

We’ll explore why social grooming is important for two cats to get along well. We’ll then examine why some cats suddenly become aggressive and the key differences between fighting and playfulness.

Table of Contents show
1 Purpose of Grooming in Cats
1.1 Why Do Cats Groom and Then Fight?
1.2 What’s The Difference between Play and Fighting in Cats?
1.3 What Are the Most Common Reasons Why Cats Groom Each Other?
1.3.1 Bonding Exercise Between Two Cats
1.3.2 Both Cats Are from The Same Litter
1.3.3 Shared Affection Between Two Cats
1.3.4 Acceptance of a Second Cat
1.4 Do Cats Socially Groom Other Animals?

Purpose of Grooming in Cats

Before looking at why cats fight, it’s necessary to address why cats groom. While quite a ritualistic exercise, all cats spend a large portion of each day going through their fur and cleaning any reachable part of their body.

While licking is the primary action associated with grooming, cats will also bite tangled fur and dig deep to locate fleas and skin irritants. If you have ever watched a cat groom, you’ll realize that it’s a long and detailed task to complete this process.

The Washington Post details the cat grooming process and the social aspect of the behavior itself.

The act of grooming in cats goes far beyond the simple notion of using the tongue to clean. Like many aspects of the animal kingdom, there’s often far more involved from a behavioral standpoint than meets the eye.

Cats also know that they can always groom when they have nothing else to do. Many times, grooming is a fixed exercise that cats can rely on to keep themselves occupied.

It’s common for a cat to use grooming to ignore an owner’s request. Grooming can be used as an act of busy work and a stalling tactic. Yes, cats really are that smart.

Excessive grooming can be the result of an intense emotional crisis. The pulling and removal of fur can occur when a cat has difficulty adjusting to an environmental change.

For example, introducing a new kitten to the household can cause stress for a senior cat.

Why Do Cats Groom and Then Fight?

The best way to explain the act of grooming and fighting is the old adage of too much of a good thing. Why do cats lick each other and then hit each other? Patience has been lost, so the good has gotten old and tiresome.

Although social grooming is an act of bonding, every cat reaches a point where it has had enough. Think of it as a hug that has lingered for too long.

Hissing, squealing, slapping, etc., can be unleashed at that point. This is where an owner must step in and make peace between the two agitated felines.

A lack of patience is the tipping point. Because cats are naturally curious animals and also like to walk to the beat of their own drum, the act of another cat messing with them for too long can lead to annoyance.

If it appears that your cat is telling your other cat, “I’m going to lick your neck clean before I bite it,” you’re probably not too far off.

Grooming followed by fighting can result from an illness or disease detection. Although rare, some cats may stumble upon a flesh wound or infection in the cat they’re grooming. Once an area (or smell) of concern has been found, this may halt grooming and take a more stern and standoff-ish approach.

What’s The Difference between Play and Fighting in Cats?

Play fighting involves rolling around, grabbing, kicking with rear feet (bunny kicking), and quickly rising and chasing one another around your home or play area.

For the most part, no sounds of discomfort or anger are displayed. It’s also common for kicking and grabbing to halt suddenly, and both cats are entirely relaxed and resting together.

Real fighting is quite different. An altercation is far more aggressive, deliberate, fast-developing, and nearly impossible to break up. The cats will chase each other, tackle, and resume aggression. Screams and squeals are the vocal byproducts.

The longer you own your cats, the easier it’ll be to stop a fight. While some play fighting can get a bit too rough, there’s still a stark difference between the two types of behavior.

Although possible, two cats that have it in for each other will rarely engage in social grooming. If two cats are at odds, the last thing you want to do is be touched by the other cat.

If your cats are grooming and then begin fighting, they’re engaging in fun and aggressive play. If two of your cats are scuffling (at play or otherwise), never walk away while it’s in progress.

The American Society for the Prevention of Cruelty to Animals (ASPCA) takes an in-depth look at feline aggression and how it can be managed.

What Are the Most Common Reasons Why Cats Groom Each Other?

Social grooming occurs for a variety of reasons:

Grooming is a form of bonding. That’s why cats that enjoy grooming each other will rarely engage in a real fight. If your cats groom each other, this means that a lot of love and trust has been developed.

The two cats view each other as family. Grooming, in and of itself, is an exercise in trust. Why do cats lick each other’s ears? This is due to confidence in the group dynamic. Plus, licks to the face are a cat’s favorite area to show affection.

Both Cats Are from The Same Litter

Social grooming tightens the bond within the family. Do you have young cats from the same litter and one older cat? The act of a kitten licking an older cat means that the senior feline has been accepted into the family.

Social grooming is a vital connection between kittens and adult cats, most notably the mother. This is a display of affection, as well as dominance and territorial marking.

It serves to warn others that kitten X is part of a specific family. The scent associated with licking is so strong that a mother may reject her own if the kitten’s scent has not been changed enough.

This implies that the bond between a mother and baby can be broken if territorial markings haven’t been established.

Acceptance of a Second Cat

Social grooming is also a form of acceptance of a new cat to your household.

If your cats are interested in the new arrival and begin to smell and lick them, that’s a sign of acceptance and protection. The family scent has been transferred by licking and grooming the new cat.

Do Cats Socially Groom Other Animals?

Why does my cat groom my dog? Your dog is part of your cat’s family. While that may seem strange, trusting cats will accept almost anyone.

This is why it is common to see shows on television about how cats and ferrets are best friends or how a senior cat is best friends with a bearded dragon.

If the trust and social bond are there, cats will lick and groom other animals. Two cats that groom each other and then fight is just part of the complex relationship that felines enjoy with each other.