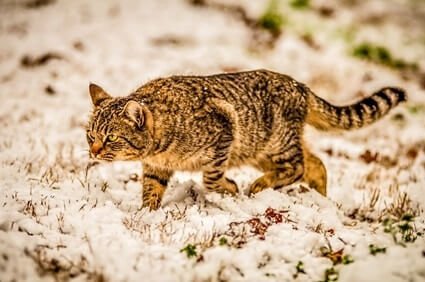 Have you ever tried to play with your cat only to find it suddenly kicks its hind legs at you? Not only can this hurt, but bunny kicking usually signals the end of your game.

To bunny kick, a cat will roll onto its back so that it has access to all four paws. Harm can be inflicted on an adversary by holding its opponent with its forelimbs and using its powerful rear legs to kick or rake at its opponent. The objective is to end fights quickly by causing maximum damage.

While a bunny kick can be alarming, the answer to why cats kick with the back legs is a fairly simple one. Either your cat is engaging in playful behavior, or it’s warning you to leave it alone.

Table of Contents show
1 What Is Bunny Kicking in Cats?
1.1 Why Do Cats Kick with Their Back Feet?
1.1.1 Fighting
1.1.2 Playing
1.2 Playfulness vs. Aggression
1.3 Can I Prevent My Cat from Bunny Kicking?
1.3.1 Discourage Hunting Behavior
1.3.2 Don’t Use Cat Nip-Infused Toys

What Is Bunny Kicking in Cats?

A bunny kick is usually seen during playtime. A cat will grab its intended target, such as your arm or a toy, with its two front legs before repeatedly kicking with its hind legs like a bunny.

A bunny kick can hurt somewhat, especially if your cat’s claws are unsheathed. It can also be difficult to unlock your arm from your cat’s grip once your cat has grabbed hold of it.

To release your arm from your cat’s grip, relax as much as you can. If you’re able to, pull yourself from your cat’s grip. Stop if you feel its grip tighten, as this means it’s not willing to let you go. If your cat doesn’t release, you may need to distract it with a toy or something it enjoys playing with.

Why Do Cats Kick with Their Back Feet?

A bunny kick can be an act of aggression or a playful act.

All members of the feline family perform it as the bunny kick has been part of a cat’s evolution and enables it to survive in the wild. It’s a tactical self-defense move and hunting maneuver.

Wild cats will perform a bunny kick to capture and subdue their prey. A bunny kick won’t always kill a prey animal, as cats sometimes like to save food for later.

The maneuver will inflict enough damage to the prey to ensure it can’t escape. Then, a cat may decide to have fun with its prey by batting it around and kicking it with its hind legs before eating them.

If a cat needs to fight off another feline or defend itself against a predator, it will roll onto its back during an attack. While this may look like the cat is submitting, it’s actually quite the opposite.

Lying on its back allows the cat to use its claws and teeth at the same time. It also allows the cat to grab its foe with its front paws, leaving its hind legs free to kick its enemy’s exposed stomach. This fight is usually over quickly once the bunny kick is unleashed. This move is designed to inflict maximum damage because cats don’t like to fight for long.

Unneutered male cats will often fight with one another over a female cat in heat. Using the bunny kick will help gain dominance over the enemy, allowing the victorious animal to reproduce with the female cat.

A bunny kick is also a distance-increasing mechanism. A cat will perform this move to defend itself from your touch if it’s not in the mood for interaction. It’s a cat’s way to tell you to stop what you are doing.

While it may be tempting, a cat rolling onto its back is not always an invitation for you to give them a rub. Instead, it’s indicating that it feels comfortable around you, meaning it doesn’t feel threatened.

Since most domesticated cats don’t need to defend themselves from predators, bunny kicking can be playful. In fact, it’s one of the first things kittens will do with each other when learning to wrestle with their littermates.

Much like when dealing with a predator, a cat will roll onto its back while grabbing its littermate with its front paws. The cat will then finish by kicking the other cat with its hind legs.

In this scenario, the cats are playing and exploring their instincts through fun interactions with one another. If kittens engage in this way without hissing or aggression, they’re just playing and are OK to carry on.

A cat will use the bunny kick when playing with humans, too. Cats are good at tricking their opponents into thinking they’re resting. If you fall for this and begin to rub a cat’s belly, it’ll grab your hand the second it gets the chance.

Cats will do this with their toys. They’ll treat the unfortunate stuffed toy in the same way as their prey, gripping them tightly and not letting them go until they grow bored or believe they have subdued their toy.

Analyzing your cat’s body language is the best way to tell if your cat is playful or aggressive. If your cat’s ears are pushed back, its tail is swishing wildly, and its eyes are dilated, these are all signs that your cat is feeling agitated and stressed. If so, it’s wise to back off and leave your cat to cool off.

If your cat is looking relaxed with ears in its natural position, it’s likely your cat wants to play. Try throwing your cat its favorite toy so that it can bunny kick that instead of your hand or arm.

Can I Prevent My Cat from Bunny Kicking?

While it’s rare that your cat intends to hurt you with a bunny kick, it’s understandable that you’d want to stop it from getting into the habit. When it gets too rough, it can bite or scratch you.

You may face a problem trying to stop your cat from bunny kicking because it’s an instinctual movement. When cats were wild, only the best hunters could survive. A bunny kick is a hunting maneuver to capture prey, so it’s hard to stop.

Perhaps you encouraged your cat to attack from a young age. While this was not your intention, kittens quickly pick up on hunting behaviors. While playing with your cat, you may have encouraged play by moving your feet around under the duvet or using your finger to entice your cat.

Unfortunately, all this does is breed predatory-style play. Your cat may begin to ambush you in seemingly unprovoked attacks because it now associates your movements with these behaviors.

Try not to get involved in aggressive play with your cat. Being too rough with your hand, or roughing up your cat during playtime, could result in a reaction of self-defense, ending with a bunny kick.

If your cat is in the mood for stalking, get it a stuffed toy that it can practice its sneaking on. Avoid toys stuffed with catnip that will make your cat go a little crazy.

In Companion Animal Psychology, it was explained how the classic catnip response includes bunny kicking while rolling around and drooling. As this is something you’re trying to avoid, catnip will only encourage unwanted bad behavior.

Even if your cat is exposing its belly to you, few cats like having their stomachs rubbed. You’ll likely find that a bunny kick is a direct response to you touching this sensitive and vulnerable area.

While it may be tempting to give your cat’s abdomen a delicate rub, it’s best to avoid this area completely. This goes for most cats, as you’re likely to receive a painful bunny kick to warn you to get off.