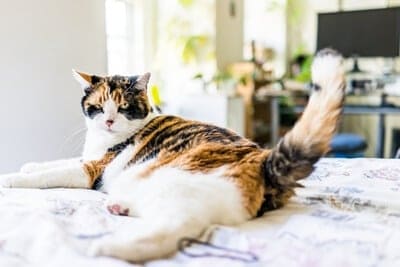 Many cues about cats’ emotional state revolve around how their tail is moving. This includes tail-wagging, shaking, and thumping. When paired with other signs, you can determine if they mean happiness, excitement, or agitation.

Cats wag their tails while lying down when they’re happy and relaxed. Purring and slow, gentle swaying of the tail will be further evidence. If the cat feels playful, it’ll swish its tail with its eyes wide. If the cat is wagging its tail while lying down because it’s stressed and agitated, it may hiss or move away when you reach for it.

Cats also wag their tails while playing, being petted, and in pain. Each of these will have its own associated signs, like lethargy and lack of appetite for pain. A cat that wiggles the tip of its tail may be ready to pounce. If just the tip of the tail flicks, this can mean that it’s acknowledging you but choosing to ignore your call.

Why Do Cats Wag Their Tails When Being Petted?

If you notice that your cat wags its tail when being petted, there are two reasons:

You can tell the difference based on other behavior. If the cat is wagging its tail because it’s happy, it’ll:

Of these signs, the speed of the wagging is the most important. If its tail is moving slowly and consistently or thumping on the ground gently, it can mean the cat is happy and relaxed.

According to the Journal of Zoology, purring is also a laryngeal sound made by cats to communicate affection, happiness, and contentment.

If your cat is grumbling or growling rather than purring when you petted it, this is a sign that it’s unhappy with the attention. Here, the tail wagging speed is more likely to be sharp, choppy, and irregular.

Cats that are wagging their tails as a sign of annoyance may display facial signs of irritation. These include:

Do Cats Wag Their Tails Involuntarily?

Cats often use their tails on purpose. However, due to the tail’s nerve endings and muscle groups, it can also move involuntarily. Whether a cat wags its tail intentionally or by accident depends on what stimuli is around the cat.

According to Animals, there’s strong evidence that cats use their tails on purpose when communicating with humans. That’s because they use tail body language more often than with other cats. For example, cats commonly approach humans with their tails upright and gently wagging as a way to greet them.

When cats deliberately wag their tails to greet a person, show affection, or signal happiness, they’ll display other positive behaviors. These include:

These behaviors can be a voluntary display of affection and an involuntary reaction to happiness and excitement.

However, a cat wagging its tail due to negative feelings is more likely to be doing so as an involuntary stress reaction. The exception is when a cat has repeatedly shown other signs of aversive behavior or negative stress reactions.

For example, if a cat moves away from being petted, flattens its ears, or hissed, its jerky, quick tail wagging could be a calculated way to say back off.

Why Do Cats Wag Their Tails While Playing?

Take note if your cat is lying on its belly when it starts to wag its tail in an energetic motion or begins to thump its tail on the floor. It may be getting ready to play.

Cats may wag their tail involuntarily when concentrating on stalking prey, either for play or in earnest. You will be able to tell if this is the case quite easily, of course, because playful cats are hard to ignore.

For example, cats that want to play will have wide eyes and large pupils. They may also start to chatter if they are feeling playful. Chattering is a behavior that sees a cat opening and closing its mouth rapidly while making a chirping or squeaking noise. Cats usually do this when they can see but not reach a prey animal.

Additionally, the cat may wriggle its butt or pad its back feet and move its shoulder blades. All of these signs of playfulness stem from a cat’s natural, predatory instincts. For this reason, they can also be a sign that a cat is about to pounce, either on a toy or on a prey animal.

Why Do Cats Shake Their Tails Before Pouncing?

When cats feel playful or are in stalking mode, it’s common to see them shaking their tails. They may also flick the tips of their tails or even shake their butt.

There is no simple, scientific reason why cats shake their tails and butts when preparing to pounce. However, there are a few plausible theories.

For example, cats might shake their tails and wiggle their butts involuntarily when concentrating on prey. However, they could also be preparing their senses, proprioception, and muscles for the explosive movement to follow.

Likewise, their wiggling their rear end or pushing at the floor with their legs while getting ready to pounce or play could be giving them a more stable footing. It might even be stretching the muscles out.

Why Does a Cat Wag the Tip of Its Tail?

According to Animal Cognition, cats often gauge their feelings about a situation by considering how humans react. As such, the speed, intensity, and range of motion displayed when your cat wags, twitches, or swishes its tail have meaning. It often communicates the feline’s present thoughts or feelings.

If your cat is making small twitching motions with the very tip of its tail, it’s concentrating intensely. This is either because it’s playing or stalking something.

However, very small wags (jerky and fast, or slow and smooth) can indicate irritation and annoyance. For example, if you call your cat while it’s relaxing or concentrating and it simply twitches its tail in response. It could be saying, “I hear you, and I’m choosing to ignore you entirely.” At this point, it might be best to leave the cat alone.

Do Cats Wag Their Tails When They Are in Pain?

A cat may wag its tail to show that it’s in pain. However, this isn’t the most common and reliable signifier of pain in felines. A cat twitching or wagging its tail as a reaction to pain will display many other signs of discomfort.

The motion is likely to be slow or heavy and inconsistent in its tempo. For example, the sudden and otherwise unexplainable change in a cat’s temperament can also indicate illness or unseen injuries causing pain.

According to the University of Lincoln, this is usually matched with:

In terms of body language, pain is likely to be accompanied by:

Cats in pain are likely to hiss or growl when handled or are otherwise avoidant when it comes to touch. Illness, by contrast, is more likely to present itself as floppiness, lethargy, or unresponsiveness.

So, feline body language is complex. From the tips of their ears to the tip of their tail, cats communicate their feelings and needs clearly with an intricate array of expressions, sounds, and movements.