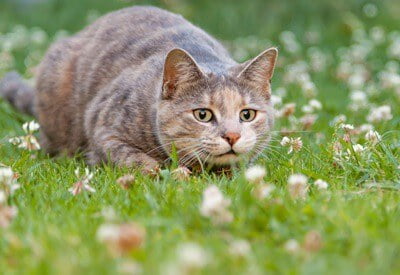 Wiggling typically means your cat’s getting ready to pounce and attack. Cats pounce on prey, their favorite toys, and their owners. Although, some cats abandon the pounce altogether after wiggling their bums.

Cats wiggle their rear ends to gain traction before they jump. Moving their back legs also allows them to determine what kind of terrain is underfoot. Doing so enables them to check their balance and perform a more solid leap. It’s possible that wiggling stretches and warms up the muscles to prevent injury. Cats also experience a surge of adrenaline before pouncing, so wiggling could be a display of their excitement.

Research is limited for this feline behavior, but there are several possible reasons why felines wiggle their bums before attacking. Every cat has its own personality, so the motivations will inevitably differ between each one.

Table of Contents show
1 Why Do Cats Wiggle Their Bums Before They Pounce?
1.1 Checking Balance
1.2 Preparing Muscles
1.3 Traction
1.4 Sensory Function
1.5 Over-Excitement
2 Is the Bum Wiggle Learned or Instinctual?
3 Why Do Cats Like To Pounce?
4 Are My Cats Playing or Fighting?
5 Why Does My Cat Pounce On Me at Night?
5.1 Bored
5.2 Agitated

Why Do Cats Wiggle Their Bums Before They Pounce?

A common question many owners ask themselves is, why do cats shake their tails before pouncing? Unfortunately, researchers haven’t discovered the exact reason just yet, so all we have are explanations from leading experts. The most common theories as to why they do it include:

Whenever cats go to pounce, they wiggle their hind legs to check their balance, ensuring they’re rooted to the ground. This is especially important in the dark when cats don’t have use of their entire vision.

Wiggling also helps them test the solidity of the ground. If there are loose rocks or an uneven patch that throws them off balance, they’ll change position or abandon their jumping attempt altogether.

Wiggling their bums also helps them determine whether they’ll make the jump they’re about to attempt. Not making it could be disastrous, and the cat could hurt itself. As a result, this balance-checking movement could be an integral part of its instincts.

Cats require strength and agility to make a successful leap. The muscles do most of the work, so cats must warm them up properly to execute the jump. It’s thought that cats wiggle their bums to stretch their legs, ready for action.

Think of it like a golfer shuffling their legs or a track runner jumping on the spot before powering into action. When cats leap, they turn into athletes, so they need to fully prepare their muscles to prevent injury and soreness.

Another theory as to why cats wiggle their hind ends before attacking something is because it helps give them traction. According to Live Science, cats gain enough friction to push themselves forward into the pounce by pressing their hindlimbs into the ground. This helps make their jump bigger and better.

If this theory is true, it means that cats don’t wiggle their bums for any reason to do with their hind ends but because they need to utilize the ground beneath their feet.

When cats leap, they use the force of their back legs to propel their bodies forward. If they were to slip on the ground, they risk hurting themselves. Similarly, their bodies could twist mid-air and ruin the leap. By testing the ground beforehand, they’re able to get themselves into a better position to attack, ensuring greater hunting success.

Bum wiggling could have sensory purposes, preparing the cat’s vision, proprioception, and muscles for the rapid neural commands they need to pounce.

It also helps them adjust their position. Every time they take the weight off their paws, they move them by millimeters. They won’t pounce until their senses and body are in the correct position to execute the perfect jump.

When cats hunt and play, their bodies release dopamine into their system. This chemical plays a significant role in how cats feel pleasure and is responsible for the reward-motivated behavior they display.

Cats may give their hind legs a wiggle before playing or hunting to release enough energy to hone the attack. As soon as they catch their prey, the body stops releasing dopamine, which means cats no longer need it.

Similarly, cats enjoy playing, and doing so gives them plenty of enjoyment and enrichment. When the adrenaline gets pumping around the body, they’re bound to get excited at the thought of catching their ‘prey.’

Is the Bum Wiggle Learned or Instinctual?

Animal experts don’t currently know whether cats wiggle because of their instincts or because they learn it from other felines. The reality is, it’s likely to be a combination of both. When cats and kittens play, they learn how to hunt. This process:

Kittens learn from their mothers. They observe the actions they make and imitate them. This process gets them ready for independence and ensures they’re prepared to go out and hunt by themselves. The more the mother cat wiggles her bum, the more often her kittens will, too.

Cats pounce on all manner of things, including toys, prey, and their owners. If your cat routinely pounces on you, don’t take it personally – your cat is merely practicing its hunting skills.

Pouncing is an integral part of a cat’s instincts, particularly in the wild when they need to hunt to eat and survive, and is something they’re programmed to do.

As kittens grow and develop, pouncing is one of the main ways they play with one another. Kittens born into a domestic home have the same instincts as wild kittens. However, these instincts might weaken slightly as the cats grow older. Cats commonly pounce when they are:

When preparing to pounce, kittens will attempt to wiggle their bums and leap. But instead of jumping high into the air, they’ll only reach a few inches off the floor. It’s also highly likely they’ll lose their balance while they practice their newfound skills.

You can encourage your cat to pounce by using laser pens, toy mice, or feather chasers. This will help teach it the hunting skills it needs to thrive.

Are My Cats Playing or Fighting?

When you have multiple cats, it’s sometimes difficult to determine whether they’re wiggling their bums to attack angrily or are merely getting ready to play. While we all want our cats to get along, that’s sometimes not the case. As described by Veterinary Clinics of North America, aggressive feline behavior types include:

Paying attention to your cats’ body language can help you figure out whether they’re firm friends or sworn enemies. For example, if the leap is accompanied by hissing, growling, or biting, you likely have a feline problem on your hands. Other signs of aggression include:

If you notice any of these signs while your cats play together, they’re likely fighting for dominance over the other. Not all cats get along, so this is, unfortunately, relatively normal.

In contrast, playful cats tend to take turns to leap at each other. One will be at the bottom of the wrestling display before they switch places. They’ll also take short rest breaks. The most noticeable signs that your cats get along is that their bodies remain relaxed, and they keep their ears in a neutral, upward position.

Why Does My Cat Pounce On Me at Night?

It can be frustrating when your cat pounces on you at night. In the day, you can tell when your cat’s about to do so because it’ll wiggle its bum before making its attack. At night when you’re drifting off or already sound asleep, you won’t see this, so it can come as a shock when your cat rudely wakes you up.

As a result, it’s only natural you’ll want to stop this. If your cat pounces on you at night, it’s most likely because it’s:

While Wildlife Research suggests that cats are primarily nocturnal, cats are crepuscular, which means they’re more active and alert during the twilight period of dawn and dusk.

Cats that are allowed outside enjoy the peace and quiet of the streets at night and burn their energy by going outside to roam.

However, indoor cats or felines that don’t have constant access to the outdoors may become bored. To entertain themselves, they’ll initiate playtime with their owners. If you’re asleep and your cat feels exceptionally playful, it’ll attempt to get your attention by wiggling and pouncing on you.

To help prevent this, play with your cat as much as possible before you go to bed. Allow your cat to wiggle and pounce as much as it wants to help burn its energy.

Frustration and agitation are both triggers for cats to pounce. Cats become more badly behaved at night because owners don’t respond to them while they’re asleep. Also, as we’ve mentioned, cats tend to have more energy at night. This can cause cats to pounce.

Cats are capable of feeling emotions and respond to them in an instinctual way. For some cats, this means attacking their owners. These emotions can be triggered by:

Once you’ve determined the cause of your cat’s agitation, provide it with the things it needs to be calm at night. This should help prevent your cat from pouncing on you while you sleep.

Even though we don’t quite know the exact reason why cats wiggle their bums before attacking or pouncing, many theories make a lot of sense. As mentioned, every cat likely has its own reason. However, based on the fact that cats are expert jumpers, it’s bound to benefit their athletic skills in some way, enabling them to achieve greater hunting success.