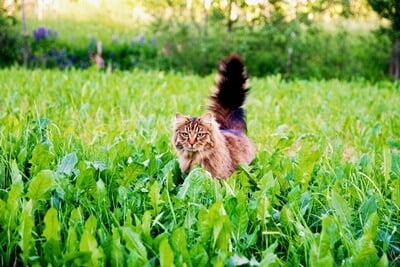 Cat tail language is used to communicate various feline moods. Whether your cat’s tail is twitching, swishing, straight, or curved, each action and position indicates a different type of emotion. A cat’s bushy or puffed-up tail can signal multiple messages. Once you understand the underlying meaning, you’ll be able to interpret your cat’s emotions.

A cat’s puffy tail (piloerection) communicates its emotions, ranging from fear to aggression. You’ll see a cat puffing its tail if it has been startled or if it grows frustrated while playing. If accompanied by puffed-up fur on the body, the cat feels cold and is trying to stay warm.

Cats puff their tails up to make themselves appear as large as possible and ward off predators when scared or frightened. Understanding whether your cat’s tail puffs up due to playfulness and excitement, or fear and aggression, can enable you to determine what can be done to make your cat feel less tense.

What Does a Puffed Up Tail Mean?

Cats are evolutionarily predisposed to performing specific actions that make them look intimidating when faced with a threat. According to The Ohio State University, increasing the volume of the tail makes a cat look much larger.

Therefore, your cat’s tail may be puffy because it detects a threat nearby. This threat can be a startling noise, such as a loud sneeze, or something significant, such as an approaching dog.

Your cat may not even be in danger, especially in the comfort of its own home. However, it is still ancestrally wired to jump to the offensive without the need for a warning. This is because cats are mesopredators. A dangerous predator or a more dominant neighborhood cat can encroach on its territory and pose a threat.

A big, puffy tail is a reflexive body language that scares away other animals higher up in the food chain.

How Does a Cat’s Tail Puff Up?

A cat’s tail appears bigger when the muscles in the skin contract. The contraction lifts each hair away from the skin. This is similar to how humans have goosebumps.

Hair standing upright can trap air inside a cat’s coat, thus acting as insulation to trap body heat. Sometimes, piloerection may occur if a cat is stressed or sick. Your cat may even be having a flashback to a traumatic experience when it was a kitten.

A cat’s hair stands up as a response to hormone signals from the fight-or-flight system or sympathetic nervous system due to stress, fear, and anger. On some occasions, the hair on your cat’s back may stand up along with its tail.

Not all cats respond the same way when they are scared or startled. While some cats puff their tails easily, the tails of other cats may never puff up. Different cats have other ways of displaying their emotions.

Why Does My Cat’s Tail Puff Up?

Piloerection could mean that your cat is under stress. However, it can be hard to identify what type of stress your cat is going through. When your cat makes its tail bigger, it could be for various reasons.

Maybe your cat is being pushed around by a larger feline bully, or it is being attacked, or it’s trying to look scarier to warn a rival to stay off its territory.

Cat is Scared or Startled

A cat may hold its puffy tail straight up or straight down, and both are designed to signal different messages. An entirely straight, puffy tail means that your cat is in offensive mode and is ready to fight.

A lowered puffed-up tail means that your cat is afraid or has detected something that it dislikes. This could be a threat or something that scares it, or your cat may look directly at the threat with its back legs crouched slightly.

If your cat is scared, allow it to get away from the source of fear so that it can return to being its old self. Other signals include arching the back, yowling, hissing, growling, flattening the ears, and spitting.

Cat is Angry or Aggressive

When a cat puffs up its tail and holds it completely erect in the air, it’s telling you that it is getting aggressive and that its opponent or threat should back down.

If another cat or a person annoys your cat, a straight puffed-up tail says “back down” or “Stop; I don’t like what you’re doing.”

Your cat may also push its ears back. Sometimes, an aggressive cat will not only puff up its tail but its entire body. Constricted pupils are another common sign.

In addition to looking bigger and more threatening using its tail, your cat may also indulge in a staring competition or yowl, hiss, and growl until the opponent or your cat surrenders.

Most cats prefer to use overly dramatic bluffs over fighting. Fighting is more of a last resort in case both opponents don’t back off.

Cat is Ready to Attack

If your cat puffs its tail while arching it, then it’s about to attack. When a cat shows aggression towards another cat, it must be told/shown that it is not okay. If your cat is preparing for a fight, make a loud noise to deter the behavior.

According to the Journal of Abnormal Psychology, encouraging a cat to pounce on or bite another person rewards it for such actions.

If your cat is threatening another person, let your cat know that it must stop what it is doing and leave the area. Provoking your cat further and staring at it is almost guaranteed to result in an attack.

Moreover, if you’re wondering why your cat’s tail puffs up when you’re trying to pet it, it could mean it’s in an aggressive mood. Again, it’s best to back off and leave your cat alone until it decides to come to you for rubs.

This is slightly different from your cat’s aggressive position. It’s easy to get confused because both stances can look almost the same, but they mean the opposite.

The difference between the “big tail” stance and your cat’s aggressive posture is that your cat is in a positive mood while exhibiting the former.

Your cat may have a bushy tail while playing or chasing toy prey. A playful tail is often completely straight and slightly rounded. Even adult cats puff their tails during play. According to Gary Landsberg et al., play behaviors in cats are similar to their predatory behaviors, including stalking, pouncing, chasing, and biting.

To determine whether your cat feels happy or angry, pay attention to its posture and body movements. A “big tail” stance is often accompanied by a relaxed body, whereas aggressiveness always occurs with body tightness, muscle tension, ears flattening, or flaring backward. An aggressive posture will suggest backing off or say “I’m about to attack you.”

If your cat is relaxed, it is not going to attack you. Therefore, let your cat do its thing and continue playing in its own way. Other indicators for playfulness in cats include whiskers pointed forward, erect ears, and dilated pupils. These behaviors are often followed by squatting, wriggling the puffed-up tail, and pouncing at the play opponent or toy.

Cat is Being Submissive

Your cat may be puffing up its tail as a sign of submission. Cats usually do this to avoid confrontations with a more dominant opponent. When your cat is submissive, it will puff up its tail and lower it, sometimes even tucking the tail between the legs. This is similar to how a cat behaves when feeling scared or afraid.

What To Do When Your Cat Puffs Its Tail

If your cat is puffing its tail because it has been startled, ignore it and allow your cat to calm down on its own. However, if your cat puffs its tail as a sign of aggression toward another pet, consider keeping them in separate rooms for a short period. Slowly introduce both animals, supervising them carefully. Avoid trying to force them to interact or play together all the time.

If it is something else, such as an inanimate object, take the item away from your cat to help it calm down. Your cat may be puffing its tail because it is scared of the neighborhood cat. To make your pet feel better, consider closing the curtains so that it cannot see the other animals in the yard or the neighborhood.

If you have a cat that is shy, easily scared, startled, or excited, consider offering it a safe and comfortable place to retreat to. This can be a kitty condo, a cat tree, or a high cat perch. A quiet, cozy place away from the hustle and bustle of your household can help your cat feel safe, reduce its stress and minimize aggressive situations with other pets.

Cats enjoy startling each other during play. A cat playing alone may place itself in situations that will stimulate the hairs on its tail to stand up. If your cat is acting playfully while frightening itself into bushy-tailed exhilaration, let your cat continue playing.

Things to Lookout For

When a cat is stressed, it can take some time to calm down fully. Your cat may spit, hiss, scratch, bite, puff up, dilate its pupils or exhibit other unusual behaviors for hours after the situation. Sometimes, such behaviors can last for days. It depends on how long it takes for your cat’s hormone overload to wear off.

Be careful when approaching your cat or handling it, as this could startle your cat again. Unless your cat is injured, you should give it time alone, even it means hiding away from other members of the family.

Why Doesn’t My Long-Haired Cat Puff Up Its Tail?

If you have a long-haired cat and a short-haired cat, you may notice that the latter puffs up immediately when excited during play, while the other appears to look the same. This is common in long-haired breeds because their fur may be too heavy to be pushed straight up.

From an evolutionary perspective, when cats had to look out for themselves in the wild or alleys, puffing up the tail and looking bigger to scare off opponents probably served them well. However, this tactic may not be as effective among cats that are pampered and kept indoors.

There is no reason for house cats to maintain this ability. Therefore, there are no shortcomings attached to long-haired breeds not being able to look menacingly bushy.

1 thought on “Why Do Cats Tails Puff Up Suddenly?”