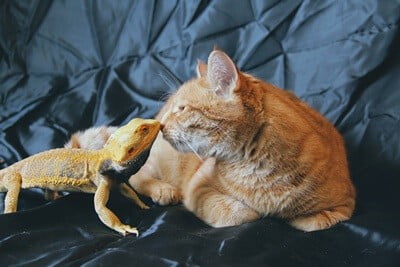 Cats can be tenacious hunters, making it difficult to keep them in a house with small animals. Docile, easy-going, and friendly, bearded dragons are popular pets. However, they’re lizards, which cats are known to hunt. This can leave you concerned that your cat will attack or kill your bearded dragon.

With proper introductions, cats and bearded dragons get along well. Cats are less likely to see beardies as prey than other lizard species due to their size, smell, and movements. Inter-species compatibility comes down to temperament, and they mustn’t be left in the same room without supervision.

Avoid pairing bearded dragons with kittens, aggressive cats, or cats with strong hunting instincts. Beardies are tolerant but can still get stressed to the point of illness if they’re constantly tormented and antagonized. Also, they’re mildly venomous, which can be dangerous to kittens.

Can Bearded Dragons Live With Cats?

There are many households where beardies and cats co-exist or even appear to be good friends.

In fact, you can find pictures and videos online of these pets spending quality time together:

Although you’d expect bearded dragons to be the prey of cats, this is rarely the case. Both animals seem to keep themselves to themselves, so they’re able to live side-by-side in relative harmony.

If you’re considering adding a second animal to your feline household, bearded dragons can be a good choice due to their gentle nature.

Any interest that bearded dragons show in cats will be friendly and curious. Paired with a cat’s indifference, these two animals can live together without confrontation and fighting.

Of course, inter-species compatibility comes down to the individual animals’ personalities, so introductions should be controlled, and they shouldn’t be left alone together without supervision.

Bearded dragons and cats get along because their personalities mesh well. That may be surprising since cats aren’t exactly known for their friendliness with smaller animals.

Bearded dragons are among the friendliest animals, even beyond the reptile world.

They’re known for their gentle nature and show affection by softly nudging other creatures with their heads. Due to their placid personalities, cats have little reason to see beardies as a threat.

Bearded dragons are among the most tolerant animals in the reptile world. Beardies aren’t known to lash out or become hostile, so they don’t mind interacting and playing with a curious cat.

Cats will appreciate this level of tolerance when they first meet bearded dragons. Felines need time to explore and adjust and aren’t immediately accepting of new animals.

A bearded dragon’s easy-going demeanor can make for a good friendship with a cat.

Bearded dragons are among the few openly affectionate reptile species. A few gentle rubs on their legs, back, and ears will be appreciated.

For a cuddly lap cat with a relaxed temperament, bearded dragons make the perfect companion because they can lounge in the sun, cozy up together, or sleep in your lap.

Cats have sharp teeth and claws. Although bearded dragons have thick skin and can bite, they’ll stand little chance against an average house cat.

So, you need the right cat and bearded dragon combination. Some cats that won’t get along with beardies, and that’s more if one or more of the following apply:

Bearded dragons don’t resemble a cat’s normal prey, nor do they behave like it. However, cats with a strong prey instinct will hunt anything that moves, especially if they feel hungry.

If your cat regularly hunts birds and mice, it’s unwise to pair a bearded dragon with a cat. If you do, they can live in the same home, but you’ll need to keep both animals separated at all times.

Kittens are more energetic than adult cats, so they’re prone to antagonizing, pawing, and biting as a means of playing together. This can be an exhausting and stressful experience for beardies.

It may cause your beardie to bite, which can be harmful due to the presence of a mild venom.

Some cats hate sharing their space with other animals. Some cats will be aggressive toward newcomers, whether it’s a second cat, a dog, a smaller animal, or a bigger animal.

Suppose your feline is highly defensive of its space, scares off other animals, or starts fights with other pets. In that case, it’s usually unwise to get a bearded dragon or any other animal companion.

Can Cats Get Salmonella from Bearded Dragons?

Bearded dragons can transfer salmonella bacteria, which is commonly found in raw meat and undercooked eggs.

Much like hedgehogs (another popular feline companion), a healthy bearded dragon can live with salmonella asymptomatically, but it negatively affects humans and other animals.

Symptoms of salmonella infection include:

Bearded dragons, and many species of lizards, shed this bacteria in their feces. If your cat develops salmonella after interacting with its habitat or poop, your bearded dragon may be responsible.

Are Bearded Dragons Venomous To Cats?

Although it surprises many owners, bearded dragons are venomous. This venom isn’t potent enough to harm people, but it is enough to kill small pets. For this reason, it’s important to make sure the bearded dragons won’t interact with kittens. Their faster metabolism, smaller size, and delicate immune system are more vulnerable to the bite.

Adult cats can survive a bite from a bearded dragon, and some may even shrug it off without your noticing it. To be sure, you should monitor the cat after it’s had a nasty tangle with a bearded dragon. If it manifests signs of lethargy or illness, contact your vet.

Bearded dragons very rarely bite. In fact, they bite so rarely that they were considered non-venomous until 2015. At this point, Australian scientists discovered they do secrete a mild venom when attacking certain prey or defending themselves. It’s such a small dose that it rarely harms large animals or people.

Additionally, most bearded dragons only have one venom gland, and only the eastern bearded dragon has two, so repeated venomous bites are unlikely.

According to the Journal of Pure Applied Microbiology, bacteria from the beardie’s mouth will be the main danger. Most cats will weather this just fine, and conflicts will be rare. Keep an eye out, but don’t worry too much.

How To Introduce A Cat To A Bearded Dragon

Although this pairing usually works well, bearded dragons and cats shouldn’t just be left together. They’re more likely to fight, play roughly, avoid, and antagonize each other when not properly introduced.

To create a more harmonious relationship, take the following steps:

During their first meeting, the bearded dragon should be kept in a small cage.

If you only have a tank, consider putting your cat in its own carrier. You want them to be separated but still able to see and smell each other.

Allow your cat to approach the bearded dragon or vice versa. The cat will begin sniffing and observing how the beardie moves.

Moving forwards, they won’t be surprised to discover new smells and creatures wandering around nearby. So, they’re unlikely to become stressed, flee from each other, or fight.

If the cat and bearded dragon react calmly, they can meet outside their enclosures. At this point, you should enlist the help of a second person, so you can each hold one animal.

If you don’t have any assistance, hold the bearded dragon and let the cat approach it. Be ready to pull the beardie away if the cat hisses and becomes hostile.

With each pet properly secured, bring the two animals closer together. Start at a distance and move in, so neither pet feels rushed or threatened.

Let the cat and bearded dragon sniff each other and continue doing this until both animals feel comfortable and show no signs of hesitation or aggression.

Once both your bearded dragon and cat feel comfortable with each other, you can let them play.

Repeat the last step and allow both animals to sniff each other. Then, lay down a comfortable blanket, and place some toys that your cat and bearded dragon are familiar with.

Set both animals on the blanket next to each other. Let the cat and bearded dragon react to the other’s presence. This can mean more sniffing or lying down; they should look comfortable or indifferent.

Cats and bearded dragons are compatible pets. As long as you supervise any playtimes, introduce them properly, and select animals with the right temperaments, this combination usually works well.