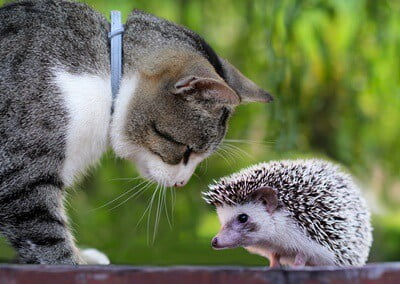 Hedgehogs are 20-30 cm long with short legs, cone-shaped faces, and covered in quills. Cats are known to capture, play with, and kill small animals. So, if you own a cat and want to get a hedgehog, you’ll need to know if these two species can live together.

Once introduced, hedgehogs and cats can live together. Most cats will investigate a hedgehog, but its quills will keep a curious feline at a respectful distance. Any interaction between them should be monitored. Hedgehogs won’t give cats fleas because their fleas are species-specific.

Hedgehogs and cats will never be best friends, but they’re unlikely to fight. Cats grow bored of animals they can’t play with, and hedgehogs are solitary animals that keep to themselves. You should expect cats and hedgehogs to ignore each other and co-exist peacefully.

Table of Contents show
1 Can Hedgehogs And Cats Live Together?
1.1 Are Hedgehogs Good With Cats?
2 Are Cats A Danger To Hedgehogs?
2.1 Do Cats Attack Hedgehogs?
3 Can Cats Get Fleas From Hedgehogs?
4 Can Cats Catch Diseases From Hedgehogs?
4.1 Salmonella
4.2 Ringworm
4.3 Mites
5 How To Introduce Hedgehogs To Cats
5.1 Introduce Smells
5.2 Allow Both To See Each Other
5.3 Introduction Without Cages
5.4 Allow Them To Roam

Can Hedgehogs And Cats Live Together?

As long as you don’t leave them together unsupervised, a cat and hedgehog can safely share a home.

Hedgehogs can only run at speeds of 4 mph, so they’re never going to be able to outpace a healthy house cat, which can reach 30 mph.

However, there’s little chance that adult hedgehogs will get injured or be killed by a cat’s sharp teeth and claws due to their defensive capabilities.

Hedgehogs can defend themselves from cats in the following ways:

One painful pawing of a hedgehog’s quills will serve as a lasting reminder not to do it again. Once a cat has overcome its initial curiosity, it should accept the hedgehog and leave it alone.

Are Hedgehogs Good With Cats?

Hedgehogs are non-aggressive and won’t attempt to attack your cat.

The hedgehog might wander over to the cat, sniff in its general direction, and watch it for a while. In short order, it’ll get bored and scurry away to relax or find more interesting things to do.

Hedgehogs tend to keep to themselves and don’t require much socialization. Even when housed with others of its kind, a hedgehog will prefer its own space.

Of course, this depends on the hedgehog’s personality. Some are friendly and won’t mind the presence of a cat. Others are more private and will be scared by the sight of larger animals.

Regardless, hedgehogs won’t start any conflict with cats.

Are Cats A Danger To Hedgehogs?

Cats will avoid conflict with creatures that can harm them. Hedgehogs are covered in defensive quills that are sharp to the touch, causing a mild burning sensation for a short time afterward.

Not surprisingly, most cats ignore hedgehogs. Unless they’re extremely hungry, they won’t attack them. Even if they’re curious, it only takes a few painful pricks from the quills for cats to back off.

However, a cat’s long claws, sharp teeth, and speed are significant threats to a hedgehog. If a hedgehog isn’t fast enough to curl up into a ball, it could get badly injured or killed.

Most cats are too cautious to attack hedgehogs as they move oddly, sound weird, and be painful to touch. After a curious prod, the cat will avoid annoying the hedgehog.

Of course, there are exceptions, depending on your cat. Aggressive cats with a strong predator instinct may stop at nothing until their prey stops moving, while others will wait until your hedgehog unwinds from its ball and then launch a stealthy attack before they can react.

If the cat can get its claws into the soft underbelly of a hedgehog, it can end badly. For this reason, even if your cat is unlikely to attack the hedgehog, you should never leave them unsupervised.

Can Cats Get Fleas From Hedgehogs?

Hedgehogs have a reputation for harboring fleas, yet they show no/few symptoms. So, hedgehog fleas (Archaeopsylla erinacei) can thrive undetected. However, hedgehog fleas are species-specific.

If hedgehog fleas hop onto your cat, they won’t survive for long, as the new host isn’t well-suited to them.

Can Cats Catch Diseases From Hedgehogs?

When keeping two species of animals in your home, you need to be aware of communicable diseases.

Here are some common diseases that hedgehogs can give cats:

According to the Cambridge University Press, salmonella is a common illness that hedgehogs can spread. Salmonella refers to bacteria that cause salmonellosis, which affects mammals, birds, and reptiles.

It’s rare for pet hedgehogs to carry this disease; most cases are found in wild hedgehogs. If your hedgehog does get salmonella, it’ll likely be asymptomatic.

The symptoms of salmonellosis can vary from one hedgehog to another. They can be as mild as a stomach ache and as severe as several internal organs shutting down.

The most common symptoms of salmonellosis in hedgehogs include:

Ringworm is a type of fungal disease. While many strands of fungi can be responsible, the most common is trichophyton erinacei, which is prevalent in the western European hedgehog.

The most obvious symptoms of ringworm are seen on your hedgehog’s spine and furry underbelly.

Here are other common symptoms:

In cats, the most obvious symptom of ringworm is patches of ring-shaped markings on the skin. These markings often begin with hair loss and inflammation, worsening to crusty, thickened skin.

Mites are a common parasite that can hop from hedgehogs to cats.

Mites are the cause of many different illnesses, including:

The symptoms of mites will depend on where the infestation is centered. For example, ear mites will cause excessive itching on the ears. Some hedgehogs are more sensitive to bites than others.

The symptoms of mites in hedgehogs include:

How To Introduce Hedgehogs To Cats

Hedgehogs and cats can live peacefully together if you do the following:

Both Hedgehogs and cats navigate the world by smell.

Then, take a piece of fabric that your cat is using and place it in your hedgehog’s enclosure.

Both animals can learn about each other before that tense first encounter.

Allow Both To See Each Other

Put both animals in their own cages or carriers.

When ready, place both animals 10 feet away from each other. Remain at this distance to allow the cat and hedgehog to react, but don’t let them near each other.

If the cat and hedgehog are calm, you can move them 1 foot closer together. If neither can calm down, stop the introduction. You can repeat the process another day when they’re more at ease.

Keep the hedgehog in your hand (using gloves or a towel to avoid getting pricked). Let the cat approach, but be ready to pull the hedgehog away if the cat becomes aggressive.

Let them sniff and look at each other. If either is agitated or fearful, don’t bring them any closer. If they react calmly, let them see each other until one gets bored.

You should repeat this for the next 1-2 days.

Allow Them To Roam

When both animals are comfortable, allow them to mix.

At this stage, remain nearby and separate them if one or both lash out. If they interact peacefully or ignore each other, your introduction has been successful.

Never leave a cat and hedgehog alone together. They can co-exist peacefully, but accidents and rushes of blood happen. By supervising your two pets, you can ensure that they get along without any mishaps.