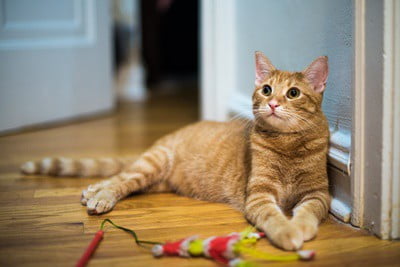 There are times when you need to ignore your cat. This could be because it’s misbehaving, or you’re trying to discourage certain behaviors. However, not all cats will take kindly to this if they enjoy getting attention from you.

Cats all react differently to being ignored. Based on their personality, some will get angry, while others will feel sad. In contrast, some cats won’t care about being ignored and will continue to misbehave. If your cat constantly meows, you should find out what’s causing your cat’s vocalization and address the problem.

Interestingly, some cats view being ignored as a fun and exciting game. They’ll stalk you to gain your attention, eventually pouncing on you as they would a mouse or bird. So, in this instance, not only is ignoring your cat a way to correct bad behavior, but it can also be a way of bonding together.

Table of Contents show
1 Do Cats Know When You’re Ignoring Them?
2 Do Cats Get Mad When You Ignore Them?
3 What Happens If You Ignore Your Cat?
4 When Should I Ignore My Cat?
4.1 Discipline
4.2 Discourage Unwanted Behaviors
4.3 Instinctual Behavior
5 Should I Ignore My Cat Meowing?
6 Does Ignoring A Cat Work?
6.1 Aggression
6.2 Hiding
6.3 Lack Of Motivation
6.4 Your Cat Ignores You Back

Do Cats Know When You’re Ignoring Them?

As described in a journal by Animals, cats entertain social relationships with humans. They’re also sensitive to our communication signals. So, cats can recognize when their owners are ignoring them.

Not only are they impacted mentally, but they’re also affected physically. This means if you’re ignoring your cat as a training tool, it might not be the most effective method. Instead, positive reinforcement works better.

Similarly, once you start showing your cat attention again, it’s likely to continue its bad habits. The worst thing you can do is make your cat feel anxious by paying your cat no attention at all.

Do Cats Get Mad When You Ignore Them?

Despite common misconceptions, cats have a wide range of complex emotions and feel sadness, anger, and happiness. When cats are bonded with their owners, they’re likely to become scared, anxious, and confused at being ignored, especially if they can’t understand why.

If you’re ignoring your cat because it’s misbehaving, you might be fuelling this behavior. Some cats become more destructive to get your attention.

Similarly, not only do some cats get upset when you ignore them, but they also suffer from a form of separation anxiety. While you and your cat might not be physically apart, you’re not emotionally connected. This can upset sensitive cats or felines that crave attention.

Separation anxiety is more likely if you move yourself to another room to ignore your cat. As a result, the cat will become stressed, displaying the following signs:

The problem with separation anxiety is the more you ignore your cat, the more it’s likely to crave your attention, creating a vicious circle of bad behavior that’s difficult to get under control.

What Happens If You Ignore Your Cat?

Cats react differently to being ignored depending on their personality. Some won’t care, while others will drive themselves crazy to get your attention.

You must monitor your pet’s reaction to determine whether it’s fair to ignore your cat or not. If it seems uncomfortable or sad, stop ignoring it, as you’re upsetting your pet. When you ignore your cat, it’ll:

If you ignore your cat often, it may become depressed. You’ll be able to tell because sad cats display the following signs:

However, while some cats get upset by being ignored, some see it as a fun game and may play with you.

When Should I Ignore My Cat?

Cats value their owners’ attention, especially when they’ve formed a strong bond with them. As a result, they’ll work hard to win their affection, jumping into laps, squeezing in between legs, and rubbing their heads against them.

When this behavior is rewarded with a stroke or cuddle, cats feel at ease. However, the point of ignoring a naughty cat is to teach it that it’s been badly behaved, dissuading it from carrying out the poor behavior again in the future. As a result, you can ignore your cat for the following reasons:

Cats are naughty from time to time – it’s in their nature. Most cats don’t do this to be mean. In most cases, they don’t even realize they’re being bad.

For example, cats that scratch the sofa rarely do this because they want to destroy the piece of furniture. It’s because they need to file their claws down.

However, even when you discipline your cat by shouting at it, it’s getting attention. While it’s negative attention, your cat’s likely to repeat the behavior because it knows you’ll react.

As a result, some cats respond more positively to being ignored. Once they realize they don’t have your attention, they’ll get bored and move on.

While your cat may not be misbehaving, there may be certain behaviors you need to discourage. Perhaps you’ve always catered to your cat’s every wish, but now it’s affecting your life.

For example, if your cat wants to be fed at 4 a.m. every morning because this is something you’ve always given into, it’s only natural you’d want to stop this from happening too often. Otherwise, you’ll never get a good night’s sleep again.

Instead of getting up to feed your cat as you normally would, you could try ignoring it for a few days until it realizes that, despite how much it tries, it’s not getting food.

However, for this to work, you must be firm with your approach. Giving in to your cat even once means you’ll have to start the entire process from scratch.

Domestic cats are closely related to their wild cousins. That means they’ve retained many of their instincts. This is something they can’t help. It’s also part of the parcel of owning a cat.

As a result, you shouldn’t try to discourage your cat’s instinctual behavior. Instead, ignore it unless you need to step in to help your pet out of a sticky situation.

Cats put a lot of effort into their instincts and spend time perfecting them. If you notice your cat stalking imaginary prey, leave it be. These instincts help cats survive in the wild, so they’re an ingrained part of their behavior.

Cats will also rag and kick their toys, especially if they have feather parts or look like mice. This is normal – your cat’s just practicing. Taking them away may encourage your cat’s hunting behavior further.

Should I Ignore My Cat Meowing?

Some cats are more vocal than others and will meow to get attention. Unfortunately, catering to your cat’s every wish and whim will only encourage it to demand your attention more often. That’s because it knows you’ll give it what it wants. In time, this behavior could cause your cat to become quite badly behaved.

As a result, some owners must ignore their cat to prevent it from meowing for attention. This isn’t easy to do and may make your cat behave even worse before getting better.

On the other hand, if your cat suddenly meows more often than usual, there’s likely a reason behind it. You should take any changes in vocalization seriously until you get to the bottom of it. Ignoring your pet could put it at risk. Cats will constantly meow because they:

If your cat suffers from a health condition, constant meowing is one of the most common clues. Unwell cats display the following symptoms:

If you discover your cat’s unwell, you shouldn’t ignore it when it meows as it’s alerting you that something’s wrong. Instead, take it to a vet for an examination. As soon as the problem’s treated and your pet feels more comfortable, your cat should reduce the amount it meows.

Similarly, if your cat’s meowing because it’s bored and lonely, ignoring it will amplify these negative feelings. Instead, play with your cat using its favorite toys and shower it with lots of affection and attention.

Does Ignoring A Cat Work?

Sometimes, ignoring a cat is an effective training method in stopping it from being poorly behaved. It works best when the animal is a kitten and more impressionable.

However, ignoring poor behavior only works if you’re consistent in not responding to it. The moment you give in to your cat’s demands, it will work harder to get your attention next time, knowing that its persistence will pay off.

However, if your cat displays the following signs, ignoring it isn’t a suitable training method and can make the cat more poorly behaved:

If your cat feels uncomfortable, scared, or confused due to you ignoring it, it will display its displeasure through a range of aggressive behaviors. This can include:

Not only can this be painful, but it threatens the bond between you and your cat. In the most extreme circumstances, cats may run away in search of a better home.

Cats are aware of our emotions. As described in a journal on PLOS One, cats mirror their owners’ behavior and wellbeing. If you ignore your cat out of stress or frustration, you’re likely to make your cat feel threatened, hence the aggressive behavior.

In this situation, your cat needs attention. Dedicate a small amount of time each day to play with your pet. After all, cats are a long-term commitment and deserve your time. They also need mental stimulation.

Again, if your cat feels uncomfortable or threatened because you’re ignoring it, it will find somewhere safe to hide, tucking itself out of the way. Cats will hide during stressful situations – some cats hate being ignored and will feel anxious. Cats tend to hide:

Whenever your cat hides away after you’ve ignored it, do the opposite and give it attention to assure it that it’s not in trouble. While cats need to learn to be good, they shouldn’t feel scared or threatened because of it. If this continues for too long, your cat may begin to stay out of your way.

If your cat stops doing anything because it’s worried about upsetting you, it’s time to find a new tactic. In this instance, ignoring your cat makes it feel scared of doing something wrong.

As a result, cats will lose motivation and refuse to play. They may also appear lethargic. Though they might not suffer from a physical lack of energy, they’re likely suffering from a loss of mental stimulation.

Again, encourage your cat to start having fun by playing with it and giving it plenty of attention.

Your Cat Ignores You Back

Some cats will respond to you ignoring them by ignoring you back. If your cat’s not motivated by gaining your attention, it won’t care whether you’re aware of what it’s doing or not. That means it’ll continue to misbehave, regardless of your reaction.

As a result, in this situation, ignoring your cat is futile and won’t achieve anything. Instead, you’ll have to find another way to discourage your cat’s bad behavior. You can discipline your cat using the following methods:

While ignoring your cat works in some situations, you can change your cat’s bad behavior using more positive methods. However, if you ignore your cat’s behavior, make sure to continuously monitor its personality for any changes that signify it’s unhappy. That way, you can stop as soon as your cat feels anxious or distressed.