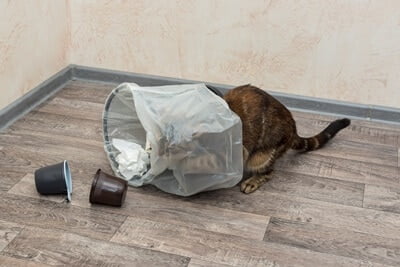 Cats are known for their mischievous behavior. Perhaps the cornerstone of all bad habits is a cat knocking stuff onto the floor. You may find your cat knocking decorations, glasses, plants, water bowls, and cups off the countertop just to watch them fall. Your cat may show no preference over what it knocks over.

The reasons cats knock stuff on the floor include:

You can discourage your cat from knocking items on the floor. Avoid rewarding the cat with attention when it does this, and give it more toys to play with. If it’s knocking items around due to clumsiness or a health condition, always clear your tables, so there’s less to knock over. Whatever’s left behind, ensure that it’s not breakable.

Why Do Cats Knock Things Over On Purpose?

If you’ve ever wondered, “why do cats knock things off surfaces?” you’re not alone.

It’s one of the most common habits that felines have. You may assume your cat knocks over water bowls, glasses, plants, and other objects out of spite.

It’s often due to one of these reasons:

According to Frontiers in Veterinary Science, cats are predators that aren’t as domesticated as dogs.

This means they’ll be driven by some natural predatory instincts, even if they’re not actively preying. Knocking items over is one method of doing this. You’ll often see this in younger cats, although older cats do it too.

This may happen because a cat sees an unfamiliar item in a place where it feels it doesn’t belong. Thus, it feels encouraged to hunt it. A part of a cat’s hunting process is to play with its prey.

This is why you may also see your cat tossing its food around. In the wild, this is to exhaust the prey to make killing it easier. In your home, it results in your things being knocked to the ground.

The solution is to play more hunting games with your cat. By using a laser pointer or a feather on a stick, you’ll be satisfying its instincts and knock fewer things over.

If you’re wondering, “why do cats knock stuff off ledges?” it’s possible your cat is trying to get your attention.

If you’re busy or occupied and your cat wants to catch your attention, it may start toppling items off tables and chairs to earn it. This is rarely the first choice of action, though.

Usually, cats will try to get your attention in other ways, such as:

If you miss these and still don’t give your cat the attention it wants, it may start knocking things over instead.

Naturally, if you hear an ornament or two being knocked to the ground, you may come running (or you may have done so in the past). Having noticed this, your cat will learn that it can knock over cups or other objects and bring you running if it wants to catch your attention.

Though this can be frustrating, try not to show any reaction to your cat. If you do, you may be teaching it that it should knock your things over if it wants your attention, and it may start doing so every time it wants attention. Instead, clean up the area and return to whatever you were doing.

Of course, don’t forget to assess why your cat is seeking attention. If the cat has been more attention-seeking than usual, consider if it’s experiencing any pain or sickness or if it’s bored and lonely.

Some cats knock things over to mark their territory, which is common if your cat doesn’t like to share. If you place something in what the cat considers its territory, it may knock it over to claim that spot.

Avoid placing items in areas you know a cat has claimed. For example, if the feline likes to sleep on a particular spot on your shelf, that is its territory. Placing any items here will result in them being knocked to the floor.

Cats don’t like clutter in their space, but it could serve another purpose too. If your cat sees you paying attention to other items, it may consider them an enemy, so it’ll start knocking them to the ground.

To manage this, you should make sure your cat is secure in its territory at home. Give it somewhere it feels safe.

Cats often knock things over if they think there’s too much clutter. For example, if a cat sees an object and thinks it doesn’t belong there, it may knock it off to ‘clean’ the area. Unfortunately, this means you’ll have to clean up even more.

To avoid this, don’t place any breakable items around, and ensure that your cat knows which surfaces it is allowed on and which it isn’t.

Cats like to play with items if they seem interesting enough. When batting things around, cats release scent from the glands in their paws. Your cat may also sniff and lick the item to stimulate its senses.

In its play, it may knock the item to the ground. When this happens, the cat may either get scared and run or consider it part of the game and find something else to give similar treatment to.

Often, cats will experiment with something just to see the result.

If your cat sees an item sitting on your table, it will be curious about why it’s there. As far as the feline is concerned, this item does not belong here, so it will push it off to see what happens.

In some cases – such as by knocking off a glass item – the sound of the smash may scare the cat into running away. Other times, the cat may be fascinated by it and want to do it again.

Ensure the area is clear of any delicate items to keep them from breaking.

While felines are usually elegant and have grace, sometimes they lose their balance or coordination. Thus, they knock things over by accidentally brushing against them.

This is particularly true for older cats that have lost some mobility. So, they may not have the same sense of depth or distance as they once did. The older cats then make less coordinated movements, which may cause items to get knocked over.

It’s also possible for a cat to knock things over while sleeping. According to the Journal of Sleep Research, cats tend to squirm and thrash in their sleep. If they’re sleeping close to any objects, they may knock them over by accident.

When cats accidentally knock things over, they’re likely to get shocked by the sudden, unexpected noise and run away. If they get shocked enough, they may even avoid the area in the future.

8/ Misjudgment of Distance And Depth

Other times, cats have not noticed that they’re sitting close to any objects.

If your cat thinks it’s at a safe distance, it may relax and start taking care of itself through grooming. This involves a lot of maneuvering and wriggling around, and in doing so, your cat may knock something over.

Misjudging distance and depth is a common reason for this behavior. Of course, it could be a misjudgment in a cat that normally avoids such accidents. However, reduced spatial awareness is common for senior and overweight cats.

Cats make judgments about space with their whiskers. If their whiskers don’t touch something, they assume their bodies will pass through. For overweight cats, this becomes an issue since they are not aware that their body is larger than their whiskers’ range. This can result in the cat knocking over an object accidentally.

Aim to keep breakable objects away from places you know your cat likes to hang around in.

If your cat is knocking over plants and glasses, this could be because your cat is thirsty. That’s usually because cats have a low thirst drive as they glean most of their water from the food they eat, and some cats dislike tap water.

Tap water is treated before it reaches us, so minerals and purifiers may be added to give the water a peculiar smell, which may be enough to keep them from drinking it. Additionally, cats tend to distrust still water sources and prefer to drink from moving water, like rivers and even toilet bowls.

When the cat wants a drink, it may knock over a glass, hoping that the moving water will be drinkable. Similarly, the smell of flowers in a vase makes the water more appealing because of the natural addition of flowers.

You can get a water fountain where the water will constantly be moving.

If your cat is regularly knocking things over for no discernible reason, it may be time to check your cat’s vision.

According to EyeVet, cats’ eyesight declines as they grow older. Indoor cats also tend to be nearsighted since they don’t have to observe any prey or predators.

If this is the case, your cat may knock things off elevated places to ensure it remains safe. Falling objects make sounds, and this sound lets your cat judge the distance between itself and the ground. This tells the cat that it’s safe or unsafe to jump.

If your cat tends to knock things over because of visibility issues, check for underlying medical conditions. Some vision loss due to old age isn’t a cause for concern, but this needs to be monitored for younger cats.

You can also make adjustments in your home to meet your cat’s needs. This can include ensuring the path to its food, water, and litter are clear and do not have any hurdles.

Your cat will memorize this path, and you won’t have to worry about it knocking things out of the way to get there.

How To Stop Cats Knocking Things Over

There’s no way to entirely prevent a cat from knocking objects over.

With that said, there are ways you can avoid harm. For example, keep breakable items away from places you know your cat likes to frequent. Broken shards can end up harming your cat, so you want to avoid this at all costs.

Make your counters and tabletops as unappealing as possible. If your cat doesn’t think there are any interesting items there, it will be less likely to climb up to knock them off.

If the behavior persists, redirect the cat’s attention to something else. That’s especially important when you see the cat’s about to jump up and knock something over.

Ensure that you don’t give your cat the attention it wants if you’re trying to discourage this behavior. If it gets any reaction – whether it’s positive or negative – your cat may make a habit out of knocking stuff on the floor.