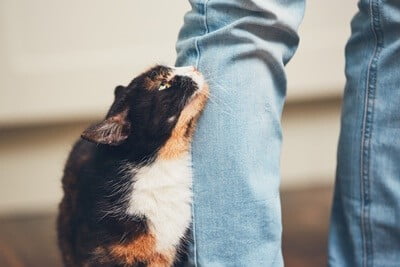 A cat walking in circles around you likely wants your attention. Circling is also a common feline greeting, especially when followed by bunting or rolling on the floor.

There are medical issues that can lead to circling in cats. Feline circling can be due to vestibular disease, which affects the inner ear and balance. Other possibilities include hypertension (high blood pressure), hypoglycemia (low blood sugar), head injury, cognitive dysfunction (dementia), and brain tumors.

A cat circling around you may signify that it’s pleased to see you or that it’s just being playful. However, it’s important to note other unusual behaviors your cat hadn’t previously displayed.

Why Is My Cat Circling Me?

Some cats like to circle their owners as a greeting, especially if the cat rubs against your legs after circling. Your cat’s expressing joy in your presence and asking for attention, so offer light petting and engagement.

Perhaps your cat is herding you in a particular direction. It may have discovered something that it wants to share with you. For example, it could have a dirty litter tray or wants to be fed.

There is a possibility that your cat is acting dominant. It circles you so that it can control where you walk. The dominance can start with circling but later escalate to aggression.

If the cat shows signs of disorientation during or after circling, it may have a medical condition.

Health conditions that cause cats to walk in circles around you include:

We’ll explore each of these conditions in more detail:

Often, a circling cat is excited to see an owner. If your cat circles you upon your arrival home, stand still and enjoy the attention. A cat offering this greeting will likely display these other behaviors:

The cat wants to be acknowledged and enjoy some light petting. Ordinarily, the circling will stop after a few moments. If not, the cat still wants something from you, such as food or playtime.

If your cat keeps circling you, it may be shepherding you in a particular direction.

Allow your cat to guide you in this instance. Remember, cats have excellent hearing. It may have heard something suspicious that you’re unable to hear.

Your cat may have seen or smelled something worrying on your property. Cats aren’t guardian animals in the traditional sense but will take steps to protect their territory.

A cat doesn’t see its owner as a master or superior. Cats consider themselves the equal of humans, which means that a particularly bossy cat may display dominant behaviors.

Circling and blocking are common dominance tactics in inter-cat relationships. The dominant cat is defining where the submissive cat can walk.

In some cases, a cat may attempt this with a human. The circling is intended to stop you from leaving a room. If the cat has been fed and played with, this behavior grows more likely.

Cats rely upon their ears to maintain a sense of balance and coordination. A cat with vestibular disease will frequently walk in circles, incapable of maneuvering in a straight line.

Other common symptoms include involuntary darting of the eyes (nystagmus), head tilting, and vomiting.

The cause of vestibular disease varies between cats. The Journal of Feline Medicine and Surgery studied 77 cats with vestibular disease, most commonly finding inflammation, bacterial, and periodontal explanations.

In the case of Siamese or Burmese cats, the issue was often hereditary. These breeds are prone to vestibular disease and inner ear issues. In some cases, they lost their hearing earlier.

Vestibular disease comes on quickly but passes just as fast. Most cats rid themselves of vestibular disease within 24 hours. A vet won’t prescribe treatment as the concern will clear up on its own.

The most common symptom of mites is a discharge from the ear, along with scratching. In addition, mites can affect your cat’s sense of balance.

In addition to the discomfort caused, bacterial inflammation can spread to the inner ear. This is known as otitis interna, which can become an irreversible issue.

Aside from circling, otitis interna has the following symptoms:

Left untreated, the bacteria that causes otitis interna can lead to permanent damage. The cat may never regain its ability to walk straight. The infection can also spread, resulting in difficulty breathing and an increased heart rate. Permanent hearing loss in the affected ear is also a risk.

Otitis interna can be treated with vet-prescribed bacterial ear drops.

Veterinary Nursing Journal has stated that cats are the most commonly reviewed animal for head trauma.

Cats can experience a blow to the head due to the following:

Feline head trauma often leads to a concussion. If a cat develops a concussion, it’ll become disoriented and confused as the brain and nervous system aren’t communicating clearly.

This could lead to a cat walking in circles while seeking food, water, or its litter tray.

A vet must always see a cat immediately after a head injury. Concussions can lead to swelling within the brain, so scans and x-rays must be performed to check for damage.

Excess blood will rush to the brain when a cat has hypertension (high blood pressure). This leaves the cat feeling confused. It’ll walk in circles and lack basic coordination in its gait, appearing more clumsy than usual.

Hypoglycemia means that your cat has low blood sugar, which is common in diabetic cats. As a cat gets older, it’ll become less active. If the cat’s appetite exceeds its activity level, obesity is likely.

A lack of coordination is a common sign of hypoglycemia. Your cat will grow confused, walking in circles. You’ll also notice muscular tremors and seizures, which are precursors to a hypoglycemic cat losing consciousness.

Other causes of feline hypoglycemia include:

If your cat is aged over 15, it is deemed geriatric. Sadly, this comes with all the same issues that affect aging humans. Chief among these is Feline Cognitive Dysfunction, or cat senility.

A cat with cognitive decline will live in a near-permanent state of confusion. The cat may get up to use the litter tray before becoming disoriented. It’ll walk in circles around you and may eliminate on the floor, unable to remember what it was supposed to do.

As Veterinary Clinics: Small Animal Practice explains, FCD treatment focuses on slowing down a cat’s decline with medication. At present, there’s no cure for this degenerative medical condition.

Not all tumors are malignant. In fact, up to 90% of meningiomas – tumors that grow within the skull – are benign. Unfortunately, a malignant brain tumor will inevitably affect your cat’s behavior.

Brain tumors can be diagnosed through scans, but treatment for a malignant tumor is rarely successful. Tumors are uncommon in cats, and there will usually be another explanation for your cat’s circling behavior.

If your cat walks in circles around you, it’s likely just trying to get your attention or is expressing joy in your presence.