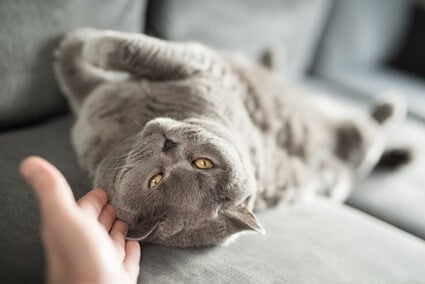 Despite an unfair reputation as cold and aloof pets, cats forge strong bonds with their owners. A great example of this is the happiness cats display upon seeing familiar humans after a period of separation. This often involves a cat rolling over onto its back as you approach.

Cats roll on their backs to greet owners and express happiness at reuniting. Cats often roll onto their back when feeling relaxed and confident. The cat may also be requesting attention, including play or food.

A cat rolling over isn’t requesting a tummy tickle as the belly is the most delicate part of a cat’s anatomy. By showing you this soft tissue, your cat is demonstrating trust in you. Touching the tummy may invoke defensive behavior.

Table of Contents show
1 Why Do Cats Roll on Their Back When They See You?
1.1 Greeting
1.2 Marking Territory
1.3 Requesting Attention
1.4 Defensive Posture
1.5 Entering Heat
2 Why is My Cat Rolling on the Floor and Meowing?

Why Do Cats Roll on Their Back When They See You?

There are many explanations for cats flopping over when they see you coming. Most of these are positive, suggesting that the cat is pleased to see you. This is why the behavior is commonly known as the social roll.

In most cases, rolling over is a sign of joy, contentment, and relaxation. However, the behavior could be misconstrued.

Let’s look at the reasons why cats throw themselves on the floor when they see you:

If you take good care of your cat, it will love you.

Current Biology explains that felines attach to their owners similarly to dogs and human infants. This means your cat will be thrilled to see you after a period of separation, such as returning from work.

Initially, the cat will approach you. This may be followed by bunting or circling behaviors to say hello and mark your arrival. Many cats also adopt the social roll. This is learned as kittens that some felines carry over into adulthood.

There are many reasons why a cat may greet its owner this way, including:

Your cat may want your attention. Cats have adapted and evolved over thousands of years to manipulate humans. If rolling over results in a treat or a scratch behind the ears, the cat will repeat the action.

By bunting with the head and rubbing with the body, the cat applies its scent to your clothing and marks you as its own. Rolling widens the area of claimed territory.

You’ll notice this social roll mostly takes place when outdoors. Within the home, many cats have staked their claim to any territory they desire. Outdoors, other neighborhood pets will attempt to usurp this terrain. This means that your cat will retain constant vigilance for usurpers.

Cats have sweat glands in the cheeks, lips, chin, paw pads, anus, and the top of the head. The more a cat rolls around, the wider it spreads its scent, which is a message to other neighborhood cats. You, and the locations you frequent, have been claimed by your cat.

If a cat rolls over when you return home from work, it’s asking for acknowledgment. If it rolls with regularity on other occasions, it’s likely making a plea for attention or interaction.

Note when your cat rolls over in front of you. Is it when your cat likes to play or around a scheduled mealtime first thing in the morning? These are reminders of your duties. If you respond, it creates a pattern of positive reinforcement.

If your cat is asking to play, it has unfulfilled hunting instincts. Stalking toys, or even a laser pointer, will satisfy these urges, and failure to do so can leave cats feeling frustrated and aggressive.

Most of the time, a cat rolling over at the sight of a human denotes affection. Alas, there are exceptions to every rule, as some cats flip onto their back to adopt a defensive posture.

Cats showing their belly to humans could be a test. Failing it can have consequences, especially among street cats. It’s likely that the cat already feared you on sight. Touching its belly confirmed it was right to feel this way.

Cats lying on their back as a defensive posture may seem counterproductive. After all, we have been at pains to point out how delicate this part of feline anatomy is. This position provides easy access to all 18 unsheathed claws, though.

This makes rolling over the perfect launchpad position for a cat that feels it may need to attack. The claws can be swiped quickly and efficiently, scaring a threat away or causing physical harm if necessary.

If this is making you nervous about cats rolling over, there’s no need. As mentioned, in most cases, this is a sign of contentment.

All the same, learn the additional warning signs of aggression in cats. These include:

If a cat demonstrates these behaviors ahead of rolling onto its back, take no chances. Give the cat a wide berth and avoid touching the exposed tummy.

If your cat is female and unspayed, entering heat is always a consideration. Once a cat reaches sexual maturity, she’ll continue to enter and exit estrus cycles for life.

Cats in heat roll over to show a willingness to mate. If you let your cat outdoors during this period, expect local toms to take an interest. By lying on their back, female cats release a range of pheromones.

The cat may also be rolling to neutralize any scents on her fur. This is so that suitors aren’t deterred by the scent of a rival. Do not be offended if a cat in heat immediately rolls over and grooms to remove the smell of your hands after petting. It’s hard to miss the signs that a female cat is in season. These include:

None of this means that your cat is not also pleased to see you. Rolling is even likelier to stem from affection if your cat is in heat. Felines in estrus are often excessively loving. They also demonstrate wild mood swings, so be careful.

Why is My Cat Rolling on the Floor and Meowing?

As established, the answer to “why do cats flop down in front of you?” invariably revolves around happiness and attention. All the same, be mindful if a cat demonstrates this behavior alongside verbalization.

Cats are slaves to routine, and you may be running behind a regularly scheduled event. Missed mealtimes are the likeliest culprit. Your cat is making itself impossible to ignore so that you feed it.

You must also consider health complaints. If your cat is wriggling and rolling around while meowing, it may have an itch that it cannot scratch.

In the immediate term, provide attention. Pet all of your cat’s favorite spots, most notably behind the ears, along the back, and under the chin. As always, be careful to avoid touching the paw pads and belly.

If this appears to sate your cat, wait for it to calm down and perform a health inspection. Check for any signs of a skin condition. This will commonly be referred to as feline dermatitis.

Symptoms to look out for include:

If your cat has dermatitis, it’ll experience near-constant discomfort, and the skin will itch persistently. The most common reasons for dermatitis are flea bites and food allergies, so take action if you believe they are to blame. As per Veterinary Dermatology, some feline skin conditions are seemingly devoid of explanation.

In most cases, cats flopping on their back when they see you is a sign of love and affection. The cat is expressing joy and happiness in your return.