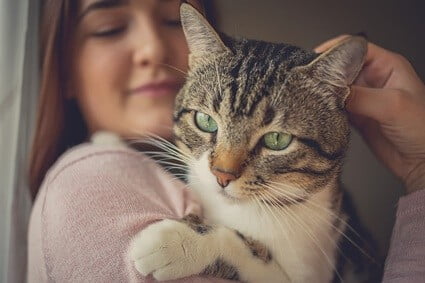 Cat owners rarely enjoy a peaceful start to the morning. Most days begin with a cat staring at you, just inches from your face. In some cases, cats even appear to headbutt you. Contrary to appearances, this is not an act of aggression. A feline headbutt is known as bunting.

Cats have scent glands at the top of the head. By bunting you, the cat is exchanging scents. This is partly to mark you as the cat’s property. It’s also likely that your cat missed you while you were sleeping. Bunting can be a plea for attention. In the morning, a cat is likely requesting breakfast or play. Ensure your cat is not bunting to display dominance.

Do not confuse bunting with head pressing. This is a separate behavior that has negative connotations. It’s important to recognize when a cat is bunting and why. This will lead to a positive bond between you and your cat.

Table of Contents show
1 Why Do Cats Bunt You?
1.1 Showing Affection
1.2 Sharing Scents
1.3 Seeking Food or Attention
1.4 Showing Dominance
2 How To Respond To A Cat Bunting
2.1 Should I Headbutt My Cat Back?
3 Head Pressing vs. Bunting

Why Do Cats Bunt You?

This behavior is most common first thing in the morning. Many feline owners awake to the sensation of a cat pushing its head toward them.

Cats may be born imitators, but this is not an aggressive act. When a cat headbutts a person or object, it is referred to as bunting. This is a common feline behavior that will be observed in all cats. But why do cats bunt?

While sleeping, your cat really missed you. It had been waiting for you to wake up so that you could spend time together.

If the cat is purring while it bunts, moving its head up and down, affection is the likeliest explanation. This love should be returned in kind. Pet your cat and speak to it in a soft, soothing voice.

This will quickly improve the bond with your cat. Even if you would prefer a cat not to bunt, do not make this obvious. Your cat will assume that any display of affection is a form of bad behavior.

Another explanation for bunting is that your cat is sharing scents. As explained by the Canadian Journal of Zoology, cats secrete scents from their heads and faces. Bunting is the easiest way to do this. The cat is mingling its own scent with your scent.

This is partly an extension of the affection that your cat is showing. When you have been sleeping, the cat will notice changes in your scent. Any perfume or cologne will have worn off, and you may have sweated overnight. The cat is covering your aroma with its own.

This is also a means of marking you. Cats apply their scent to things that matter to them, including their owners. By marking you first thing in the morning, the cat is setting a precedent. It is making it clear that it has laid claim to you.

You’ll find this behavior common in multi-cat homes. Felines are hardwired to compete for resources. Do not be surprised if several cats take their turns to bunt you. Alternatively, different cats may bunt on different days. Each cat is trying to stake its claim.

This action should not be deterred or considered a problem. It is an important part of the bonding process between cats and humans. The cat is saying that it accepts you as part of the family.

Many cats look for attention first thing in the morning. Nighttime can be boring for a feline. Cats are not nocturnal but are often active after dark. They enjoy the peace and quiet afforded by life without active humans. After a while, the cat will seek interaction with you.

Some cats will amuse themselves by wandering at night. Others simply stare out of the window. By the time you wake, the cat is ready for interaction. This is especially likely if you have established a play routine or feeding first thing in the morning.

If you have established this routine, do not deviate from it. The bunting is a gentle reminder of your responsibilities. If you fail to meet the cat’s expectations, these reminders will become less subtle. Elongated meows, and even scratching or biting, can follow.

You could also look out for other classic signs of attention-seeking in cats. These include:

A less savory element of bunting is an expression of dominance. Your cat may bunt to ensure that its scent is spread far and wide. This can be that a cat is attempting to exert power over you.

Cats are not pack animals, but inter-feline dynamics do usually involve dominant and submissive roles. A dominant cat may bunt a submissive cat. Grooming by the submissive animal may then follow this up. It’s rare for a submissive cat to groom a superior.

If your cat wants to dominate you, it is not always a problem. If the cat displays no problem behaviors, there’s little harm in letting it feel in charge. This will help the cat relax around you and in the home.

However, cats with excessively dominant tendencies can become bossy and demanding. The cat may harass you for food or attention, growing belligerent if you fail to respond in the required way. As per the Journal of Feline Journal of Medicine and Surgery, dominant cats may resort to scratching and urine marking.

How To Respond To A Cat Bunting

The best reaction to a cat bunting is no reaction at all. Regardless of the meaning, it is advisable to avoid encouraging your cat to bunt you.

If you suspect that the cat is being dominant, you should ignore it. Go about your business and make it clear that the cat is not your boss. You should still meet the cat’s needs, so lay down food or change its litter, but don’t do anything out of the ordinary.

Do not physically restrain the cat or push it away when it tries to bunt you. Instead, make a high-pitched “ouch!” noise. This will leave the cat thinking that it hurt you, and they don’t want to cause you any pain.

Should I Headbutt My Cat Back?

Some, but not all, cats will enjoy bunting. As felines cannot communicate with us in words, they rely on their body language.

However, no matter how strong your bond, your cat will always be a little afraid of you. That’s just common sense; your cat is considerably smaller than you. This means a cat may immediately go on the defensive.

The cat will not necessarily know that you are attempting bunting. All it sees is a larger animal, with a mouth filled with teeth, descending upon it. Survival instinct will then kick in, and your cat may claw, bite, or flee.

A cat pressing its head firmly against you or your walls or floors for a prolonged period of time is not bunting. This is called head pressing. Head pressing in cats is a much more serious problem than bunting.

Head pressing is an attempt at relieving pain, perhaps due to a headache. As per the British Veterinary Journal, these human medications are toxic to cats. The cat will resort to other means to relieve discomfort.

Reasons for feline head pressing include:

As per the Journal of the American Veterinary Association, head pressing is also linked to high blood sugar. Older cats, especially those carrying extra weight, can be prone to diabetes.

A vet will run tests on your cat to determine the cause of the head pressing. Resolution and prognosis depend entirely on this diagnosis. As always, early intervention will yield the best results.

Bunting in cats is usually just a means of displaying affection. If it’s anything else, other behaviors will be displayed. It’s also important to be able to tell the difference between bunting and head pressing.