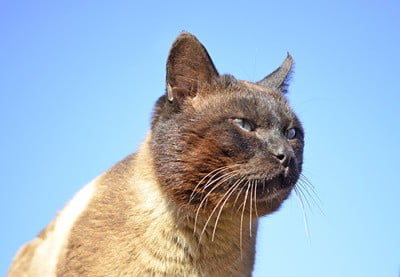 While it might be hard to believe for some, a cat is more than capable of defending you. In fact, a cat can sometimes be almost as protective as a dog. However, it is unlikely a cat will resort to physical aggression unless it’s essential.

While a cat’s natural response is to flee trouble, a cat can defend its owner. There have been instances reported where cats have protected their human owners from criminals and unruly dogs. It is also believed that cats can protect us spiritually from negative energies and evil spirits, but this is unproven. Cats tend to develop closer relationships with female owners, so they are more likely to protect women from harm than men.

Cats and humans have developed a strong bond throughout the ages, since as early as 4400 B.C. So, a cat is likely to protect you if a really close relationship has been established. This isn’t a given as a cat’s loyalty has to be earned.

Would A Cat Defend Its Owner?

A cat’s natural response is to flee, especially if the ‘threat’ is bigger than the cat itself. Cats will try to avoid physical confrontation. In fact, confrontational behavior in cats is passive in nature. Cats will posture and position themselves to send signals designed to reduce the risk of escalation to physical fighting.

That being said, domestic cats value their social group. This includes their human owners. If they sense danger or see their owners come under physical attack, their fighting instincts will be instigated. They may scratch, bite, or hit their opponent with their paws on such occasions.

However, cats are better suited to defending us from natural disasters. This is because they’re able to sense shifts in the energy around them. This can include a change in the weather, undetected diseases, or predators that are lurking nearby. Monitoring your cat’s changing body language can enable you to remain alert to potential hazards.

Signs That Your Cat Is Protecting You

Despite common misconceptions, cats are intensely loyal animals. A study published in Eureka Alert by animal scientist Kristyn Vitale found that, much like children and dogs, domesticated house cats formed secure and bonds with their human owners.

She discovered that most cats are securely attached to their owners and use them as a source of security in a novel environment. About 65% of cats and kittens are securely bonded to owners.

So, when it comes to whether your cat is protecting you, you can be sure that your cat is doing so in its own way. Here are some key behavioral signs:

Cat Follows You Around the House

If your cat is nervous about something, such as someone hovering around the perimeter of the house, it will stay close to you. This is to get your protection but also to ensure that you remain safe.

Cat Hisses or Bares its Teeth

If this is unusual behavior in your mild-mannered cat, something could be wrong. Cats will usually only become aggressive if threatened, and hissing is a way for a cat to scare off its opponent. If a cat doesn’t trust another person or dog that has got too close to its owner, this will be a natural reaction to eliminate the danger.

Cat Gets a Case of The ‘Zoomies’

It’s amusing when a cat starts zooming around the house, but this can be a sign that something’s up. It’s usually to do with the weather. If a cat senses bad weather is coming, it’ll run around to alert you that a storm is approaching. A cat’s hearing is more acute than ours, so heed your cat’s warning and ensure that all doors and windows are closed.

One of the most inspiring stories is of Indianapolis cat, Binky. Cynthia Kootz, Binky’s owner, was watching TV in her living room when an intruder pushed open her front door. Immediately sensing danger, Binky came out of nowhere and attacked the intruder twice – biting him and tearing up the man’s hand and arm. From Binky’s brave attack, police arrived at the scene and arrested the wanted intruder.

Cynthia has an interesting outlook on why she believed Binky protected her, and that is because she treated Binky like a normal cat and didn’t make him mean. Because of this, he naturally became loyal to her.

There’s also the heroic story of the Australian cat, Mannie. He only has one eye, but after spotting a home intruder, he immediately alerted his owner by loudly meowing. After realizing that this was unusual for his sweet-natured cat, Mannie’s owner, Andrew, found a stranger in his dining room. The intruder was later apprehended after Andrew spotted his license plate.

Paying attention to your cat’s body language and behavior can help you determine when something isn’t quite right.

A little while ago, it was widely reported how Jeremy Triantafilo, a four-year-old boy from Bakersfield, California, was playing in his front yard when a neighbor’s dog bit him and pulled him off his bicycle.

Before anyone else had a chance to act, his cat, Tara, ran over and body-slammed the dog, scaring it off and chasing it away. Once Tara knew the dog was out of the way, she came back to check on Jeremy, who escaped with minor injuries. As a result, Tara received the Cat Fanciers’ Association’s Cat Hero Award – the first-ever award of its kind.

Tara’s family describes her as mild-mannered and mellow. While out of character, this episode highlights just how loyal cats can be – parking their personalities and displaying their defensive nature instead to protect their human owners. This is even more impressive when you consider that a cat’s territorial aggression is usually directed towards other cats. When a cat goes after a dog, there is usually a good reason.

Do Cats Protect You Spiritually?

It’s widely accepted that cats have a sixth sense. A cat’s eyes are windows enabling us to see into another world. And think about this: have you ever seen your cat stare into an empty space or become fixated on something that you couldn’t see? This can be unnerving, but it can be a sign that your cat is looking out for unseen dangers.

Spiritualists believe that cats can sense evil spirits or manifestations that have the potential to put you or your family in harm’s way. This is because cats are born with an astral force, which is thought to be a repellent to negative energy, including evil spirits.

Many people believe that cats can frighten away mean spirits. They trap the aura using their energy field and drive the negative energy from the house. If you notice your cat wandering around without obvious cause, it’s best not to distract it as you may interrupt the process.

On a deeper, personal level, cats can also absorb our negative energies. If you’re feeling sad or down, your cat will sense this and absorb your troubles, leaving you feeling happier and more hopeful.

Of course, none of these theories have been tested in the scientific world, so they should be taken with caution. But cats are mysterious creatures that many scientists have struggled to research fully, so it’s more than possible that cats have a deeper connection to the spiritual world than we can understand.

Why Does My Cat Guard Me?

Cats get attached to humans. Research shows that they have discovered that cats form emotional attachments to their owners. This is known as “secure attachment,” which describes when a cat feels calm, safe, and secure in the presence of its human owner.

There are also benefits for a cat to protect its owner. In return for their companionship, they get a warm, secure home, regular food, a comfy place to sleep, and affection when they want it.

However, it’s easy to confuse your cat wanting to be around you with them guarding you. If your cat follows you around the house, stands outside the bathroom door, or meows when you’re out of sight, it could have separation anxiety.

Separation anxiety occurs when your cat struggles to be away from you for prolonged periods. It might have a nervous disposition and seeks comfort from your presence. If you have a rescue cat, it may have had a troubled past and feels safe around you. And there are many more reasons for separation anxiety.

Why Do Cats Protect Babies?

When a new baby joins the family, cats will react in different ways. Some cats become jealous, while others will hide away from the new addition. However, there are instances when a cat may become protective of its infant friend.

Cats are intelligent creatures and have been known to raise the alarm when a baby appears suddenly unwell. There have even been reports of cats keeping abandoned babies warm in the cold by wrapping themselves around their delicate bodies.

Some felines have a strong maternal instinct or use sounds to communicate. A baby’s cry can sound similar to a kitten’s distress cries, so your cat may associate the two. Its instinct may kick in, leading her to protect the baby by sitting with the child, licking it, or remaining nearby.

Allowing your cat to sniff and gently touch your baby under strict supervision is a good way to sow the seeds of friendship between your child and cat, letting the latter know that it has nothing to fear.

Male and female cats share a strong bond with women because they tend to interact with their cats more than men do, a study by Kurt Kotrschal found. When women meet cats for the first time, they tend to vocalize more than men, which is why cats are especially drawn to females.

The same study also found that cats approach female owners more frequently, initiating contact – like jumping on laps – more often than they would with a male owner. The study concluded that female owners form more intense relationships with their cats.

Interestingly, cats remember acts of kindness and return the favor later on. A kind of ‘negotiation contract’ is developed during the bonding process between a cat and its owner. If the human treats its cat well, the cat will offer some benefit later. Our examples of how cats have protected their owners from harm could be connected to protection from dangers.

So, while cats prefer and naturally tend to be more protective of a female owner, it doesn’t appear that this sense of loyalty is specific to a male or female cat. As publicized in Research Gate, genetic differences and early interactions between cats, particularly when the cat is between 3-7 weeks old, will determine how it acts around you.