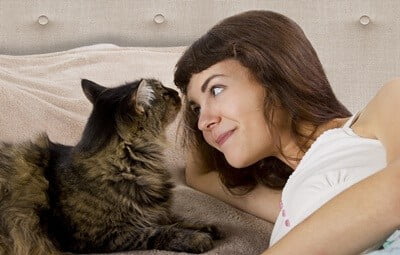 Cats have the capacity to develop strong bonds of attachment with their owners. They imprint on their owners quite easily and can attune to their owners’ mood changes and feelings. So, it’s no surprise that many people believe cats can tell when their owner is sick. Of course, you may wonder if this is true.

Cats have a heightened sense of smell, which enables them to detect illness in humans as a byproduct of picking up on hormonal changes. Furthermore, cats can understand body cues and facial expressions. Any expressions of pain, such as wincing or a grimace, will not go unnoticed by your cat.

Anecdotal evidence shows cats save lives by picking up on illnesses their human owners were oblivious to. Often, cats respond to a sick individual by becoming more clingy and attentive. If you notice any unusual behavioral changes in your cat, it may be picking up on a health problem that you’re not aware of yet.

Do Cats Sense If You Are Sick?

Depending on how sick you are, a cat may be able to detect when you’re ill. This is due to cats’ sense of smell. They can sense sickness in humans by picking up on chemical and hormonal changes within the body.

According to Applied Animal Behaviour Science, the ability of cats to detect chemical changes in their environment plays a role in stress reduction. Cats feel secure around familiar scents and are intrigued by odors they don’t recognize.

When someone is ill, the smell of that person (or cat) changes due to hormonal fluctuations. A cat will be able to detect the different scents and recognize that something is off.

Cats use this to detect illness in humans and other animals alike. Part of why cats rub against each other as a greeting is to determine each other’s health. In feral colonies, this is speculated to allow cats to avoid carriers of diseases.

Outside of using their olfactory senses, cats also use behavioral changes to tell when a person or animal is sick. That’s particularly relevant with human owners.

Consider how closely cats observe the behaviors of their owners. With that in mind, they are likely to notice any psychological and behavioral changes caused by illness.

This suggests that felines can tell when someone close to them is unwell, no matter the form that illness takes.

Do Cats Sense Depression and Anxiety?

Cats aren’t considered to be as attuned to human emotions as dogs. However, they’re certainly able to pick on basic emotional cues through body language and facial expressions.

In other words, when you smile, your cat associates this with positive feelings and vice versa. Your cat can likely detect your low moods through your behavior.

A defining characteristic of depression is that it saps a person’s energy, productivity, and social nature. It impacts their interactions with other people and even their own pets.

If you’re struggling with depression, this will be reflected in how you interact with your cat. It will not go unnoticed. No matter how hard you try to mask how you feel, your real state of being will be apparent to your cat in your lack of enthusiasm and increased lethargy.

Most felines will respond to their owners’ depression by becoming more sympathetic. Unfortunately, this may cause them to mimic your behavior and become withdrawn and depressed. This is not ideal for your cat’s well-being since it may experience appetite loss and a weakened immune system.

It’s important to provide your cat with a diet and stimulation that can help it feel better until you do as well. If necessary, request another family member to care for your cat as you recover from depression.

Cats have an acute sense of smell. They can pick up on scents caused by chemical changes in the body. Mental illnesses tend to cause (or be caused by) hormonal imbalances. Your cat is likely to detect a different scent from you.

Cats can make deductions about your state of well-being by observing changes in your mood and behavior. So, if you suddenly become withdrawn and irritable due to mental illness, your feline will notice this in your interactions with it.

Can Cats Sense When You Are in Pain?

Cats can detect pain in their owners perhaps better than any other affliction. Cats are highly attuned to the moods of their owners. They’re attentive to physical and psychological cues.

They can read facial expressions, such as wincing and grimacing, and accurately deduce that you are in pain.

Can Cats Sense Death in Humans?

When an ailing person is approaching the end of life, the body will undergo several changes that are apparent to a cat.

For instance, the hormonal and chemical changes in the body will be detected by a cat’s olfactory receptors. Cats that live in retirement homes and similar environments tend to be more familiar with the “scent of death.”

As morbid as it may sound, cats do this because they understand what comes next. They’re simply trying to comfort their favored human.

However, just because your cat is extra clingy and affectionate toward you, that doesn’t mean you’re about to die. Cats often express this sympathy when you are ill, feeling unwell, or are experiencing troubling emotions.

Cats don’t have X-ray vision to see through physical objects. However, they can sense broken bones by observing their owners’ physical and behavioral changes.

For example, you may have a cast applied on your arm and make facial expressions that signal pain. As a result, your cat may recognize that you’re suffering from an injury to your arm.

Similarly, a cat might draw conclusions if you use crutches to walk or struggle with mobility due to a broken leg. It’ll know there’s something wrong with your leg.

High blood pressure is usually characterized by an array of medical and behavioral symptoms that cats can recognize.

Patients with hypertension are often erratic and irritable. This isn’t hard for a cat not to notice, especially if it has a close relationship with the individual.

Similarly, high blood pressure often causes an increase in one’s heart rate. So, if you tend to be affectionate toward your cat, it’ll notice this unusual heartbeat when lying on your stomach or chest.

Can My Cat Tell If I Have Cancer?

It’s not entirely clear whether cats can detect cancer with their nose. However, anecdotal (not scientific) evidence suggests that they may be able to do so.

There are accounts of cats sniffing out a body part where cancer was later found. According to the Annals of Internal Medicine, it’s been revealed that cancer might have a smell that cats can detect.

Cancer increases organic compounds known as polyamines in the body. These chemical compounds have a pungent scent that cats can more easily recognize.

Cats can likely sense brain tumors. Like other cancers, brain tumors usually increase the amount of polyamines, whose scent is possibly detected by cats’ olfactory receptors.

Although a cat will not understand the concept of a heart attack, it may recognize early signs of an impending heart attack. This will be based on an individual’s physical and psychological symptoms.

Shortness of breath, for instance, is likely to capture a cat’s attention. Likewise, alterations in body temperature when experiencing a heart attack will be easily detected by a cat.

As highlighted, cats tend to be attuned to the facial expressions of their owners. This means they can pick up on a possible heart attack by observing the patient’s facial cues.

A contorted facial expression or grimace would signal a cat that the individual is experiencing pain.

Can Cats Sense Diabetes in Humans?

Like cancer, diabetes is characterized by a distinct, sickly-sweet smell due to excessive glucose.

This is found not only in one’s urine but also in the person’s sweat. Cats don’t find this aroma appealing and may be perturbed by it. You will notice this in your cat’s behavior.

For instance, the cat may sniff you and recoil or flee in disgust. Alternatively, it may start digging at your clothes in an attempt to get to the root of the strange smell.

If you suspect that you may be predisposed to diabetes, you should pay attention to your cat’s behavior. If you notice any behavioral changes, book an appointment with your doctor to conduct blood tests. The chances are that your cat may be picking up on early warning signs of diabetes.

Interestingly, your cat may learn to recognize signs that your blood sugar is low simply by observing your behavior. If you appear tired, weak, and unsteady, your feline will likely notice such signs of illness.

It’s usually characterized by symptoms such as:

Cats are quite adept at picking up on such symptoms of illness through scent and physiological changes. This means your cat will likely recognize that you are ailing if you manifest symptoms of hypoglycemia.

Do Cats Get Clingy When You Are Sick?

Cats are sympathetic towards their owners’ pain and will often express their concern by becoming clingy.

Remember, cats can form affectionate bonds with their owners. As such, a cat will be more attentive towards its owner when the latter is struggling with illness.

Nevertheless, cats’ excessive empathy towards their ailing owners often causes them to mimic their behavior and mood. If you’re feeling withdrawn and lethargic due to illness, your cat might start behaving similarly.