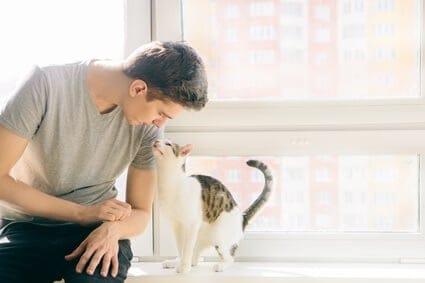 Cats form close bonds with people they deem important to their lives. However, unlike many other domesticated animals, they can’t tell two people apart due to how their vision works.

No, cats can’t recognize human faces because they’re long-sighted. Cats need to hunt and scope out far-away places, so our faces look blurry. Also, cats don’t get close enough to our faces to memorize them. Instead, cats recognize people based on their unique scents and the sound of their voices.

Cats struggle to see human faces in sufficient detail to distinguish between them, but they can still tell us apart in other ways. Interestingly, cats can recognize other cats based on their facial appearance.

According to a study by The Journal of Vision, 12 cats were tested to see if they could recognize their owners. Researchers found that only 54% of the cats studied could determine their owners by their faces alone. In most cases, human faces didn’t register with them at all.

Cats recognized other feline faces almost 85% of the time, suggesting that they remember other cats’ faces more accurately than humans. One reason for this is that cats need to be wary of each other due to negative experiences and to defend their territory.

When cats greet humans, they rub up against us and lift their tails, which is the same way they greet other felines. Also, many cats knead their owners with their paws, which kittens do to their mothers. However, because owners are usually nice or indifferent to cats, they see humans as less of a threat.

Cats can’t recognize human faces well, and there are various reasons why. Human faces look the same to cats as we have similar features, which means cats can’t distinguish between two people.

Vision Research explains that cats can’t decipher color well because they only have 3 cones in their retinas. Even though we have different skin tones and shades, cats can’t tell us apart by our pigmentation.

Cats are long-sighted, which is essential for hunting and overall survival. Wild cats scope out areas from afar to determine whether they’re safe to enter. So, close up, feline vision is blurry.

This means that cats can’t see distinctive features, such as tattoos and facial hair. Not only that, but because cats are significantly lower to the ground than humans, they rarely get close enough to our faces for long enough to memorize them.

Instead, cats rely on their other senses to determine our identity.

Cats are long-sighted, which means they cannot see our facial expressions clearly.

Not only that, but even if they could see our faces, it’s unlikely that they’d understand what our facial expressions mean without other cues, such as human voices and body language.

Interestingly, the journal Animals found that cats can determine facial expressions based on the sounds they hear. Researchers recorded the sounds of a man and a woman laughing and growling before taking pictures of them demonstrating a happy and angry human face.

Ten cats were tested during the study, each one facing a screen while sitting on their owner’s lap. When researchers played the human growling sound, they showed a picture of the angry face and vice versa.

It was discovered that the cats looked at the faces that matched the sounds for much longer, indicating that they recognized the human facial expression that went with the sound.

Therefore, if you accompany animated facial expressions with specific sounds when communicating with your cat, it’ll likely understand them better.

We’ve determined that cats can’t tell humans apart by looking at their faces. However, instead of facial recognition, cats use alternative cues to tell two humans apart.

Cats have powerful noses and ears, so they can distinguish between us in the following ways:

This ability is largely due to their experiences during kittenhood. According to Developmental Psychobiology, acoustic communication plays an integral part in mother-kitten recognition.

Researchers have learned that kittens respond more to the chirps of their mothers than those of stranger cats. These chirps warn kittens of dangers and imminent feeding, so they’re essential for survival.

As soon as the kittens become older and leave their mothers, their owners adopt the role. Your cat will respond to your voice and unique sounds because it trusts you to keep it safe from harm while providing food, water, safety, and shelter.

So, cats mimic their owners’ voices, copying the tones and melody patterns to get their attention. Their speech comes out as a meow rather than words because of their uniquely shaped vocal cords.

However, cats can’t distinguish between humans through their voices in a crowd as the volume will be too distorted for your cat to hear and recognize you.

Scent is vital to the daily life of felines as it’s how they learn more about their environment.

According to VCA Hospitals, cats have 45-80 million scent receptors in their nose, which is 14 times more sensitive than ours.

Even though we can’t smell our pheromones or those of other humans, cats can pick up our skin’s aroma through their powerful noses. These chemicals are like a fingerprint to cats and are how they distinguish between two different people.

Also, cats get used to certain perfumes and shampoos, associating them with your scent. If you change the products you use, your cat will notice and may display strange behaviors, such as:

While these expressions look strange, they’re part of the flehmen response. Cats have a vomeronasal organ called the Jacobson’s organ at the roof of their mouths.

This allows them to taste the air, identify smells we can’t determine, and commit them to memory. Cats will memorize the smells of their owners and use them to tell humans apart.

Cats mark their owners with their scent to claim ownership and provide instant recognition.

This is essential because cats don’t recognize humans by sight and need to learn the sound of their owners’ voices before they trust them.

Cats leave their scents on people by rubbing their heads, faces, or paws on them. That’s because their scent glands are located in their:

By doing this, they leave their scent behind.

When your cat first acknowledges you after an absence, it’ll check you for its familiar scent. Once it picks it up, it’ll determine that you’re not a threat and proceed to interact with you.

If it sniffs an unfamiliar person and can’t identify the scent, it’ll likely walk or run away. Speaking to your cat while it sniffs you will help as it’ll recognize your voice. So, try not to use high-pitched sing-song tones, as this doesn’t accurately represent your unique sound.

Don’t be disheartened by the fact that your cat doesn’t recognize you by your appearance. It still knows who you are due to the sound of your voice and your unique scent.

Through these methods, your cat will be able to form an attachment to you, enabling you to forge a strong and meaningful connection that strangers will never share.