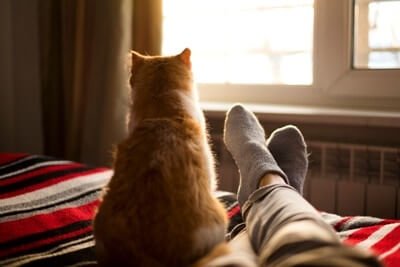 Some cats love their owners’ feet and will sniff, bite, and lick them. As feet aren’t always pleasant, some of us may be disturbed by this obsession. Cats attach themselves to feet because they’re one of the most accessible body parts to show love and affection. The sweat glands in the feet also reveal so much about us and where we’ve been.

Cats have a Jacobson’s organ, which allows them to taste scents and pheromones produced by the feet. They are also comforted by their owner’s smell, which is emitted through the scent glands. Many cats are also prone to attacking their owners’ feet to play or refine their hunting skills. If cats sense unfamiliar smells, they will rub their cheeks against the feet and transfer their scent to claim the territory.

The feet are extremely sensitive, and overzealous cats can cause pain by biting or scratching them. While your cat’s obsession is primarily instinctual, you must set boundaries for your cat.

A pair of human feet has about 250,000 sweat glands, producing half a pint of sweat every day. While humans can’t smell their own scent, cats can identify their owners through the pheromones released through their sweat.

Cats have 200 million scent receptors in their nose, so their sense of smell is much more advanced than ours. An owner’s scent is highly concentrated on the feet. A cat will feel comforted by this and will place itself near to its owner’s feet, where it feels most happy, safe, and relaxed.

Also, bare feet capture scents from the ground, which tell a story about where the owner has been. Cats have a special organ located in the roof of the mouth, called the Jacobson’s organ, to taste the scents and pheromones in the air. This helps cats seek out familiar smells and gives them information about animals and people in the area.

Cats are interested in these unfamiliar smells and will sniff their owners’ feet to find out more about their adventures. Don’t be alarmed if your cat acts displeased about what it can sense as they can be jealous animals and may react aggressively to the scent of another cat or prey creature.

You might also find that your cat sits close to your shoes or gives them a good sniff when you take them off. This is for the same reasons – your shoes contain your scent, especially if you’ve worn them without socks. Pheromones are also contained within the shoes, telling a story about you that your cat is interested in learning about.

Why Does My Cat Lick My Feet?

If you receive a foot licking from your cat, prepare for an uncomfortable experience. A cat’s tongue has backward-facing hooks that act like a comb. It brushes through the coat to keep fur clean while removing dead strands. These are the most common reasons why a cat will lick your feet:

Licking is a sign of affection and isn’t confined to a particular body part. We show our appreciation for cats by petting them. They show their love back to us by licking us. This action stems from kittenhood when their mothers would lick them to groom and show affection.

If your cat is near your feet, that’s where they’ll lick first. It’s also the part of the body that is most accessible to cats, who are down by your feet.

Cats are intuitive and can sense our moods. If they feel that we need cheering up, they will react by licking us to show how much they care. Licking can make humans feel less anxious by releasing feel-good hormones that calm and soothe us. As cats can sense good moods, they can tell when we need a pick-me-up.

A cat uses its tongue to mark its territory and claim its owner as a part of its property. By licking your feet or any other part of your body, your cat is letting all other animals know that you are off-limits. This is because your cat’s saliva carries its scent that other cats can smell.

This can cause problems if you have more than one cat in the household that fights for your attention. You must give both cats the same amount of attention, so neither gets jealous. Separating their food, water, and bed (if they have one) is also an effective way of preventing trouble.

Cats lick their owner’s feet to teach them how to groom themselves. Of course, this isn’t how humans keep themselves clean, but cats see us as big, clumsy cats and assume that this information is useful.

Grooming is a learned memory passed down from mother cats. Your cat recognizes you as part of the family and will lick your feet or other body areas to exhibit those maternal behaviors to nurture you. It’s one of the greatest compliments your cat could give you.

Stressed or anxious cats may react to these feelings by licking their owners excessively. Licking releases endorphins that relieve anxiety and offer relief to stricken cats. However, non-stop licking is recognized as compulsive behavior and is likely to become a habit if not stopped.

If your cat doesn’t stop licking your feet, you will need to determine what is causing your cat’s stress. Changes within the household, illness, or a new, larger cat in the neighborhood are all factors that cause a cat to feel anxious.

You can also get pheromone sprays and diffusers that make your cat feel calm, safe, and relaxed when it’s displaying signs of anxiety. They work by giving off a man-made version of your cat’s pheromones, which only your cat can smell.

Why Does My Cat Rub Its Face on My Feet?

Your cat has scent glands on the sides of its head. These glands contain pheromones that capture your cat’s unique scent. If your cat smells unfamiliar scents from where you’ve been outside with bare feet, it will rewrite them and reclaim its territory by rubbing its face and body against your feet, transferring its unique scent back to you.

However, when a cat rubs its face on your feet, it’s not just a territory-marking exercise. It’s a sign of comfort, too. If your cat loves you and wants you in its pack, it will leave its scent on your feet and other parts of your body as an invitation. Other cats will be able to smell this and accept you as part of the pack, too. A cat’s scent is also designed to last and continues to communicate, even when your cat is elsewhere.

Why Does My Cat Sleep on My Feet?

Your feet are your cat’s comfort zone. Your smell can help a cat feel less stressed and more relaxed. When a cat settles down to sleep, it’s at its most vulnerable. Therefore, placing itself near your feet makes it feel safe and comfortable. However, there are many other reasons why your cat would sleep next to your feet, and it’s more to do with where they are located than the limbs.

The foot of the bed is likely to be closer to the bedroom door, which means your cat can keep a close eye on what’s going on outside the room. It also gives them access to a quick getaway if they need it.

Your cat is also less likely to be disturbed by your feet, as your upper body does most of the tossing and turning at night. If you fidget in your sleep or take a while to get comfortable, your cat will plant itself where it won’t be woken up as easily.

While cats enjoy sleeping next to a warm body, it’s cooled down by your feet, which stops the cat from overheating at night. A human’s body heat is mostly in the middle of the body, so most cats know to avoid this area during bedtime.

Why Do Cats Attack Feet?

When a cat pounces on your feet while you’re lying in bed, it comes as a shock. Most of the time, your cat wants to play, but sometimes it is refining its hunting techniques, and your unfortunate feet are the catch of the day.

Cats attack feet because of their instincts. As described by Cat Health, cats chase things because, as mesopredators, it’s their second nature. Some cats have a strong desire to hunt, and when they see moving feet, their hunting response is triggered, sparking the need for them to attack.

As warned by Vetfolio, kittens are particularly prone to these instincts, especially because humans tend to encourage aggressive play. Because a kitten’s claws are soft and short enough to cause minimal damage, owners encourage them to attack feet out of amusement. But as kittens grow and develop hard, sharp claws, these antics become a problem, and your cat can’t recognize that it’s being naughty.

Cats like human feet are the ideal shape and size for them to catch. Cats are lone predators and stalk small prey animals like birds and mice, so feet make an easy ‘kill.’ And most cats enjoy attacking or biting your feet while you’re sleeping as part of a fun game, especially if you join in by wiggling your toes or hiding feet under the covers.

However, it’s important to consider that your cat could be attacking your feet out of boredom. If your cat lacks stimulation from toys or the outside world, it may use your feet as an outlet to expel energy. Consider offering your cat more opportunities to play.

How to Stop a Cat from Attacking Feet

Though your cat might be playing, they can become overly aggressive, causing painful bites and scratches. When this happens, it’s only natural that you would want to put a stop to it. There are many things you can do to encourage your cat to stay away from your feet, including the following:

Repeating the steps above will teach your cat not to attack your feet. This behavior will stop in time, but you need to be consistent with your approach to prevent it from becoming an ongoing problem.

The next time your cat takes an interest in your feet, remember it’s because your cat is fond of you and wants to find out more. New, unfamiliar smells may make your cat jealous, so don’t be surprised if it suddenly appears more interested in your feet if you’ve been walking around without shoes.

While this is normal, if your cat is territorial and prone to bursts of aggression, it’s a good idea to wash your feet before your cat can have a sniff to remove any scents that may act as a trigger.