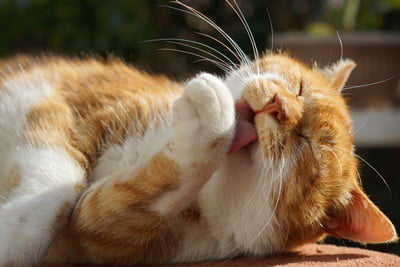 Cat tongues are rough because they’re coated with backward-facing barbs, called papillae or spines. These barbs are made from keratin, which is a structural protein. The papillae on a cat’s tongue are used to tear flesh from the bones of prey and remove dead fur and dirt when grooming their fur.

Don’t be alarmed by the spiky abrasiveness of a cat’s tongue, as the papillae on the tongue aren’t sharp enough to sever or irritate human flesh. It just feels rather unusual when a cat licks you.

As stated, the prickly sensation of a cat’s tongue is due to the presence of papillae. These are small, hollow barbs that cover the tongue. Papillae are essential to a cat’s wellness and are entirely natural.

If a cat’s tongue were looked at under the microscope, it would look hairy due to the presence of papillae. Without these papillae, a cat would struggle to perform everyday activities.

Papillae compensate for a cat’s lack of opposable thumbs. Felines explore the world with their mouths, using their tongues for various purposes. These activities are made easier with the use of papillae.

Here are the reasons why cats have rough tongues:

A cat would struggle to maintain clean and sleek fur without these barbs.

As these barbs face backward, they work against the growth of fur. When your cat licks itself, it’s like brushing its fur. As explained by PNAS, the efficiency of cat papillae is comparable to a comb.

Papillae feel good on a cat’s skin as the sensation of grooming is similar to self-petting. The papillae on the tongue are hollow, meaning that they can hold saliva, distributing it evenly across the fur.

This is important for cleanliness as the cat can use its saliva to wash. Feline saliva is also a natural antiseptic, so if a cat licks its open wounds, the healing time will be reduced.

Saliva distributes oils on a cat’s fur, preventing the hair from growing greasy, clumpy, or matted. If a cat neglects to groom for any period of time, it’ll be clearly visible.

Unfortunately, it’s common for the fur to become trapped on the tongue. The cat cannot spit this out, so it’s usually swallowed, leading to hairballs.

Most cats can pass a hairball without issue. Longhaired breeds may experience larger hairballs, which can lead to intestinal blockages. If this becomes a problem, assist your cat with its grooming.

When saliva reaches a cat’s skin and evaporates, it automatically reduces its temperature.

This can be critical during the hottest months of the year. If it a cat is overheating, it’ll usually groom more. The difference between a cat’s skin and fur can be as much as 30 degrees Fahrenheit.

Given that cats love to sunbathe, grooming becomes increasingly important.

The papillae on a cat’s tongue ensure that no morsels of food are wasted. When the cat scoops wet food into the mouth, it clings to the papillae.

Cats are incapable of chewing from side to side, only moving their teeth in a vertical motion. Many cats eschew chewing altogether, opting to swallow bite-sized morsels of food whole. Papillae hold this food in place until the cat’s ready to chew, minimizing the risk of choking.

Papillae provide a cat with its sense of taste. Felines have comparatively few taste buds – just 473, compared to a human’s 9,000. That’s why cats are indifferent to distinctive tastes, such as sweetness.

Papillae detect the texture and temperature of food. Many cats only eat moist, room-temperature food, which replicates the sensation of devouring wild prey, appealing to feline instinct.

A cat will likely walk away if the papillae detect cold food or an unappealing texture.

As explained by Science, cats use their papillae to defy the laws of physics while drinking.

Cats fold the upper side of their tongue downward. The tongue then darts through water, forcing it to rise to the surface of a bowl. Fluid sticks to the papillae, and the cat closes its mouth before gravity takes hold.

This process unfolds in the blink of an eye. It’s believed that cats perform this action up to 4 times per second, which is part of the reason why cats spend so little time at their water bowls.

The barbs on the tongue are like an organic adhesive, keeping the prey in a cat’s mouth until a killing bite can be delivered.

Also, papillae will scoop up any remains of the prey. For example, loose feathers could be an irritant. The papillae hold feathers in place on the tongue, and the cat can swallow or remove them.

If your cat likes to eat its prey, the papillae play an equally crucial role. Cats’ teeth are strong enough to crunch through bone, but this creates a health risk as they could choke on small bones.

The papillae are like tiny saws, stripping flesh from the bone. This way, the cat can get straight to the meat of its prey. It will systematically tear a small animal apart, swallowing only what’s deemed safe.

Cats have four forms of papillae on their tongue, each serving a different purpose:

Filiform papillae are the most abundant. These point backward, aiding with grooming and the removal of flesh from the bones of prey.

The sandpaper-like sensation of a cat’s lick is due to the filiform papillae.

Fungiform papillae are shaped like mushrooms and found on the side of a cat’s tongue. As per the Sultan Qaboos University Medical Journal, they’re pivotal to a cat’s sense of taste.

These papillae pick out any taste discrepancies in food before swallowing. If a cat spits out food, the circumvallate papillae found the taste unappealing.

They’re used to check the food’s temperature and texture.

Why Don’t Dogs Have Rough Tongues?

While dogs are descended from wolves, they retain comparatively few wild attributes.

The domestication of dogs happened 20,000 to 40,000 years ago, so their evolution has had time to unfold. While wolves retain rough tongues similar to cats, a domesticated dog doesn’t need papillae.

Cats have retained the hunting instincts of their ancestors as the predatory drive of a cat remains high. Without papillae, a cat will have trouble hunting as food remnants will remain on the tongue.

Why Is My Cat’s Tongue Smooth?

Some cats have tongues as smooth as silk. This isn’t due to old age, as the papillae on a cat’s tongue won’t rub away over time.

Rather, this is a genetic mutation. It could occur in any cat, of any breed, from birth. If your cat is born with a smooth tongue, it’ll retain it.

A cat with a smooth tongue will not experience issues with taste, and it’ll be able to drink water without trouble. Where the cat will need support is during grooming.

There’s no need to be concerned by the rough, hairy sensation of a cat’s tongue. These are just papillae, and being licked by a cart won’t cause any damage to human skin.

A cat’s abrasive tongue performs various daily functions, such as removing dead fur and debris and tearing the flesh from the bones of prey.