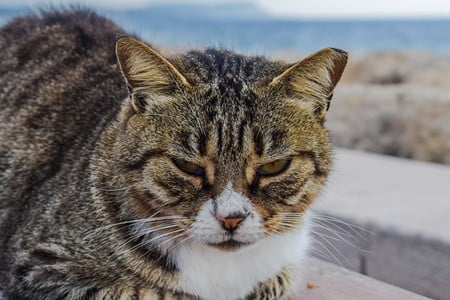 We all make errors of judgment and do things that we genuinely regret, so it’s natural to wonder if cats hold grudges against their owners. The good news is that cats get over one-off events relatively quickly, so the relationship with your cat is unlikely to be permanently harmed.

Cats remember genuine accidents and honest mistakes for up to 16 hours. So, if you unintentionally tread on a cat’s tail and apologize, a cat won’t hold a grudge against you once an apology has been accepted. However, cats remember repeated mistreatment and abuse for the rest of their lives.

It’s not in a cat’s best interests to avoid you over something relatively inconsequential, as it relies on you for its survival. However, certain events can potentially put the cat’s life in danger. These negative occurrences are permanently stored in a cat’s long-term memory to keep them safe from harm.

Do Cats Forgive and Forget?

Many of us mistakenly believe that cats never forgive human mistakes.

Applied Animal Science Behavior tested feline reactions to being restrained against their will at a veterinary surgery. It was found that cats didn’t avoid certain people or areas afterward.

So, a one-off bad experience doesn’t result in a cat holding a grudge.

Survival instincts drive cats, so it’s not surprising that cats have good memories when it comes to physical and mental trauma. Anything that jars these instincts will linger for a long time in a cat’s memory. Consequently, the cat will do whatever it takes to avoid repeat exposure.

This is evident when it comes to fights between two cats, as they remember which neighborhoods have friendly and unfriendly cats. If your cat is attacked on a certain street, it’ll avoid that street as an act of self-preservation.

Is My Cat Mad at Me?

Cats can be easily upset in the short term, especially if you act against their wishes.

Cat behavior can seem random, but cats communicate using distinctive body language. As an owner, you must learn these signs.

The warning signs of an upset cat include the following:

If you observe these behaviors, give your cat some space. Back away and let your cat calm down. Take this time to reflect on why your cat is annoyed with you, avoiding this mistake in the future.

How Did I Upset My Cat?

You are almost certain to upset your cat at one time or another. This is why it’s so important to build a bond because if your cat trusts you, it’ll cool off sooner.

Don’t assume that senior cats will mellow with age. In truth, older cats are easier to anger than younger cats because they have a range of age-related aches and pains, making them ill-tempered.

Common things that annoy cats include:

Perhaps it wasn’t you that’s angered your cat, as cats experience redirected aggression. So, your cat could be frustrated or irritated through no fault of your own.

Apologizing to a Cat

When you want to make amends, wait for the cat to approach you.

The anxiety and nerves of your cat will dominate its outward behavior. Until the cat no longer feels annoyed, it’ll remain angry and on edge.

Ensure that you talk to your cat regularly as cats recognize their owners by voice. Your cat will hear you and respond once it’s ready to forgive you.

When your cat comes to you, react calmly. As Animal Cognition explains, cats respond to human vocal and facial cues. If you scowl or speak in an agitated tone, your cat will respond in kind.

Cat Will Not Forgive Me

You may be repeating an unwanted behavior, leading to a constant cycle of anger. Alternatively, something in your cat’s environment could be causing stress.

Provide a calm and enriching environment, including the following:

Consult an animal behaviorist as your cat may have a chronic anxiety condition.

Cats don’t hold grudges and will quickly forgive and forget one-off incidents. They want to forgive human transgressions as an act of self-preservation, as much as anything else.

Make this easier for your cat by providing a welcoming, comforting environment. A relaxed, confident cat will have little reason to remain angry.

If a cat has been systematically abused, it will be psychologically scarred.

Traumatic events form part of a cat’s long-term memory and stay with the cat forever. The cat will never forget its ordeal but may be prepared to forgive abuse if given enough time.

Cats don’t assume that humans are friendly, so the onus is on the individual to prove that they’re kind and friendly. A cat will have an innate suspicion of humans, and any abuse will magnify this issue.

The cat will avoid its abuser and, unfairly, anybody who reminds it of them. Anything your cat associates with its abuser can trigger negative associations, such as cologne, clothing, and tone of voice.

Rebuilding a relationship with an abused cat involves letting the cat dictate the terms. The cat will be jittery and seemingly afraid of everything. This cannot be fixed by human behavior, so the cat needs to rebuild its confidence as only then will the cat begin acting normally again.

If you treat your cat well and follow a strict routine, it may eventually forgive you. This isn’t a guarantee, as some cats are so traumatized that they cannot look beyond past experiences.

Do Cats Forgive Other Cats?

Cats fight among themselves all the time. As cats are so territorial, conflict is in their nature. Cats can go from friends to mortal enemies and back again, several times per week.

Inter-cat forgiveness depends on how serious the fallout was. Most cats will avoid fighting, displaying a range of warning signs using body language, such as hissing.

Cats are stubborn animals. Walking away in the face of provocation is seen as a sign of weakness as the cat will cede territory and dominant status. As a result, neither cat will want to back down. Eventually, this leads to a physical confrontation.

Both cats will claw and bite, hoping to end the conflict. If one cat is badly hurt, it’ll remember this adverse experience. The cat will avoid the other cat, at least for a while.

Cats with an existing bond are more likely to forgive each other after a fight, s they’ll accept that territorial disputes are part of their life. So, cats can co-exist in the home, despite the occasional conflict.

If two stray cats fight on their first meeting, they won’t become friends. The cats have a negative memory association with each other. However, two domesticated house cats are unlikely to hold grudges.