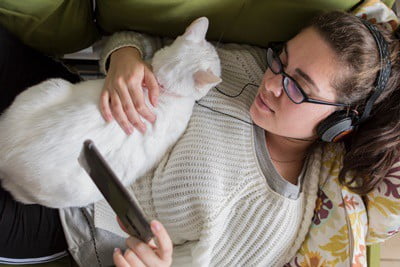 When cats sleep on their owners’ chests, they either curl up in a ball or adopt the loaf position. The latter is more likely when they’re waiting for their owners to wake up. You may be wondering, “why do cats sleep on top of your chest?”

It’s also believed that cats enjoy the sound of their owners’ heartbeat and steady breathing. Similarly, the rhythmic feeling of the chest moving up and down enables them to sleep better.

Table of Contents show
1 Why Do Cats Sleep on Top of Your Chest?
1.1 Rhythmic Heartbeat and Breath
1.2 Comforting Smells
1.3 Territory
1.4 Warmth
1.5 Comfort
1.6 Protection and Safety
1.7 Affection
1.8 Memories of Kittenhood
2 Why Does My Cat Stand on My Chest?
3 Why Does My Cat Sit On My Chest in the Morning?
4 Do Cats Lay On Your Chest To Heal You?
5 Why Do Cats Knead on Your Chest?
5.1 Scent Marking
5.2 Making a Nest
5.3 Going Into Heat

Why Do Cats Sleep on Top of Your Chest?

The reality is that there are several reasons why cats like to rest on human chests. The explanation will depend on your cat’s personality, and how bonded it feels with you, but these are the most likely:

One theory scientists have about why cats enjoy sleeping on their owners’ chests is because they’re drawn to the rhythmic sounds of the human heartbeat and breath.

The steady rise and fall of the chest moving up and down is comforting, helping cats sleep more easily. We’re at our calmest and most relaxed when we’re sleeping, and cats echo these sentiments, taking the opportunity to rest with us.

While we can’t smell our own pheromones, cats can. Cats have 200 million scent receptors, which is far more than we have. We release pheromones through our sweat, which cats detect through their Jacobson’s organ.

This is a special organ located in the roof of the mouth, which allows them to “taste” scents and pheromones produced by their owners. It also gives them information about their environment. Cats that are bonded with their owners feel comforted by this scent, curling up on their chest for comfort.

If your cat’s a territorial animal, it will sit on your chest to “claim” you, particularly if you have other pets in the house. This prevents other animals from doing the same thing and cements the cat’s dominance within the hierarchy.

Similarly, your cat could be trying to transfer its scent onto you. As described by VCA Hospitals, cats have scent glands located on their paws and cheeks. They transfer their unique scent to people and things they see as theirs, claiming them as their own. These scents linger on your skin and clothes, warning other animals away.

Cats have a higher thermoneutral zone than humans at 85 to 100 degrees, which, as Lab Animal describes, is the rate at which cats maintain their temperature without utilizing energy beyond their standard basal metabolic rate. As a result, they love to be warm and seek out sleeping spots that give off the most heat. In this case, that’s us.

In very cold climates, cats may even sleep on your chest while underneath the covers to stay extra warm and cozy. The combination of the insulation from the covers and the warmth we produce may seem too hot, but it rarely is for cats.

Another, more simplistic, reason your cat sleeps on your chest is that it’s comfortable. Cats sleep for around 15 hours a day and settle down in the comfiest positions to get the maximum rest possible. Cats sleep so much to conserve their energy for hunting when it gets dark. If your cat finds you comfortable, it will rest on top of you.

Cats are at their most vulnerable to predators and other dangers when they sleep. Therefore, sleeping as close to you as possible offers protection, keeping them safe from harm.

In the absence of a mother cat, you become the protector, allowing them to sleep in peace while knowing they won’t be harmed. Even though domestic cats don’t need to worry about such dangers, they’re hardwired to think this way.

Despite common misconceptions about cats being aloof, they’re loving pets who crave human affection. Though this may not be true of all felines, those that like being around their owners will sleep on them out of love and adoration.

Similarly, many cats learn that once their owners are asleep, they’re not going anywhere. This means cats get the opportunity to spend as much time as they like with their owners. Cherish this moment, as cats reserve this behavior for those they really love.

Your cat may enjoy sleeping on your chest because it reminds it of snuggling up to its mother. Cats taken away from their mothers too early are especially prone to this behavior, as they become overly attached to their new owners. Unfortunately, your cat may also develop inappropriate behaviors stemming from its experience of kittenhood.

Similarly, owners are more likely to cuddle their kittens close to their chest to keep them warm or offer comfort. If so, your cat may associate these positive associations with your chest, choosing to sleep there well into adulthood.

Why Does My Cat Stand on My Chest?

Cats that stand or walk over their owners are looking for attention. This is most likely to happen when you’re lying down to watch TV or are preoccupied with other things. It’s hard to ignore a cat that walks over you, and if your cat’s learned that this behavior diverts your attention onto them, it’ll continue to stand on you until you give in.

Another reason is that your cat’s busy exploring and you’re in the way. It may also be using you as a climbing frame to get to an insect it’s chasing or new, higher position it wants to check out. These are only a few reasons for exploring, but cats are curious creatures and love getting to know their surroundings.

Scent marking is another likely scenario. We’ve mentioned how sleeping on your chest is a way for cats to transfer their unique scent and claim ownership. Standing on you also achieves this, as they’re able to rub their scent glands over their owners by standing and walking over them.

Why Does My Cat Sit On My Chest in the Morning?

Many cats are food motivated and have set mealtimes they like to stick to. The predictability of a feeding schedule provides security, enabling cats to know precisely when they’re going to eat.

If you’re late waking up, your cat may sit on your chest to encourage you to get up and feed it, especially if you’ve fallen for this behavior before and your cat recognizes it’s the best way to get fed.

Your cat’s also likely bored. If it doesn’t go out to hunt at night and mirrors your sleeping pattern, it probably wants to play and expend some energy. Cats don’t necessarily sleep through the night; they sleep for a few hours at a time before waking up to eat, drink, or stretch their legs. By the time you wake up, your cat’s ready for some company.

Do Cats Lay On Your Chest To Heal You?

Some spiritualists believe that cats are drawn to spinning vortexes of energy – also known as chakras. When cats sit on their owners’ chakras and purr, they’re cleansing them. Of course, this is only anecdotal and a relatively specific belief, but it’s possible that cats can sense their owners’ stress and pain. As a result, they sit with them to comfort them.

On a more scientific note, cats help reduce stress, which is one of the leading triggers of sickness. A cat’s purr also has a healing effect on humans. When cats lay on their owners’ chests, they’re affirming their love and affection, strengthening the bond. While more studies are needed, it’s also believed that the vibrations produced by purring help cats heal and physically rejuvenate themselves after experiencing stress.

Specifically, the frequency of the vibrations is believed to promote bone growth, as they harden due to the pressure. Purrs that reach a frequency of between 25-100Hz correspond to healing frequencies used in human therapeutic medicine, so it’s possible purring has a positive effect on the human body.

Why Do Cats Knead on Your Chest?

Also known as “making biscuits,” kneading is one of the most obvious signs of love and affection. Cats knead on many soft surfaces, including their owners. It’s an instinctual behavior that newborn kittens adopt to stimulate their mothers’ milk production while nursing. Cats also knead because of the following reasons:

Kneading is also a way for cats to activate the scent glands in their paws, so it’s a form of territorial, scent-marking behavior. When they knead your chest, they’re actively claiming you as theirs and safeguarding their belongings from other cats and animals.

Another theory as to why cats knead is because they’re making themselves a comfortable nest. Wild cats paw at leaves, grass, and other debris to make a nest for them and their kittens to sleep.

Kneading softens the nest and enables them to check for predators and dangerous things that are hidden away. If your cat does this to your chest, it’s instinctual behavior passed down from its ancestors.

Unneutered female cats knead when going into heat to alert males that they’re ready to mate. This comes accompanied by other behaviors, such as:

Cats in heat also become overly affectionate, wanting to be around their owners all the time. This is why your cat’s more likely to sleep on your chest during this stage. If this is a new behavior for your cat, you may find it stops once it comes out of heat. If you’re lucky, it may continue.

Cats sleep on your chest for several reasons, and they’re mostly positive. If you’re lucky enough to experience this, embrace it, as your cat loves and trusts you. However, always keep an eye on their behavior in case they display signs of sickness or stress.