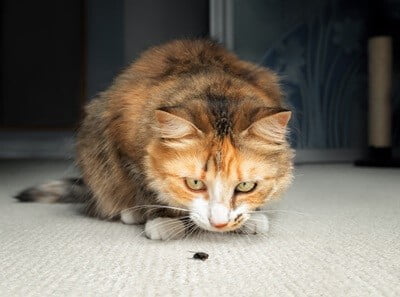 Cats are natural-born hunters that will chase anything that moves. Although this is normally targeted at rodents and birds, some cats also chase after bugs. It’s natural to wonder if you should discourage this behavior or if it’s fine. In truth, it’s usually safe for cats to hunt and eat insects, as long as they’re a safe, non-toxic kind.

Cats can safely eat flies, ants, moths, and other insects. Their digestive acids can even process bees, as well as certain caterpillars. However, bees, ants, and wasps can sting your cat when they feel threatened. Some insects, like cockroaches and beetles, have tough exoskeletons that are hard to swallow and digest.

Similarly, household bugs that have been exposed to insecticides may cause illness. This happens because of secondary poisoning when consumed by a cat. We’ll explore all of the bugs your cat might eat and which to avoid.

Why Do Cats Hunt Bugs?

To protect your cat from harmful insects, it’s important to understand why it eats bugs. Cats usually hunt and consume insects for these reasons:

If a cat is hungry, it may hunt and eat bugs to get the nutrients it lacks. Insects are rich in protein, which is why starving cats will often chase after and kill them for food.

If there is one thing that cats are known for, it is their natural instinct to run after any living thing that moves. These prolific hunters will often catch sight of a bug in their peripheral vision and immediately pursue them.

Most cats are curious and playful by nature. Few things pique the curiosity of felines more than a fluttering bug. When a cat sees the colorful patterns on an insect’s wings or body, it’s likely to chase after it.

Is It Normal for Cats to Eat Insects?

It’s perfectly normal for cats to eat bugs. This is a natural product of their hunting instinct, as they chase insects in the wild. Eating the bugs provides them with fiber and protein, as well as trace vitamins. Although insects are not their main source of food, they’re an acceptable snack.

Even if you provide your cat with a high-quality diet, it may still kill and eat insects inside and outside your home. That’s because it’s not just a means of food, but also a way to play.

It may be gruesome to watch your feline rip apart a cricket or beetle. However, it’s natural and should not cause concern, provided there are no unusual symptoms afterward.

Is It Bad for Cats to Eat Insects?

Most bugs don’t pose any health risk to your cat. That means your pet will not suffer or feel ill if they consume them. Nevertheless, there are some inherent risks in allowing your cat to eat bugs, such as:

Cats that eat insects are at high risk of getting bitten or stung. After all, these are the main ways that bugs defend themselves from their predators. That’s especially true of wasps, hornets, bees, and spiders. This is usually not a problem for cats, though. Their stomachs contain acids that can neutralize any toxicity.

However, during the hunting process, a cornered insect can fight, harming the cat to avoid getting killed and eaten. Bites and stings tend to be minor, and your cat is likely to experience nothing more than mild pain for a couple of days.

According to the Journal of Veterinary Emergency and Critical Care, anaphylaxis does not pose a significant threat to cats. Anaphylaxis refers to a severe reaction when an allergic cat is stung or bitten by an insect.

There is no way of telling in advance whether your cat is allergic to a bug’s stinger. However, several symptoms can help you recognize an allergic reaction. These include:

Even if your cat does not experience an allergic reaction, stings and bites can still have an impact. As such, your cat may still require attention and care, depending on the type of insect that has bitten or stung it. Bee and wasp stings, for instance, can be painful and uncomfortable. Some bugs are venomous, and this is dangerous.

You will need to remove the stinger and neutralize the poison to prevent inflammation. Bites from venomous spiders, on the other hand, often cause serious injuries that lead to infection. You should therefore rush your bitten cat to a vet immediately to have it treated with anti-venom.

Many cats enjoy crunching through the tough exterior of bugs such as beetles, cockroaches, and moths. While this is not harmful, swallowing the tough shells of these insects can cause problems later.

The digestive tracts of cats are not equipped to properly digest the hard exoskeletons of most bugs. As such, your cat might experience a stomach upset after eating one or more insects with a tough shell.

If you notice your cat retching after swallowing a moth or cockroach, take note. This is a sign that its body is rejecting the item and trying to force it out.

The shards of an insect’s exoskeleton may also get lodged in your cat’s throat. This can restrict airflow and cause your cat to choke. If you observe your cat struggling to breathe after eating a bug, pay attention.

This might indicate that pieces of the exoskeleton are trapped in its throat. Consult your vet immediately to get these obstructions removed to allow your cat to breathe normally again.

According to Biomed Research International, insects such as cockroaches carry deadly pathogens in their body. They can transmit these to humans and pets, including cats, through direct contact.

Cockroaches are notorious disease spreaders due to their unsanitary nature. They spend most of their time in filthy areas, such as sewers and drains. Here, they feed mainly on food waste and fecal matter.

While these insects are not affected by the nasty things they eat, the immune system of cats is not as resilient. Therefore, if a cat feeds on them, it may contract illness from exposure to many bacteria. Apart from cockroaches, other insects that could transmit diseases to cats include:

If you suspect that your cat is experiencing secondary poisoning from eating a contaminated insect, take note. You need to seek medical assistance from your vet.

What Insects Are Toxic to Cats?

Some bugs are toxic to cats. These include:

If your cat swallows any of these insects, it may experience gastrointestinal irritation and other adverse symptoms. These include:

Some species, such as black widow spiders, are especially dangerous to cats. They will cause death if consumed. Therefore, if you observe your cat attempting to eat these bugs, consider hiring a pest extermination service to remove them.

What Insects Attach to Cats?

Numerous bugs love to attach to a cat’s skin and feed on it in a parasitic manner. These include:

Not only do they feed on the flesh and blood of your cat through the skin. They also carry diseases that can cause serious health problems to your pet. In light of this, it is critical to take the necessary steps to get rid of these bugs at the first sign.

More importantly, you should apply topical insect repellents to your cat’s fur. This will make it inhospitable for parasitic bugs, thus preventing them from attaching to your pet.

Are Insects Healthy for Cats?

Most insects are rich in proteins, which make them a nutrient-rich food source for cats. However, eating insects can expose your pet cat to numerous risks. These include:

That makes it important to note which bugs your cat is eating. Which are safe and which are harmful? Let’s explore that down below:

Cats do eat cockroaches. They’re one of the most common household pests, so your cat is most likely to run across this insect. Roaches are rich in protein and tasty for cats. However, eating them can put your cat at risk of health issues.

For instance, cockroaches have a tough exoskeleton that a cat’s digestive system is not equipped to handle. Eating these bugs may cause stomach upset, resulting in vomiting out the indigestible body parts.

Likewise, cockroaches are exposed to insecticides, particularly in households where pest extermination is underway. If your cat eats a cockroach that has made contact with insecticides, it may fall sick due to secondary poisoning.

Furthermore, roaches carry many deadly bacteria in their bodies that can spread diseases to your cat. It is therefore critical to get rid of these insects at the first sign of infestation. That will reduce the chances of your cat consuming a poisoned cockroach.

Cats can eat mosquitoes without suffering any negative health consequences. Of course, mosquitoes can carry deadly diseases that are transmittable to humans and pets alike.

However, eating a mosquito is not likely to harm your cat. This is because the digestive acids in your cat’s intestinal tract will neutralize the germs, thus rendering them harmless.

Cats can eat silverfish without experiencing any adverse effects on their health. Silverfish are harmless to cats since they do not sting or emit toxins to ward off predators. Furthermore, silverfish do not harbor any bacteria that may spread diseases to cats.

Your cat may experience negative effects or none at all after eating a caterpillar, depending on the species consumed. Some species of caterpillar possess hairs or spines that can deliver a painful sting. This is a survival mechanism that allows these bugs to protect themselves from predators.

If a cat gets too close or eats such a caterpillar, it may have negative consequences. These include allergic reactions, illness, and even death. It is difficult to tell whether a caterpillar is poisonous at first glance. As such, eating a caterpillar is a bad idea for your cat.

Is It Okay For Cats to Eat Moths?

Moths are harmless for cats since they are not toxic and do not sting. If your feline eats moths, it’s unlikely to experience any health problems. However, if consumed in large amounts, your cat might experience a stomach upset, which might induce diarrhea and vomiting.

Bumblebees are non-poisonous, so your cat shouldn’t have any problem digesting them. When swallowed whole, a bumblebee will be digested just like any other protein. With that said, bumblebees can deliver painful stings that can cause a severe reaction if your cat is allergic.

Dead bees aren’t toxic to cats and cannot cause any digestive problems when consumed. However, dead bees are still capable of stinging since the venom in their stinger remains active even after death.

Eating ants is not only safe but healthy for cats since they’re rich in vitamins and minerals. The only ant species that cats should not eat are fire ants and red ants. Their sting can cause inflammation and dangerous allergic reactions.