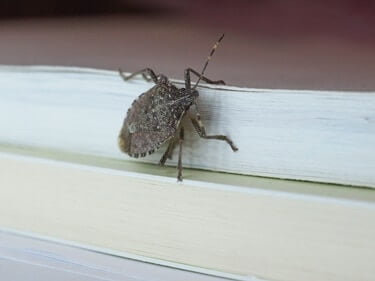 Stink bugs are distinguished by their foul-smelling odor, which is their unique defense against predators. Consequently, some people are concerned that eating a stink bug could poison or harm the cat.

Stink bugs aren’t poisonous to cats, but their secretions can cause vomiting and drooling. Their hard exoskeleton and foul-smelling liquids can cause gastrointestinal tract irritation. This isn’t dangerous, so any discomfort will go away on its own. Stink bugs don’t bite pets or spread diseases.

Insects are part of a cat’s diet, especially feral cats. So, cats with strong hunting instincts can be drawn to eating stink bugs. However, most cats are just interested in catching and playing with stink bugs.

Stink bugs, also known as shield bugs and brown marmorated stink bugs, are home invaders. When they get into the home, cats love nothing more than stalking and chasing them. However, stink bugs have an innovative defense system designed to deter cats and other predators.

As described by the Journal of Chemical Ecology, stink bugs secrete a volatile substance through the holes in their abdomen when they’re disturbed. It smells foul and travels a few inches from a stink bug’s body, preventing cats from killing and eating them.

Some people liken the smell to a skunk, while others describe it as being like coriander. Every stink bug may have a slightly different odor, but the smell is intended to keep cats away. The taste is also unpleasant, so it’s unlikely a cat would want to eat a second stink bug.

Are Stink Bugs Harmful To Cats?

Stink bugs aren’t toxic or dangerous, so they won’t poison your cat if it consumes one.

However, stink bugs can cause gastrointestinal discomfort, especially if they’re eaten in large quantities. If your cat’s prone to catching stink bugs, you may notice the following symptoms:

As the alternative name suggests, shield bugs are well known for their hard exoskeletons.

Even though eating one stink bug won’t kill your cat, it might irritate your cat’s gastrointestinal tract as it moves through the system, causing the cat to vomit and drool excessively.

If your cat eats too many stink bugs, it may experience the following:

The smelly secretions are likely to irritate your cat’s mouth and stomach. Cats will instantly experience the adverse effects of the fluid when it touches their mouth, tongue, and lips.

While some cats will attempt to eat the stink bug, these secretions will likely cause a cat to drop the insect, abandoning the hunt altogether.

A cat’s symptoms should pass on their own within 8-12 hours without medical treatment.

A stink bug’s scutellum, the hard outer shell, is undigestible. If your cat eats a significant number of stink bugs, a bezoar forms in the body. This is a gastrointestinal mass that’s caused by a foreign body.

Some are vomited out but, because the shells are so tough, most get stuck in the stomach, causing a hard, round mass. When the bezoar is too large, it can only be removed via a surgical procedure.

Signs of a bezoar include the following:

Because some stink bug species can spray their chemicals several inches, a cat’s eyes are vulnerable. The secretion won’t cause blindness or vision loss, but it will sting.

Signs that your cat has temporary eye pain include:

If your cat’s eye has been adversely affected by stink bug fluid, wash it with a saline solution and wipe the area with a damp cloth to remove any discharge.

The eye should clear up on its own, but if it doesn’t, take your cat to the vet for antibiotic drops.

Stink bugs are considered agricultural pests because they damage crops and feed off fruits. Consequently, they use pesticides to keep stink bugs away.

Are Cats Allergic To Stink Bugs?

Cats are rarely allergic to stink bugs, but their defense mechanism causes various forms of sickness, which may seem like the cat has a stink bug allergy.

A stink bug’s secretion can even affect a cat’s sinuses if it’s sprayed in the mouth or facial area. An inflamed tongue and sore eyes are also commonly mistaken for an allergy.

Symptoms of an allergy include:

However, it’s more likely that your cat’s experiencing a temporary reaction to the stink bug’s fluid.

Stink bugs don’t bite, which means they can’t pass on diseases or parasites to cats. The absence of a bite also eliminates the risk of abscesses and bacterial infections.

How To Prevent Your Cat From Eating Stink Bugs

It’s difficult to prevent your cat from eating stink bugs if they hunt or roam away from the home.

However, you can prevent stink bugs from getting into the house. An effective method is to place a bowl or pan of soapy water under a light, as this will attract stink bugs, so they fall into the water and drown.

To keep stink bugs out of the house, use the following methods:

Similarly, to distract your cat when it sees a stink bug, do the following:

Once stink bugs are inside your home, don’t touch them with your bare hands as the odor is hard to get rid of and often lingers for days. Shield bugs are slow-moving and easy to catch, so use a plastic bag or wear gloves to scoop them up and put them outdoors.