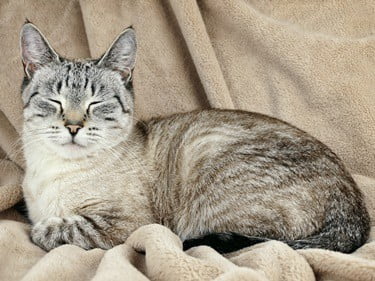 Cats communicate in subtle ways, not limited to their ear and tail positions. Usually, when a cat’s eyes are closed, they’re at their most comfortable, but this isn’t always the case.

Cats shut their eyes when they feel safe, relaxed, and happy. You’ll find your cat shuts one or both eyes when sleeping, grooming, kissed, eating food, being petted, and you look at them. However, closed eyes can signify a medical issue, such as a respiratory problem, infection, or eye damage.

If you want to know the most common reasons cats shut their eyes and make more sense of this feline behavior, our in-depth guide contains everything you need to know.

Why Do Cats Close Their Eyes When Sleeping?

Cats sleep for 12-16 hours, and they fall asleep fast. As cats are crepuscular (most active between dawn and dusk), they sleep during the day to conserve energy in readiness for prowling and hunting.

Cats close their eyes when sleeping because it provides the darkness they need to sleep. Some cats hide under beds to find dark conditions, but cats that enjoy being around their owners will cover their eyes with their legs to benefit from the companionship and safety.

Cats go through two main stages of sleep. The first is rapid eye movement (REM). According to the US National Library of Medicine, rapid-eye movements are accompanied by muscle tone loss, muscle twitches, and wake-like cortical activity.

During this stage of sleep, a cat’s brain mirrors its activity when awake. However, it’s also when cats are most likely to dream. As a result, cats close their eyes during this stage because their muscles are too relaxed to stay open.

The second sleep stage is non-REM (NREM). This is a cat’s deepest stage of sleep, allowing it to repair and rebuild its body after a night of roaming and hunting.

Cats in NREM are vulnerable as this is when predators are most likely to attack. Cats will tuck themselves into a secure hiding spot as finding cover allows them to stay safe and sleep without fear.

Why Do Cats Close Their Eyes When You Pet Them?

Most cats love being petted by their owners as it feels pleasurable and calms them down.

Touching is a bonding tool between cats and their owners. Cats aren’t trusting animals, so owners have to earn their trust. When cats close their eyes while being petted, it’s because they trust you.

Cats prefer to remain on high alert, keeping their eyes open and instincts sharp so that they can flee from danger. When cats shut their eyes, they believe that you pose no risk and mean them no harm.

According to Live Science, cats enjoy the feeling around the base of their ears, under the chin, and around their cheeks, as this is where their sensitive facial glands are located.

When cats enjoy their petting session, they’ll close their eyes and display these signs:

However, cats don’t always enjoy being petted around their stomach, back, and base of their tail.

Signs of distress from petting include:

If you notice any of the above signs, try petting a different spot on your cat’s body.

Why Do Cats Close Their Eyes When They Eat?

When cats eat, they’re in a relaxed state and shut their eyes because they’re enjoying their meal. If food is tastier and more flavorsome, cats are more likely to close their eyes.

Kittens close their eyes to feed off their mother because they haven’t fully opened. After 8-12 days, their eyes begin to open naturally, and they become able to see.

Why Do Cats Close Their Eyes When They Sit?

Cats comfortable in their owners’ presence are happy to relax with their eyes closed as they’re safe.

Also, they’re likely to be in slow-wave sleep (SWS), which is the shallowest form of rest. This stage usually precedes the rapid eye movement stage of sleep, which is a much deeper sleep.

During slow-wave sleep, cats lie with their heads raised and paws tucked in. Sometimes, they’ll sleep sitting up, with their muscles stiffened to keep them upright and rigid.

While cats look like they’re in a deep sleep with their eyes closed, they’re fully aware of what’s going on around them. As a result, you’ll see their ears rotate backward and forward as they home in on any noises they pick up in their environment.

This alertness allows them to pounce or flee whenever the need arises. Cats exhibit this sleep behavior many times during the day, especially when it’s cold and rainy outside, and there’s nothing better to do.

Why Do Cats Close Their Eyes When You Talk To Them?

Many cats exhibit a slow blink when their owners talk to them. Both the squint and slow blink is a form of communication.

Cats can’t understand their owners’ words, but they know that their owners are talking to them, especially when they maintain direct eye contact.

A study by Scientific Reports has found that the eyes are essential in signaling emotions in human-to-cat communications. The narrowing of the eyes is associated with positive emotional responses.

This helps build a strong bond with cats who recognize and repeat this communication technique. While cats aren’t strictly closing their eyes, it looks similar and can be mistaken for tiredness.

Why Do Cats Close Their Eyes When They Groom?

Cats only groom when it’s safe for them to do so. As a result, they don’t need to be on high alert and are comfortable closing their eyes as they clean themselves.

Cats don’t just groom themselves to clean their fur, but they do it to soothe and comfort themselves. Animal experts believe this is in response to threatening or embarrassing situations, and it’s also a form of self-medication that relieves tension.

This means the grooming process feels pleasant, and cats close their eyes as a sign of enjoyment.

Similarly, cats close their eyes when grooming their facial area. This is for practical reasons, as it reduces the risk of their claws scratching their eyes and prevents debris from getting into the eyes as they clean.

However, if your cat closes its eyes as you groom it with a brush or comb, it may be unhappy. Eye-closing is a sign that your cat is trying to get through the uncomfortable process, especially if they’re a long-haired breed with lots of knots and mattes.

Are My Cat’s Eyes Closed Due To A Health Problem?

While cats close their eyes for largely positive reasons, this behavior can signify that something’s wrong. Cats are experts at hiding sickness and illness, which keeps them safe from predators.

Your cat could be closing its eyes for the following medical reasons:

A healthy cat’s eyes should be clear and bright. Discharge or inflammation are obvious signs that your cat has an uncomfortable eye infection.

The following eye conditions can cause cats to keep their eyes shut:

Many animals lose their appetite, leading to weight loss. Sight problems are a likely side effect that affects a cat’s safety and wellbeing when roaming outside.

Injuries caused by scratches or foreign bodies are uncomfortable and painful, making it difficult for your cat to keep its eyes open.

Cats that fight with other cats are most likely to get hurt. However, accidents can happen when cats are outdoors, particularly when climbing trees.

Other symptoms of an eye injury include:

If your cat closes its eyes and sleeps more than usual, it may be lethargic or feel extremely tired. Lethargy is a common indication that something’s wrong with your cat’s health.

It’s difficult to identify the cause of lethargy, but it can be due to a painful injury.

Cats with upper respiratory problems will squint and close their eyes more often because their sinuses are close to the eyes. Consequently, the eyes will become irritated and sore.

Respiratory infections are caused by viruses and bacteria and target the nose, throat, and sinuses.

Symptoms of a respiratory infection include:

Vets treat most infections with a course of antibiotics, but some cats will also need fluids to hydrate them and improve their recovery chances.

Cats are intelligent animals that are capable of communicating a range of complex emotions. So, scrutinizing your cat’s behavior can enable you to determine why your cat’s shutting its eyes.