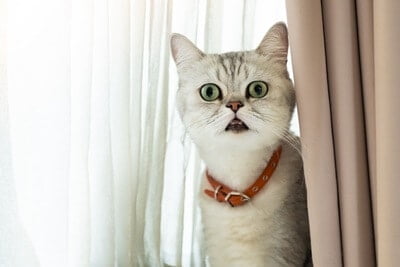 The eyes are among the expressive parts of the feline anatomy. A relaxed cat will close or half-close its eyes. Meanwhile, wide, staring eyes suggest that a cat is wholly alert. A cat that stares directly at you is most likely attempting to send you an important message or has spotted something.

A cat staring at you without blinking can be an act of dominance. Also, it could be a sign that you missed a cue to provide something the cat wants, such as petting or food. Conversely, a cat may be looking over your shoulder because it heard something interesting, such as a bird chirping.

Being stared at constantly by a cat can be a little unsettling for some people. As far as your cat is concerned, it’s just another form of communication. Don’t be unnerved by a cat engaging in this behavior, as its body language will soon reveal a plausible explanation.

What Does It Mean When a Cat Stares At You?

Cats have a third eyelid (nictitating membrane), so they don’t need to blink to lubricate the eyes. This makes narrowing and closing eyes optional for cats.

Many owners find their cats staring at them first thing in the morning because the cat is waiting for you to wake up. Your cat has noticed that your breathing is shallower and realizes that you’re about to awaken, meaning that you’ll be available to provide much-needed food and attention.

Sometimes, staring is a precursor to affection. If your cat stares at you, hold your gaze for a second or two. If the cat slowly blinks, it’s demonstrating love. This is sometimes called a ‘cat kiss.’ Don’t stare back if the cat doesn’t blink because it can be misinterpreted as aggression.

Cats stare because they’re curious about peoples’ actions. Cats see humans as clumsy and noisy, so a cat will watch attentively to understand what will happen next.

Your cat will want to know if you’re about to prepare food. The hungrier a cat is, the more attentive it’ll be to your movements/actions.

If you move toward the kitchen or a known food source, you should expect to be followed, most likely with the cat rubbing against your legs.

Consider how your cat behaved before the staring began. Did it rub itself against you, jump onto your lap, or verbalize?

If so, the cat was communicating with you. It thinks that you’re ignoring its cues and wants you to respond, so it’ll keep staring until you acknowledge its needs by taking action.

Address your cat verbally and see how it reacts. The cat may jump back into your lap, which means that the cat wanted physical attention. If so, offer petting and grooming until your cat starts to purr.

If the cat continues staring, the cat may lead you to an empty food or water bowl. The inference is that you forgot to provide nourishment or hydration.

Alternatively, the cat would like you to clean out its dirty litter tray.

Perhaps your cat is staring past you.

Hearing Research stated that cats have better hearing than most mammals. A sudden noise may have captured your cat’s attention, so you need to identify what has piqued your cat’s interest.

If your cat leads you to a wall and stops, it may have heard rodents or insects inside the structure. Human hearing isn’t good enough to detect infestations like bed bugs and cockroaches inside of walls.

A nervous cat won’t take its eyes away from a source of anxiety. Your cat may be seeking reassurance from you, or your actions may be the reason why your cat’s feeling anxious.

Cats have a strong fight-or-flight reflex. Most anxious cats, especially those that are nervous by nature, prefer to hide in secluded places.

If the cat is standing its ground and staring, it may be preparing to defend itself from a predator.

If your cat is staring at you, it can signify dominance.

If you stare straight into a cat’s eyes, it may be seen as a hostile gesture. Your cat may then become aggressive to assert its alpha status.

Dominance toward humans from felines is uncommon. Only the bravest cat would pick a fight with somebody so much larger than itself but, if this is the cause, it’ll manifest in other bad behaviors.

Perhaps the cat blocks your path when you attempt to enter or leave a room. It’ll refuse to use a cat flap, expecting you to let it in/out. A dominant cat will scratch and claw if not fed or petted on demand.

The vision of cats starts to deteriorate with age.

Consequently, the cat will likely remain still, relying on its hearing and scent to understand the world around it. This may result in abnormal staring behaviors.

If your cat has started bumping into furniture or is reluctant to jump or climb, it may be struggling to see.

A blind cat will keep its nose to the ground while walking. It’ll likely use scent to follow a specific path and may feel its way around using its whiskers.

Staring usually has a behavioral explanation.

However, you still need to be aware of the following health concerns that can lead to staring:

Dysautonomia (Key-Gaskell Syndrome) impacts the automatic nervous system, leading to wide-eyed staring. Not surprisingly, it is sometimes referred to as Dilated Pupil Syndrome.

The Journal of Feline Medicine and Surgery explains that dysautonomia occurs when the autonomic ganglia (clusters of nerve cells) degenerate. However, the eyes are not the only body part impacted.

The digestive tract will suffer, leading to constipation, inappetence, and dehydration. Also, vomiting and diarrhea have been linked to dysautonomia. Most cats develop dysautonomia as kittens.

This is one of the warning signs that your cat has consumed something unsafe. Also, labored breathing, vomiting, diarrhea, and discolored gums are common.

Intravenous fluids will be required to flush out any toxins. If the toxin is solid, surgery may be needed to remove it. If action is taken early enough, most cats will recover from the ingestion of toxins.

A symptom of hypertension is staring eyes that don’t constrict in light.

It’s common among older cats that are overweight. A cat with systolic blood pressure above 160mm Hg will be diagnosed with high blood pressure.

Staring into space, seemingly for hours on end, is a common warning of feline cognitive dysfunction. Other signs include a reversed sleep-wake cycle, clinginess, and behavioral problems.