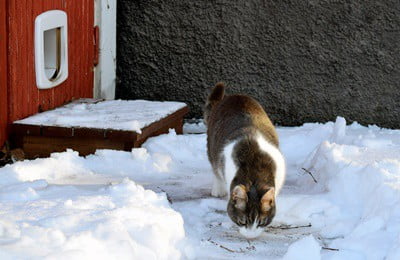 Cat flaps make life easier for everyone, but some cats are reluctant to use them. You may find that your new cat is baffled by this exit point in the door, and even experienced cats may suddenly refuse to use a cat flap. Others will leave through the flap without problem but cry for you to let them back inside.

Cats avoid cat flaps due to confusion, assuming it’ll be dangerous on the other side or that the flap will be too heavy to push open. Other cats dislike the sound of the locking mechanism or plastic flaps. If your cat was locked out or attacked after using a cat flap, it may have been traumatized.

If you’re wondering, “how do I get my cat to go through the cat flap?” the usual fix is to show your cat how the exit works. Hold up the flap, toss a treat through, and encourage your cat to follow. You may also need to wrap it in insulation to dampen any noise or remove magnets to make the flap lightweight.

Why Won’t My Cat Go Through The Cat Flap?

When a cat refuses to use its cat flap, it’s not just being unreasonable. It’s usually caused by issues with the flap, something in the nearby area, or general confusion.

Flap Is The Problem

If your pet doesn’t want to use the cat flap, the problem may be with the exit point itself.

Here are factors you can check to resolve the issue:

Cat Too Big For Cat Flap

Your cat may have gained weight, become pregnant, or have wider hips than others in your home. However, it’s also possible that the flap itself is responsible.

Even if the cat can physically squeeze through, the flap may:

When buying a cat flap, the correct dimensions will depend on your cat’s size and weight:

Cat Flap Not At The Right Height

A cat flap can be the right size but positioned too high. Some cats are more sensitive about this than others as they dislike climbing or losing their balance as they exit the door.

Older cats can have arthritis or other joint problems, so jumping up or climbing will be uncomfortable.

How high should a cat flap be? The optimal position is 10-15 centimeters from the floor.

Cat Flap Made of Wrong Material

Cats are picky about the materials with which they interact. Flaps are even more suspect since your cat uses its head to open them, and designs made of stiff or rough materials can be uncomfortable to use.

Most cat flaps use plastic, which is sturdy and inexpensive. However, some cats are allergic to plastic. If your cat is avoiding a plastic flap, as well as other plastic objects, this is a possibility.

There are many other types of cat flaps you can choose from:

Cat Is The Problem

Here are the reasons why your cat refuses to use its flap and what you can do to resolve it:

Cats are predators and prey (mesopredators) and tend to be skeptical of new objects. If your cat doesn’t use its flap, this may be due to fear.

To reduce your cat’s anxiety, consider using transparent cat flaps. These are made out of see-through plexiglass or safety glass, enabling your cat to do the following:

If you don’t want to get an entirely new cat flap, you can train the cat with fabric. It’s slowly lowered to cover an open cat flap, so the cat gets used to passing through the blind. Here’s how:

A rescue cat could have had a negative experience when using cat flaps, resulting in the following:

A cat that tried to use a locked cat flap may have grown frustrated and decided to never use it again. If the cat was attacked outdoors after using a cat flap, it might associate the flap with bad experiences.

You can train the cat to understand and trust the exit again, which will involve the following:

However, trauma can be difficult to reverse as a scared cat may take far longer to respond to training.

Here are some causes to explore and solutions you can apply:

The cat may be puzzled by how the flap works, which is often the case with cats that have never used a flap before. While it’s common, it’s also easy to resolve.

You need only show your cat how the flap operates:

This will teach the cat that it’s merely an exit, not a barrier. After this, stand back and let your cat explore the flap. When it does, give it positive reinforcement through petting and treats.

While some owners recommend physically pushing a cat through the flap, this is unwise. The cat may resist you, bump its head, or start fighting back, resulting in a bad experience for the cat.

Flap Is Too Heavy

If the flap is too heavy, your cat will avoid using it. After all, it’s either painful, a hassle, or the cat thinks it’s a genuine wall. Small cats, older cats, or more anxious cats will:

Sometimes, cats don’t understand that they need to push harder. Frustrated, they refuse to use the flap at all.

Watch your cat try the exit at first, and adjust the flap if it’s having this problem. Those with magnets often have too much resistance for cats to push through, but you can remove the magnets and put them back once your cat is comfortable.

Cat Flap Is Too Noisy

The sound of the flap opening and closing may be irritating to a cat’s sensitive ears.

According to Hearing Research, domestic cats have a hearing range from 48 Hz to 85 kHz, which gives cats one of the broadest hearing ranges of all mammals.

With this sensitive hearing, your cat may be:

To ensure the flap isn’t too loud, wrap it with cling film. This will remove or lessen the sound and allow it to open smoothly. When your cat notices the dampened sound, it’s more likely to accept the exit.

To use cling film:

Cat Flap Has A Lock

Cat flaps that have locking mechanisms are notoriously loud. They make a clicking noise when they lock, and the mechanisms often clack together when the flap opens or closes.

This can be upsetting to an already anxious cat as the snapping sound can ward off cats that are newly investigating the flap. You can muffle the lock with insulation to fix this, and here’s how:

If your cat flap’s locking mechanism uses magnets, remove them as this will eliminate the clicking noise that locking and unlocking produces. Once your cat has grown familiar with the flap, you can return the magnets.

Cat Will Go Out Cat Flap But Not In

What if your cat will only use the flap one way? This is a common (although confusing) habit for cats new to the flap experience. Here are some causes and solutions to explore:

Flap Is Too High On Other Side

It may be that the outside surface is not level with the inside surface. So, while your flap is the right height from indoors, it may still be hard to reach from outdoors.

Although cats can jump or climb the difference, they can be picky. Squeezing through an uncomfortable flap that’s the wrong height may be avoided if the cat has other things to do.

Cat Is Asking You To Open The Flap

Perhaps the cat goes out but cries for you to let it back in. Likewise, it may only go both ways if you physically hold the flap open for it.

In this case, your cat is likely manipulating you. If your cat learns that you will open the flap when asked, it’ll take advantage, so ignore your cat’s requests.

Some cats don’t realize that what they’ve learned on one side of the cat flap applies to the other. You can:

With training, your cat will learn how to use the flap from both sides.

In these cases, you should:

Your cat should warm up to the flap once they’re gone. If those factors are ruled out, it may have had a bad experience and is now associating it with the flap.

Here are some examples:

To resolve this, limit any stimuli around the flap. You can train the other pets to stop antagonizing each other around the cat flap. If need be, adding a second flap nearby can give your cat options.

If your cat is anxious, you’ll need to calm it down. According to the International Safety of Feline Medicine, calming sprays work as a natural solution to aggressive or easily frightened cats.

How Long Does It Take For A Cat To Use A Cat Flap?

A juvenile cat may take 2-3 days to pick up the habit, while an adult cat without experience should take only a day. If the cat has a bad experience with flaps, it may take 1-2 weeks or more.

You should expect the process to take double the normal time for heavier cat flaps. Cats will be wary of pushing their faces against what appears to be an unmovable object.

Even if they see you open the flap, they might assume that an owner will always be necessary to remove the barrier. Starting with a lighter flap and working up can help mitigate this wait time.

Tempting your cat with food, toys, and treats will lure the cat through the exit. Once it realizes that it was a safe and rewarding experience, it’ll take the opportunity to secure freedom by itself.

Can You Have A Cat Without A Cat Flap?

Some cats aren’t allowed outside for their own safety, so a cat flap is irrelevant. However, if you want your cat to go in and outside, a flap saves you the trouble of physically letting them out.

A cat flap is advisable if you let the cat explore outdoors for most of the day, as this ensures that it can get back into your home for food, water, and shelter.

If you aren’t around to notice and let the cat in yourself, it may get stuck outside for long periods. This can be dangerous in hot weather, heavy rain, or if the cat attempts to escape predators.

No matter the reason for your cat’s aversion to cat flaps, never force your cat through a flap. Given the right type of flap and encouragement, most cats will adjust.