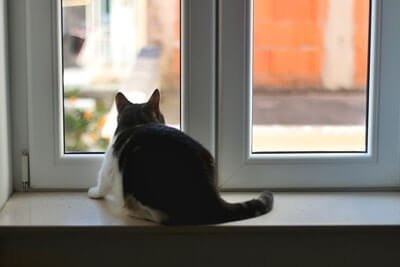 Keeping an indoor vs. outdoor cat is a debate that has raged for years. For some owners, keeping a cat indoors permanently is considered cruel as it takes away a cat’s freedom. For others, it’s an act of love. While every situation is unique, indoor cats will have a longer life expectancy because they’ll be safer.

Indoor cats are protected from road traffic accidents, getting lost, pregnancy, bites, diseases, toxic substances, aggressive animals, and people with bad intentions. Also, it prevents cats from hunting and killing birds and rodents. However, keeping cats inside leads to boredom and territoriality.

Decide whether your cat should remain indoors or be free to roam, factoring in your cat’s age, temperament, health, and life experience into the decision. Understanding the advantages and disadvantages of keeping cats inside will be crucial for reaching the right decision.

Should Cats be Kept Inside?

Humans have debated whether cats should remain indoors since domestication. It’s undeniable that there are pros and cons, but it’s not cruel to keep a cat inside if you provide entertainment and attention.

Whether a cat should remain indoors depends on these factors:

What matters most is that you’re consistent. If you want an indoor cat, keep them home at all times; if you let your cat roam, stand by this decision unless it’s medically inadvisable.

The average life expectancy of domesticated cats is 15-20 years. The more time a cat spends outside, the shorter its average lifespan will be, which is why feral cats live for an average of just 3 years.

Indoor cats are pampered pets, with their every need met. A well-cared-for indoor cat will be provided with abundant food, warmth, protection, and stimulation. Outdoors cats have none of these advantages.

There’s a big difference between cats roaming outdoors for a few hours and being feral. However, some of the dangers experienced by stray and feral cats remain, not limited to traffic accidents, contagious sickness, toxicity, and humans with ill-intent.

There are no guarantees concerning a cat’s lifespan. Even the most pampered indoor cat’s life can end in tragedy, such as illness. Outdoor cats, meanwhile, can become grizzled veterans, learning how to survive.

Advantages and Disadvantages of an Indoor Cat

There are more pros than cons, but there is no one-size-fits-all solution to feline care.

Each cat’s unique, so we need to consider factors that may only apply to your cat. Also, some parts of the country are more hazardous than others.

Benefits of Keeping Your Cat Indoors

Keeping cats indoors can enable owners to avoid a range of problems, including the following:

Cat will Not Go Missing

A cat that stays inside cannot run away and get lost.

Cats are experts at hiding but can be found and tempted out. This is preferable to attempting to track down a lost cat in the vast expanse of land that’s outdoors and fearing the worst for days.

Animals stated that 15% of cats get lost and are never recovered within 5 years of adoption. A cat may have lost its bearings and found itself stray.

Keeping a cat indoors at all times removes this risk. If your cat doesn’t venture outside, it won’t find itself disoriented and disconnected.

So, many owners sleep better at night knowing their cat is safely at home.

Road traffic accidents are the main danger to roaming cats as they lack basic road sense. Many cats are struck by vehicles while crossing roads, leading to serious injury or death.

Senior cats are less likely to be involved in road traffic accidents. As per Veterinary Record, the likelihood decreases by 16% for every year of a cat’s age, suggesting that older cats understand the danger of traffic and moderate their behavior.

However, older cats have diminished sight and hearing, so a senior cat may not detect a vehicle approaching until it is too late. Equally, older cats can have stiff legs, reducing mobility and reaction time.

The less your cat interacts with other animals, the less likely it will grow sick.

Also, we need to consider a cat’s combative by nature. If conflict turns physical, bites and scratches are inevitable, leading to skin wounds and bacterial infections of the blood, such as sepsis.

Cats are governed by their survival instincts, but they don’t always make the right decisions. A cat left unsupervised may inadvertently poison itself, and you won’t be there to save the cat’s life.

This will usually be due to consuming something toxic, such as licking oil from under a car. The cat may consume dangerous human food, such as onions, chocolate, or alcohol.

Stings and bites from insects and spiders, such as brown recluse spiders, mosquitoes, and ticks, can be deadly. Also, some cats are allergic to bee or wasp stings.

If your cat stays inside, it won’t encounter other animals. So, your cat is less likely to get infested with parasites, such as fleas. However, fleas can still find their way into your home.

Also, indoor cats are less likely to get worms. Often, threadworm infestations stem from water or soil that contains eggs. Outdoor cats may eat or drink from unclean water sources and become infested.

If your cat’s female and unspayed, pregnancy remains a possibility. Cats don’t experience menopause, so they’ll be fertile for their entire life and continue to enter estrus cycles.

Once a cat is in heat, its instinct will take over. The female wants to mate, and any intact male will be willing to oblige. Unless you’re prepared for a litter of kittens, keep your cat indoors.

The same applies to unfixed males, as they can impregnate unspayed female cats. This could be a local cat with owners who cannot cope with kittens or a stray or feral cat, adding to overpopulation.

Protection of Birds and Wildlife

Keeping a cat indoors protects the cat and prevents local birds and rodents from being hunted.

Eating rodents can be dangerous for cats. Also, the hunting of birds is considered a problem. The Journal of Zoology discusses how cats reduced the sparrow population of an English village by 30%.

You can fit your outdoor cat with a belled collar, but this won’t reduce its hunting instinct. It only reduces the chances of a successful hunt, leaving your cat frustrated and cantankerous.

Drawbacks of Keeping Your Cat Indoors

There are disadvantages of keeping a cat indoors, including the following:

The main danger of keeping cats at home is boredom, as cats are natural stimulations seekers.

A feline that cannot discover new scents and territory may quickly grow bored and restless, so you’ll need to deal with this problem in the home.

A lack of stimulation can lead to behavioral issues, such as aggression and destructive behavior. Ensure that your cat can access various rooms, toys and puzzles, and exercise apparatus, such as climbing trees. Also, leave curtains or drapes open as cats love to look out of the window.

Ensure your cat isn’t left alone for too long. While cats enjoy toys, Behavioral Processes stated that many cats prefer human interaction and food. If you cannot tend to your cat, ask a neighbor to visit.

Cats are born hunters, but all felines have different levels of predatory drive. Some will stalk anything that moves, while others are less interested.

If your cat is desperate to hunt, it can become frustrated by its inability to do so. The cat may turn this frustration on you, so you may be scratched, clawed, and hunted playfully.

Hunting games played at least twice a day should satisfy a cat’s instincts. The Journal of Veterinary Behavior confirms that prolonged playtimes reduce the likelihood of unwanted feline behaviors.

Part of the appeal of roaming outside for cats is expanding their territory.

Wild cats can claim terrain as much as two miles away. While a domesticated cat is unlikely to be this ambitious, it’ll start to make increased demands for territory within the home.

This could lead to additional marking behavior, such as urine-marking and scratching carpets.

Cats that live indoors need more care, such as clean litter trays. This keeps your cat healthy, reducing the risk of bacterial UTIs.

If your cat stays inside, it’ll soil its litter several times per day. If you fail to clean a cat’s tray, it’ll start to poop in other parts of the house.

When we spend too much time alone, we become set in our ways and less tolerant. The same applies to cats. If your cat is home all day, it’ll grow used to being alone, which will modify its behavior.

Keeping cats indoors permanently can keep them healthy. The onus falls on you to meet your cat’s needs, but indoor cats with appropriate stimulation can remain happy and healthy.