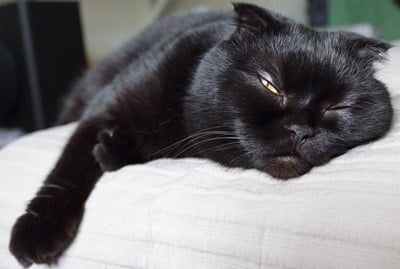 Cats do many strange things, but one of their creepiest behaviors is when cats sleep with their eyes open. Not only is this unsettling, but some owners are concerned that it’s a sign that something’s wrong.

Cats instinctively sleep with their eyes partially open so they can react quickly to danger. This is most likely to happen in slow-wave sleep, not rapid eye movement sleep. Also, some cats don’t shut their eyes during sleep due to eye injuries and nictating membrane (third eyelid) laceration.

It’s normal for cats to keep their eyes open while they sleep as they’re hardwired to be on guard for threats, especially senior cats. However, you should monitor your cat’s eyes for signs of trauma.

Adult cats sleep for an average of 15 hours per day.

When they rest, they sometimes keep their eyes partially or completely open. This is normally during light sleep, but it can occur when sleeping more deeply.

You might see both eyes open or just one eye open. Either way, both instances are normal unless your cat displays signs of sickness or injury.

The main stages of cat sleep include:

While cats are in the slow-wave stage of sleep, their senses are still in tune with their environment. This is important for wild cats, who need to flee from predators and other dangers without delay.

As a result, cats experiencing slow-wave sleep may keep one or both eyes open so that they can react immediately if they hear or see anything that puts their lives in jeopardy.

The rapid eye movement of sleep is a deeper form of sleep when cats are most likely to dream.

Cats lose muscle function during this stage, and their paws and ears twitch. Your cat will seem active because the brain functions the same way as when it’s awake. Sometimes, your cat will look like it’s running in its sleep.

However, while not as common, some owners notice that their cat’s eyes remain open during the REM stage of sleep. Sometimes, the cat’s eyes roll back when sleeping due to the loss of muscle function, and they twitch rapidly.

A cat’s eyes remain open during REM because its muscles are so relaxed. Open eyes are normal, and the cat’s brain and muscles need rest.

Why Do Cats Sleep with Their Eyes Open?

Your cat has ingrained instincts to flee from danger, and that begins by keeping a watchful eye on its environment. This gives cats sufficient time to react and keep themselves safe from harm.

Cats keep their eyes open when resting due to:

If you notice your cat keeping one or both eyes open when it rests, it’s probably not in the deepest stage of sleep. As a result, it can be easily woken by minimal sound or the slightest touch.

These small bursts of sleep enable cats to conserve their energy for when they hunt at night. Cats also react to the weather, so they’re more likely to enter a lighter sleep when it’s cold and wet.

Domesticated cats are less likely to worry about environmental dangers, but they’ll still keep their eyes open when it’s noisy, and a lot is happening around them.

When the house is full of people during the day, cats will tuck themselves away to sleep while keeping at least one eye open. This allows them to keep an eye out for dangers they might need to run away from.

Cats get into fights all the time, especially if they go out at night. If they encounter a territorial cat on their travels, they could easily end up with a scratched eye or eyelid. Consequently, closing the eyes could be painful.

In particular, the third eyelid can become lacerated. As described by Greenside Animal Hospital, this is a common injury seen in active cats involved in fights. Also, scratches can cause cornea ulceration.

Common symptoms of eye trauma include:

These eye injuries can be treated with eye drops, but the eye may need suturing.

Foreign bodies within the eye, such as glass or thorns, can prevent a cat from sleeping with its eyes shut. If the foreign body isn’t removed quickly, it can lead to an infection.

Dry eye in cats is scientifically known as keratoconjunctivitis sicca (KCS). Dry eye occurs when the cornea becomes inflamed, and the surrounding tissue dries out.

It’s caused by the inability to produce adequate amounts of tear duct film, which lubricates the eye and removes dirt and debris. According to VCA Hospitals, common causes of KCS include:

Cats with KCS usually have:

Some cats hold their eyes shut, while others can’t shut them due to the discomfort.

Watching Out For Owners

Cats that have formed an intense bond with their owners sometimes can’t bear to be apart from them and like to know where they are at all times.

According to Current Biology, cats attach themselves to their owners and see them as a form of security.

Researchers discovered that cats that had developed a strong bond with their owners felt less stressed and became more relaxed as soon as the person returned from a brief absence.

This study indicates that some cats keep their eyes open while sleeping to monitor their owners’ movements. If their owner moves into another room, the cat will likely wake up and follow to remain close to them.

Hungry cats sleep little and often to conserve energy. If they know that food is nearby, or it’s nearly dinnertime, they’ll become more alert – even as they sleep – to ready themselves for a meal.

Similarly, greedy or opportunistic cats keep their eyes open to react as soon as their owner goes into the kitchen or area where food is stored. Here, they’ll follow in the attempt to get treats or extra food.

Why Do Cats Have A Third Eyelid?

When cats sleep with their eyes open, they expose their third eyelid. The first two eyelids occur on the top and bottom of the eye, meeting in the middle each time a cat closes its eyes.

The third eyelid, also called the nictitating membrane, is located in the eye’s inner corners. The third eyelid acts like a windshield wiper each time a cat blinks, clearing dust, pollen, debris, and other foreign bodies.

When cats are relaxed and go into a deep sleep, their eyes sometimes remain open. Similarly, if the eyes start off closed, they gradually open as the cat’s muscles become more relaxed.

The third eyelid becomes more noticeable during the cat’s resting stages to protect the cornea and moisten the eye.

While it’s normal to see a cat’s third eyelid when it’s sleeping, it can be a sign of an illness when it shows when the cat’s awake and alert.

Symptoms of an illness include:

So, while it may look like cats have their eyes completely open when they sleep, their third eyelid keeps them protected from dirt and debris.