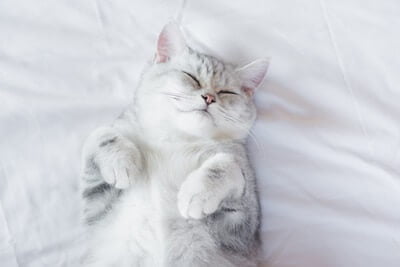 Cats spend up to 75% of their lives sleeping. This gives cats an unfair perception of being lazy animals, but they sleep this much for important reasons. However, what is impressive is cats’ ability to fall asleep so quickly.

Cats sleep this much to conserve their energy in readiness for their nighttime adventures. Every time you turn around, your cat’s asleep. However, more often than not, it’s just resting its eyes to conserve energy. Cats aren’t like humans, and their thoughts don’t cloud their ability to fall asleep when they feel tired.

Table of Contents show
1 How Do Cats Fall Asleep So Quickly?
1.1 Slow-Wave Sleep
1.2 Rapid Eye Movement Sleep
1.3 Non-REM Sleep
1.4 Why Cats Fall Asleep Quickly
2 How Fast Can Cats Fall Asleep?
3 Why Do Cats Sleep So Much?
3.1 Energy Conservation
3.2 Keeping Themselves Cool
3.3 Enjoying Sleep
3.4 Illness
3.5 Lacking Stimulation
4 When Is Too Much Sleep A Problem?

How Do Cats Fall Asleep So Quickly?

Cats enjoy plenty of rest, with most sleeping on average 15 hours a day. Kittens and older cats can sleep for up to 20 hours, as they tire out more quickly than adult cats.

Cats are crepuscular, so they’re most active between dusk and dawn, preferring to hunt when it’s dark. Because you’re less likely to see what your cat is up to at nighttime, it sometimes feels like it sleeps throughout the day.

To understand why cats fall asleep so quickly, it’s useful to fully understand the different sleep cycles of cats.

Slow-wave sleep (SWS) is a shallow form of rest, where a cat’s senses are in tune with what’s going on around it. While it may appear fast asleep, it can hear and sense when anything or anyone is nearby.

Cats in this stage of sleep are dozing but remain alert in case they need to pounce or run away. This stems from their time in the wild when cats needed to escape from predators.

According to Science Direct, there are two forms of slow-wave sleep; light and deep. Cats that are in deep slow-wave sleep move onto the rapid eye movement stage of sleep.

When your cat is in the rapid eye moment (REM) stage of sleep, it’s most likely to dream. As the name suggests, a cat’s eyes will move rapidly, and its paws and ears will twitch. The US National Library of Medicine describes how rapid-eye movements occur in tandem with the loss of muscle tone, muscle twitches, and wake-like cortical activity.

Your cat will seem active, and that’s because its brain activity is the same as when the cat’s awake. However, waking them is difficult during REM sleep. It’s also inadvisable to do so as your cat may become confused, thinking you’re a predator. REM makes up 60% of your cat’s sleeping time and takes place every 90 minutes or so.

In the non-REM stage (NREM) of sleep, cats are unlikely to move much and will become unattuned to what’s around them. This is the deepest form of sleep and is crucial for maintaining a cat’s health. Cats will rebuild and repair their bodies during this time but may also experience muscle tone loss.

Cats in NREM will tuck themselves away to sleep, as they are at their most vulnerable. Kittens need more non-REM rest than adult cats as they build, strengthen, and revitalize their immune systems during this time.

Cats spend most of their life asleep, alternating between a light catnap and a deeper slumber. The main reason cats fall asleep so fast is that they’re in the lightest stage of sleep, which is around 60% of a cat’s total sleeping time.

Each phase lasts for around 15-20 minutes and is used to conserve energy. If you touch your cat while it’s in light sleep, it will stir as it responds to you. Similarly, you’ll see your cat’s ears and paws twitching as it remains alert to the sounds around it.

While it might seem like your cat can fall asleep anytime, anyplace, it’s more accurate to say that your cat is dozing.

There are a cat’s instincts to consider, too. In the wild, cats use an optimal sleeping strategy to catch as much sleep as they can before predators turn up. By taking shorter, quicker naps throughout the day, they enjoy a good amount of rest and avoid predators.

Cats don’t experience as much mental stimuli as humans. While we might toss and turn in bed at night worrying about things going on in our lives, cats don’t have the same sleep barriers. When they are tired, they will sleep.

How Fast Can Cats Fall Asleep?

It’s always amazing how fast cats can fall asleep. One minute they’re awake and alert; the next, their eyes are closed, and they begin to emit sleepy sounds, such as light snoring and heavy breathing.

In the slow-wave sleep stage, cats spend roughly 15-30 minutes dozing. During this time, a cat enjoys some shut-eye while sitting upright with its paws tucked in. Cats go into this stage of sleep quickly and easily, almost as soon as they close their eyes.

After 30 minutes, they move onto the deep sleep stage, which only lasts for about 5 minutes. Cats are harder to awaken during this stage and will adopt a more comfortable sleeping position. They’re less likely to stir or respond to sound and touch.

After 5 minutes, the cat returns to the slow-wave sleeping stage and alternates between the two until it is ready to wake up. The cat will repeat this process as often as it needs to, usually until it goes out at night to hunt.

Why Do Cats Sleep So Much?

You might worry that your cat is sleeping a lot because it is bored, but that’s not the case. Cats are adaptable creatures and change their sleeping patterns to suit their hunting schedule. They also love to be comfortable.

The most common reasons for a cat’s prolonged sleeping cycles are because of the following:

Cats that hunt expel a large amount of energy at night, stalking and hunting their prey. After a night on the prowl, cats need to recuperate their lost energy by sleeping, which prepares them for another evening of hunting.

In the wild, cats hunt to eat, so their predatory instincts are what keep them alive. Domesticated cats have retained this wild streak, even if they’re not successful with catching prey. Hunting requires a lot of energy as cats stalk, climb, run, and pounce as they try to find and kill their prey.

Indoor cats that primarily play with toys also expel the same amount of energy. You’ll find they have short bursts of intense play before falling asleep for an extended period.

In warmer climates and throughout the summer months, cats sleep more often to conserve energy and keep themselves cool. When it’s hot, cats can sleep for up to 8 hours at a time. If a cat expels too much energy when it’s hot, heat-related illnesses can develop, leading to sickness. Check for these symptoms of illness:

Some cats enjoy sleeping and will do so more than others, especially on a cold and windy day when there’s little else to do. Sleeping when you’re tired is a deeply enjoyable experience for us, which also applies to cats.

While cats usually sleep in 15-30 minute stints, cats that need a good snooze will go into a longer, deeper sleep. They’re also less likely to stir or wake up prematurely.

If a cat feels under the weather, it will attempt to sleep the illness off and conserve its energy for when it’s feeling better. Also, sleeping acts as anesthesia and allows the cat to enjoy relief from pain.

An illness usually depletes a cat of its energy. Cats will sleep because they have little left in the tank. However, once your cat starts to feel better and starts eating again, you’ll gradually see it becoming more active and alert. At this point, it won’t need to sleep as much.

If cats are left on their own for long periods of the day without access to the outdoors, toys and puzzles should be left out to provide physical and mental stimulation. Cats might also enjoy having access to the yard via a cat flap.

When Is Too Much Sleep A Problem?

It’s normal for cats to sleep for up to 20 hours a day. After all, cats love to sleep. However, if you notice that all your cat does is sleep, there might be an underlying problem.

Your cat must get looked at if it’s sleeping throughout the night. Cats should be at their most active when it’s dark, and if they show no interest in going out, health issues could be to blame. Boredom, obesity, age, poor diet, feline depression, and a lack of vitamins are other common causes of excessive tiredness.