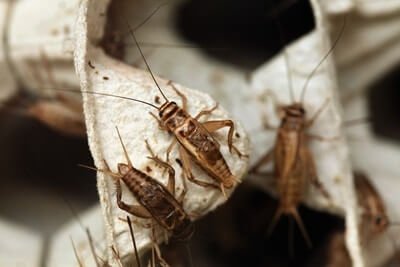 Cats love to hunt moving things. And it’s not just mice and birds on the menu as cats will chase a cricket if they find one. But something most cat owners would want to know is, are crickets toxic to cats if eaten?

Crickets are non-toxic and don’t poison cats. In fact, they’re a good source of protein, iron, vitamin B-12, and omega fatty acids. However, in rare cases, cats can develop oral irritation after eating a cricket. There’s also a chance they could ingest a harmful parasite that causes gastrointestinal problems, but this is rare.

Not all cats eat crickets, but some enjoy the thrill of the hunt. Some cats will eat crickets if they catch hold of one, but not all do. It all depends on your cat’s hunting instincts and how hungry it’s feeling.

In the wild, crickets are more likely to become a staple part of a cat’s diet. This is because they’re high in protein and provide a range of essential nutrients in the absence of small rodents and birds.

In some corners of the world, where there are many grassy areas for cats to hunt in, crickets are abundant. This enables cats to fulfill their nutritional needs until they can find something more suitable to eat.

Cats are more likely to eat crickets out of curiosity. The process of chasing and catching crickets is fun for many, and cats reward themselves by eating the cricket.

However, not all cats eat crickets. Some enjoy the chase and are happy enough to catch the insect. They may let the insect go once caught, or they may kill it and leave it alone.

Are Crickets Good For Cats?

All crickets, including black crickets, camel crickets, and spider crickets, aren’t poisonous to cats. While crickets aren’t a popular food choice, they’re high in a range of nutrients that cats need to remain healthy.

It could also be argued that leaving cats to catch and kill crickets is more sustainable and environmentally friendly than feeding processed cat food, which requires extensive processing. Here are health benefits that crickets provide for cats:

As described by Comparative Biochemistry and Physiology, cats are obligate carnivores that maintain their normal body weight with small meals and adjusting their nutritional intake according to the energy density of foods available.

While a small number of crickets won’t provide the amount of protein a cat needs, they can help sustain felines when their preferred protein sources are unavailable. Crickets are a complete protein source with all 11 essential amino acids for cats. They also contain twice as much protein as ground beef.

Crickets are free from antibiotics, GMOs, and heavy metals. They also have constant access to food and water, meaning that they remain healthy.

Crickets contain over twice as much iron as spinach. So, while cats don’t eat spinach, they often lack the iron levels needed to sustain them, developing deficiencies. Iron is essential for:

Signs of an iron deficiency include:

Cats get the iron they need through their diet, so crickets make a healthy addition.

Crickets are rich in vitamin B12. A report published by Food Chemistry explains that there is 2.88 µg of vitamin B-12 in every 100 g of cricket. This compares to:

Cats can’t produce their own B12, so they rely on their diet to provide it. Most commercial foods are high in B12, but wild cats can increase their levels by eating crickets.

In cats, omega-3 fatty acids promote healthy skin due to their anti-inflammatory properties. They also give cats a healthier, shinier coat by improving the health of the hair follicles. In addition, it can prevent shedding, which, in turn, stops hairballs from forming as quickly.

Omega-3 also improves a cat’s joint function by decreasing inflammation, which is useful for cats with arthritis.

Crickets are high in calcium. Calcium is considered an essential nutrient for cats, so it must feature in your feline’s diet. Cats require 0.6% of their total diet to be calcium, which should also be balanced out with phosphorous.

The primary sources of calcium for cats are bones, dairy, organ tissues, meat, and legume plants. However, crickets can be a useful addition to the diet. Diets lacking in calcium often lead to deficiencies, which can cause kidney failure. Symptoms of a calcium deficiency include:

Without enough calcium in the diet, rickets can develop, causing a cat’s bones to become brittle, soft, and fragile. This means that jumping injuries are more likely to occur.

A cricket’s exoskeleton is made of chitin. This is a good source of prebiotic fiber that helps to keep a cat’s digestive system healthy and working efficiently.

Fiber isn’t usually a natural mineral in protein, but cricket protein is. In the wild, cats eat all parts of their prey, including the fur and bones. These parts are indigestible and act as fiber as they work their way through the body. When cats don’t hunt and eat prey in captivity, they rely on fiber within their everyday diet.

For both wild and domestic cats, crickets can promote good gut health and ensure that hairballs and feces pass through the digestive system, reducing the chance of blockages and constipation. Similarly, fiber helps to prevent diarrhea as it bulks out the feces.

Are Crickets Bad For Cats?

Cats can’t be poisoned from eating a cricket, but they may vomit if they dislike the taste. This is sometimes a natural reaction to eating one.

However, some risks come with eating crickets. They’re uncommon, but if your cat gets sick after eating a cricket, your cat might have one of these problems:

A cricket’s exoskeleton can cause oral irritation after being chewed. The exoskeleton is designed to be hard to protect the insect from predators and act as the cricket’s skeleton as they don’t have a backbone. So, while crunching through the hard shell, cats may cut their mouths on sharp pieces of the exoskeleton.

The cat’s mouth becomes inflamed and sore, preventing the cat from eating. Other symptoms include:

Cats with a sensitive stomach may not take well to eating a cricket. In addition, food intolerances or allergies may make your cat feel sick.  Signs of gastrointestinal upset include:

If your cat becomes unwell 24-48 hours after eating a cricket, the insect likely made your cat unwell.

Internal parasites are unlikely when consuming crickets, especially in small quantities. However, it’s important to understand that some parasites can be found in crickets’ bodies and cause cats harm.

One of them is Physaloptera, otherwise known as the stomach worm. They’re occasionally found in a cat’s stomach and are between 1-4 inches long. According to Vet Stream, outdoor cats that eat crickets, beetles, cockroaches, snakes, frogs, or mice are most likely to ingest stomach worms.

When the parasite is in a cat’s stomach, it attaches to the host’s gastric or duodenal mucosa and lays eggs in around 56 to 83 days. The eggs are exited from the body through a cat’s feces.

While in the body, the parasite feeds off the affected cat’s blood and tissue components. Some worms cause diarrhea, while others cause anemia. It all depends on where the parasite has infected inside the body. Fecal tests can confirm if your cat is sick after eating this parasite.

Ensure your cat is on a regular de-worming program, which will kill any unwanted parasites.

Depending on where crickets live, there’s a chance they could be exposed to pesticides. They may also ingest pesticides through the plants and greens they eat.

As a result, it’s possible that cats could ingest the pesticides that have come into contact with the cricket. Pesticides are lethal to cats, especially in the high doses that farmers use to protect their crops. All cats will display different symptoms after having consumed pesticides, but the most common include:

If you didn’t observe your cat eating a cricket, it could be hard to diagnose. In severe cases, cats could be left with long-term health issues, so don’t leave your cat to get better on its own.

Cats are natural hunters, and their brains are hard-wired to chase anything that’s moving. Even in domestic cats, this predatory behavior still exists.

When cats see things moving, their first instinct is to give chase. However, domestic cats don’t need to hunt to stay alive as they have an abundance of food at home. As a result, they’ve evolved to hunt for sport rather than food.

Crickets also provide a good test for cats, as they’re small and can hide in between grass and shrubs. Cat’s don’t give up easily and spend hours waiting for the opportune moment to catch them.

Cats have also always made useful pest controllers on farms and industrial sites. While rodents, birds, and small rabbits are the most common types of pests, crickets destroy crops, and cats that have been trained for pest control will use their hunting skills to eliminate them.

Do Cats Keep Crickets Away?

Similar to hunting crickets, most cats deal with cricket infestations within the home. They can’t resist the fun game and will kill any cricket they find. However, the difficulty for cats is catching them. Crickets are small and fast and can hide in the smallest corners of the home. So, ensure that your cat doesn’t become too obsessed with catching crickets.

Crickets have two multipurpose jaws that they can bite with. However, their mouths aren’t strong, so they rarely puncture or dig into the skin. Also, cats are protected by their fur.

Locusts, which are a type of cricket, have the potential to penetrate the skin. When they bite, it can sting, and cats can develop a red, itchy sore. Larger crickets usually have more painful bites.

If the mouth does manage to puncture the skin, the cat is at risk of painful sores forming. Also, depending on where the bite is, it can become infected with harmful bacteria. A cricket bite doesn’t transmit any diseases.

Crickets rarely cause any harm and are considered safe for cats to eat. They can even improve a cat’s health due to all the essential nutrients.