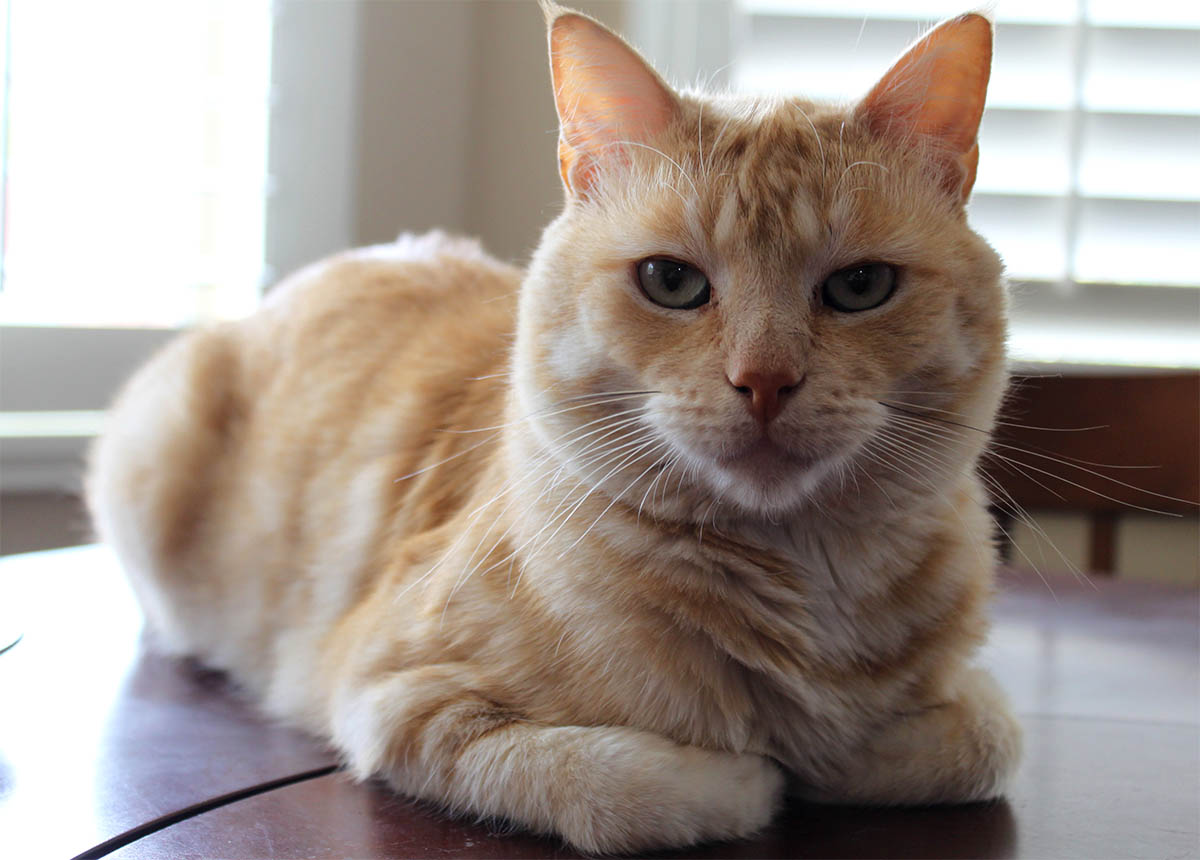 Cats sit in many interesting positions, and the “loaf” is among the most common. Like all cat body language, the cat loaf position has hidden meanings that it’s worth taking the time to understand.

If a cat enters the loaf position, it’s relaxed and secure. It doesn’t feel the need to be on high alert to defend itself or escape threats. Cats loaf to prevent heat loss and maintain their body temperature, so your cat may be cold. Also, your cat may loaf to protect an injured forepaw.

If you notice that your cat is loafing, it’s likely to be feeling happy and contented. However, it’s also important to learn why an unhappy cat might loaf.

What Is Cat Loafing?

A cat loaf involves resting on its belly, tucking its forepaws underneath its chest. In some cases, you can still see the side of each paw.

The reason it’s called ‘loafing’ is your cat’s body shape. With its paws folded underneath its body, it takes on a rectangular shape like a loaf of bread.

Cats of all ages assume this resting position, from kittens to older cats.

Loafing normally indicates that a cat is contented and comfortable. It isn’t happy enough to rest on its back, leaving its belly vulnerable, but it isn’t feeling tense or worried.

In certain circumstances, loafing can tell you something about the health of your cat. So, you have to learn what this behavior looks like, why cats do it, and how to figure out why your cat is loafing.

Here are the reasons why cats enter the loaf position:

What does the cat loaf position mean? One reason you might see your cat lying in a loaf position is that it’s comfy. Cats like to be comfortable and always choose the comfiest places and positions to lie down.

While it wouldn’t be comfortable for you to lie on your belly with your arms crossed, it is for cats. Cats have a different skeletal structure which means that it is comfortable for them. So, a cat can choose different ways of loafing to take the pressure off its paws, legs, or stomach.

Sitting like this is similar to folding your arms in front of your chest. Sometimes, this is the comfiest way to stand, e.g., if you don’t want to dangle your arms by your sides.

This simple explanation is the most likely reason your cat is loafing.

When a cat keeps its paws under its body, its claws aren’t shown, indicating that it doesn’t feel threatened. If it did, it would sit in a position that allowed it to get away quickly.

At the same time, your cat isn’t completely at ease. If it were, it would flop onto its side and let its belly show. By not showing its belly, your cat stays reasonably secure.

All mammals produce their own body heat using the energy they get from food. They have to do so because a mammal’s internal organs can only operate at temperatures of 95-100 degrees Fahrenheit.

Because body heat is produced from the energy in food, it’s a precious resource. So, a cat will seek to preserve its heat. Your cat can do this by keeping its paws under its body when it lies down.

Also, you may notice your cat curling its tail around its back to keep it close to its body, which is for the same reason. So, you’re likely to see your cat do this if it’s feeling cold.

The problem could be overgrown claws, which curl back below the paw and make it difficult for your cat to walk. Or, your cat could have a cut, open wound, or crack on its paw pad.

If you think your cat may have hurt its paw, don’t pull the paw from underneath your cat while it’s loafing. Most cats dislike people touching their paws, and besides, it could damage the paw further.

If your cat is limping and doesn’t like putting pressure on one of its paws, it’s compromised in some way.

There’s a kind of loafing that you may observe if your cat has a condition like chronic kidney disease (CKD). According to the BMJ, CKD is a common disorder in older cats.

Some people call this the ‘meatloaf’ position rather than plain ‘loafing.’ The main difference is the position of the cat’s head. Normally when a cat loafs, it keeps its head upright, looking forward.

When a cat has CKD, it may lie on its belly with its head stretched out and pointed down. It sits in the loaf position with its paws underneath its belly and avoids putting pressure on its internal organs.

Loafing specifically occurs in CKD cats that crash, which happens when the cat’s condition suddenly worsens. Complete organ failure can happen suddenly after a long bout of chronic disease, and this kind of loafing is common in CKD cats which crash frequently.

It’s unlikely that your cat is loafing because it’s sick. The cat loaf position usually means that it’s feeling safe and secure, or it’s taking steps to insulate itself from a drop in temperature.