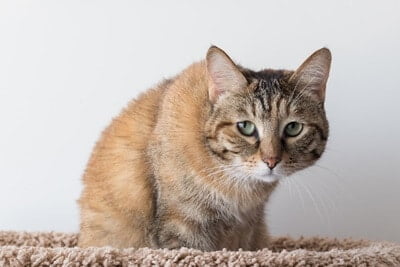 Cats are more emotional and caring than was previously thought. Recent research has many owners wondering if cats feel remorse after knocking things over, soiling the sofa, or clawing the carpet.

As cats can’t feel guilt, they’re incapable of apologizing to us. Cats know when we’re angry due to changes in our facial expressions and tone of voice, so they’ll bunt, rub, purr, and slow blink to make us happy. We anthropomorphize, believing that feline and human behaviors have the same meaning.

Cats may not understand that what they did was wrong, but they know that they want you to return to your old, happy self again. So, they do various things we enjoy to improve our mood.

Do Cats Know When They Did Something Bad?

Cats recognize when they have done something that displeases you. They don’t have a sense of right and wrong. For example, they don’t understand why scratching up the furniture is a bad thing.

Cats learn that doing certain things upsets you, so they store that information in their long-term memory.

Cats know when you’re upset because of your:

According to Animal Cognition, cats are highly responsive to the sound of their owners’ voices. When you call your cat’s name, you have a tone of voice that’s pleasant and friendly.

This is the voice that your cat will associate with good things, like playtime and feeding time. When you’re upset, you use a tone that your cat isn’t accustomed to, which lets it know that something is wrong.

Apart from auditory cues, your cat uses visual cues to know it did something to upset you. Another study published by Animals revealed that cats, especially younger ones less than 5 years old, can distinguish different emotions in humans.

Cats are hyper-aware of any changes in our behavior. Your tone of voice, expression, and actions (ignoring it, carrying it to another room) will condition the cat into knowing what you like and dislike. It may not know why doing a specific thing is bad, but the cat will know that doing it will alter your behavior towards it.

Do Cats Feel Bad When They Hurt You?

Cats don’t feel bad when they hurt you. Though cats are more emotionally complex than we give them credit for, guilt is an extremely complicated emotion that only humans can feel.

This doesn’t mean that your cat doesn’t love you and wants to hurt you on purpose. Cats can form bonds with humans and will look to them for comfort if the bond is strong enough. It’s just that cats act on instinct, so if they hurt you, it’s probably because they felt threatened in some way.

If cats can’t feel bad when they hurt you, you might wonder why yours always snuggles up to you right after it scratches or bites you. Again, cats know when you’re upset because of your voice, facial expressions, and behavior.

Your attitude toward your cat after it hurts you might upset the cat enough to want to comfort you. This doesn’t mean that it feels bad for what it did, but it does mean that it wants you to stop being sad.

Cats aren’t capable of apologizing, as this would mean that they feel guilt, understand that you have wronged someone, and want to make amends. Though cats are highly intelligent, they can’t experience such complex emotions.

This might sound strange to you if your cat always licks you or cuddles up to you after misbehaving. You might think that it’s apologizing, but it isn’t. Humans often misread animals and anthropomorphize, attributing human characteristics where there are only instincts and simple emotions.

This might sound a bit manipulative on their part. However, the fact that cats do this proves that they care enough to grab your attention and elicit positive reactions from you. Also, it confirms that your relationship with your cat is strong, and it finds you comforting.

How Do Cats Say Sorry to Humans?

Cats don’t apologize to their owners per se, but they sometimes display affectionate behavior after doing something bad. They do this to comfort themselves or get a cheerful reaction from you.

How they go about doing this depends on the cat’s personality. Cats apologize by:

Cats have been around humans for many years, so they know what to do to get our attention. If you start ignoring your cat because it did something bad and the cat knows that snuggling up next to you will melt your heart and get your attention, that’s what it will do.

If your cat doesn’t like your angry tone of voice and it hopes that bunting will get you to speak softly, it’ll do so until you revert to being happy.

How Do Cats Apologize to Each Other?

Cats don’t feel guilty when doing bad things to other cats. Cats don’t apologize to each other.

When cats fight and later comfort each other and reconnect, it’s not them apologizing. Due to how short-term memory works in cats, they might not remember that they fought in a few hours.

They want to know that the other cat is no longer hostile toward them. If they are, the area isn’t safe, and the cat will either have to fight for its right to be there or hide away. If the other cat is friendly, it can rest easy knowing that it isn’t in danger.

Usually, cats will show affection towards each other by:

Cats learn these things while socializing with their mother and siblings as kittens. Your cat might’ve missed out on these important socialization lessons because it was separated from its mother too early.

In this case, you’ll notice that the cat will be less willing to apologize to other cats or you.

How to Know if Your Cat Is Sorry

Your cat may not be able to apologize, but it knows when you’re upset and will want to re-establish a connection with you. It does this by doing things it knows will get a reaction from you, which can be anything from meowing to headbutting to licking you.

Cats are affectionate after upsetting you because they find solace in that behavior and want to use affection to comfort you. Of course, there are times when your cat might not do these things after getting chastised because it wasn’t bothered enough by your reaction to do anything about it.

Some cats even apologize to you by engaging in even more naughty behavior. For example, if you reprimand your cat after it claws the furniture and it does it again after some time. This is no different than if it had snuggled next to you for comfort.

Sometimes, a cat will want your attention once it recognizes that you’re upset, and poor behavior is sometimes the most effective way to do that. Cats don’t understand what we mean when we speak, so what sounds like disapproval to us might be perceived as normal talking to them.