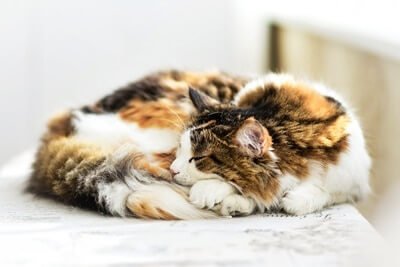 A cat’s stomach making noises after eating is normal, as strange sounds occur naturally as part of the digestive process. However, if your cat’s stomach is gurgling a lot, there may be an alternative explanation.

The most common reason a cat’s stomach produces gurgling noises is borborygmus. As food moves through the digestive tract, mixing solid, liquid, and gas particles in the stomach leads to rumbling sounds. Also, dietary indiscretions, hunger, parasites, and health problems cause weird noises.

A cat’s rumbling stomach is likely due to the digestive process, but it could also be a warning sign of something more serious. Monitor your cat for any sudden and abnormal behavioral changes.

Why Is My Cat’s Stomach Making Weird Sounds?

Humans often emit gurgling sounds from their stomachs. This may be because we’re hungry or digesting food, and cats’ stomachs make these same noises. However, as cats have small stomachs, the sound is much quieter.

A cat’s stomach gurgling is common after it eats food. If the cat is otherwise acting normally and showing no signs of discomfort, check for any sudden changes in demeanor.

A cat’s stomach shouldn’t constantly gurgle, as this can suggest that something is amiss with its digestion.

The gurgling sound arises while food is broken down and dissolved. This is known as borborygmus.

The digestive tract of cats is comparatively simple, so it shouldn’t require much effort to digest feline-appropriate food. If your cat eats a protein-rich meal, it should be fully digested within hours.

Sometimes, a cat may have slow digestion due to age-related factors. However, it’s more likely to relate to the cat’s diet. According to Veterinary Sciences, cats’ bodies aren’t engineered to digest carbohydrates or starch.

You’ll find limited carbs and starch in cat food, especially those intended for senior felines. These food groups are unnecessary for cats, and consuming them leaves them bloated and lethargic, with a stomach that gurgles loudly.

Are you late feeding your cat its dinner? If so, it may just be feeling hungry. Empty stomachs make rumbling sounds.

Cats will let you know when they’re hungry. Your cat has likely been vocalizing to you, with the meowing growing increasingly elongated. Cats grow distressed and anxious when their feeding routine is disrupted.

If your cat has eaten but still seems hungry, it may be due to higher energy needs in the cold weather. Cats are about 15% hungrier during the winter months. It’s OK to offer your cat more food during the coldest times of the year, provided that you reduce its meal size during the spring.

Worms and other intestinal parasites are a common explanation for feline stomach noises. Parasites can enter a cat’s intestines, having a significant impact on the digestive process.

If your cat has tapeworm, it’ll be more hungry than usual. Tapeworms sustain themselves on the food that your cat eats, leading to a rumbling stomach. The presence of worms can mean that noises come from a cat’s stomach.

The Journal of Feline Medicine and Surgery found that 10% of all senior cats develop hyperthyroid.

Hyperthyroidism is due to an overactive thyroid gland.

This gland, found in the throat, releases hormones to the cat’s body. An excess of these hormones will make a cat’s heart beat excessively fast (over 140 beats per minute).

Hyperthyroidism is a common explanation for a stomach gurgling through hunger. If your cat has an insatiable appetite, no matter how much it eats, this is an explanation.

In addition to constant hunger and an elevated heart rate, symptoms of hyperthyroidism include:

The strain this condition places on the heart is unsustainable. In severe cases, the thyroid gland will need to be surgically removed. More often, cats are prescribed daily medication.

Rumbling could also be a precursor to an upset stomach.

This will often manifest as vomiting or diarrhea, and the gurgling denotes a struggle to digest something that needs to be purged. Eventually, this food will be expelled.

Encourage your cat to drink more water as purging through vomit or feces will remove fluid from the cat’s body. Veterinary consultation is only necessary if your cat experiences repeat episodes for over 24 hours.

Your cat may have an upset stomach because it ate too much.

Moderate your cat’s food intake based on how much energy it’s expending. An older cat with an inactive lifestyle has a slower metabolism. As it’s not burning much energy, it doesn’t need as much food.

Consider whether your cat is eating elsewhere. If your cat visits other homes, it may be eating several times a day. Consequently, the cat’s stomach will swell and gurgle before purging the excess content.

Vomiting and diarrhea can be symptoms of allergies in cats.

When accompanied by a gurgling stomach, this reaction may stem from food allergies. The cat may also be sensitive to something in its environment.

Other than a gurgling and upset stomach, symptoms include:

A Rast test (radioallergosorbent test) may be needed to check if the cat reacts to certain antigens.

Many human foods are unsafe for cats. Avoid sharing the food you eat with a cat unless you’re certain it’s safe for feline consumption. Avoid feeding your cat scraps of old food in case it’s spoiled.

Gurgling and vomiting will follow if your cat eats something that its stomach cannot digest.

Other warning signs of toxicity include:

Toxicity – or the consumption of dangerous foodstuffs, such as spoiled meat – must be treated by a vet. This will usually involve a combination of intravenous fluids, induced vomiting, and laxatives.

The gurgling of a cat’s stomach may be a warning sign of trapped wind or gas. This will usually be a temporary issue that will go away on its own.

If a cat gulps down its food, it will swallow air, which becomes trapped in the cat’s intestines. This will result in gurgling sounds, but the gas will be expelled as a belch or flatulence.

A common explanation is that the cat is ravenous, having waited all day for a meal. If so, split your cat’s food allowance in half, feeding it twice daily. If the cat eats in the morning and evening, it’ll likely feel less hungry.

Your cat may also be insecure about its relationship with food, which is common in multi-cat households. The fear that another animal will steal food becomes greater than its desire to eat safely.

Feed the cat alone, in a separate room, to build its confidence. If your cat continues to eat too fast, get a slow feeding bowl, as they contain ridges that force it to eat slower.

If your cat is eating normally but still has gas, it may be consuming lactose. Many cats enjoy cheese or milk as a treat. Unfortunately, felines are lactose intolerant, and gurgling stomachs and gas are due to dairy consumption.

An intestinal blockage means that something prevents food from progressing along the digestive tract, leading to constipation or vomiting. The gurgling caused by this will usually be louder.

An intestinal blockage means that the stomach will be swollen and distended. The cat will also be unable to hide its physical discomfort and lose its appetite.

Cats will attempt to purge the hairball through vomiting. However, this may be impossible with larger hairballs, especially those that have reached the intestines. In this instance, the hairball will cause a blockage.

Offer your cat a teaspoon of flaxseed oil. If the cat refuses, try fish oil. The aim is to lubricate the hairball to make it easier for the cat to pass.

You can minimize the risk of hairballs by regularly grooming your cat to remove loose, dead fur.

An intestinal blockage due to the ingestion of foreign objects may arise when cats have pica (eating non-food items.) Intestinal blockages can occur if your cat is eating insoluble, indigestible items.

The foreign object will need to be removed, preferably via the throat. Unfortunately, it has usually progressed into the gastrointestinal tract. This means the blockage will need to be located and surgically removed by a vet.

A cat with IBD will experience painful inflammation of the gastrointestinal tract, which explains the gurgling. Older cats with more sensitive stomachs are most likely to develop the issue.

Symptoms of IBD in cats include:

Cats with IBD can still live a full life. A vet will prescribe medication, and your cat will be put on a specialist diet. Non-inflammatory foods will be selected to meet your cat’s dietary needs.

The kidneys will start to perform less optimally as the cat ages. As the kidneys play a large role in digestion, performance loss can have various implications.

Acute renal failure in cats occurs when the kidneys immediately and unexpectedly cease functioning. This condition is associated with toxicity, shock, or obstructions.

The symptoms of ARF include:

About 50% of cats with acute kidney failure won’t survive, and a further 25% will have permanent kidney damage.

Chronic renal failure is the primary cause of morbidity in senior felines.

Cats don’t struggle with daily life until kidney performance drops below 25%. At this stage, your cat’s stomach is likely to gurgle and swell as the kidneys are incapable of performing digestion to maximum efficiency.

While CRF will eventually be fatal, your cat’s life can be extended. Ensure that your cat is prescribed appropriate medication and attends regular health examinations.

If your cat’s stomach is constantly gurgling, it’s likely due to hunger, excessive consumption, or eating something disagreeable. If a rumbling stomach is combined with other physical symptoms, a vet will need to perform tests and scans to identify the underlying medical cause.