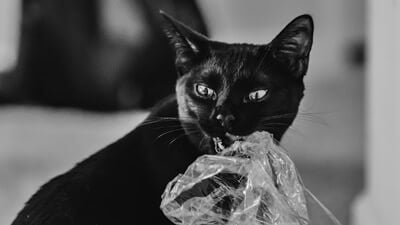 Cats have a complex and often confusing relationship with food. Felines can be really fussy about what is placed in their bowl at mealtimes. Despite this, a cat may decline expensive, specialist food and eat something non-edible, such as string, human hair, or even garbage. This suggests that your cat may have pica disorder.

Pica is a psychological condition commonly linked with younger cats. It is defined as an overwhelming compulsion to eat non-edible items such as dirt, wool, and plastic bags. Common triggers for pica in cats are nutritional deficiency, stress, territoriality, pregnancy, feline dementia, dental pain, and hyperthyroidism.

If your cat has pica, the condition mustn’t be ignored. A cat with pica may eventually experience severe digestive issues due to eating non-food items. Instead, learn why your cat has pica and take steps to resolve the problem.

Why Is Cat Eating Non-Food Items?

Cats explore the world with their mouths, which can sometimes result in cats eating things that aren’t food. You’ll find this most often occurs with items that smell unique and interesting. A cat will often decide whether to put something in its mouth based on its scent.

Most cats outgrow this behavior by the time they reach adolescence. Adult cats should certainly understand what is safe to eat and what should be avoided. However, cats can be found devouring things that have no place in their diet.

Aside from curiosity, your cat may just be hungry. Cats can be fussy about food, but they are also born survivors. If a cat is worried about getting enough food, it will seek a way to sustain itself. It is rare for a well-loved domesticated cat to feel so insecure about whether it’ll get fed. Consequently, the cat is more likely to have pica.

What Is Feline Pica Syndrome?

Pica is a compulsion to eat non-food items. It is a behavior that usually has another underlying cause. Younger cats are most likely to have the condition due to being weaned too early, but senior cats can also develop pica later in life due to medical conditions, such as cognitive dysfunction syndrome.

Your cat may be hungry, curious, or disoriented, but the result will remain the same. You must prevent your cat from eating something unsafe. To do so, you must also find out the underlying cause.

You can tell if a cat has pica by how it interacts with things that aren’t food. The cat will not tear something apart or swallow it straight down. Instead, the item will be ground along the back teeth before being swallowed, creating a sense of reward in the cat’s brain. Common non-food items that cats eat include:

Eating insects or food intended for other animals are not symptoms of pica. Many cats eat insects and bugs. This is an extension of the feline hunting instinct. Equally, a cat eating human food or dog food is likely born out of curiosity.

As long as the food is not damaging to the cat, it is not a concern. Cats can be fed dog food in an emergency. If your cat is eating strange or unusual household objects, though, this is more of an issue.

Is Pica Dangerous for Cats?

Eating items that aren’t food can be fatal. For example, your cat may eat dirt or soil that contains dangerous bacteria. Worse still, your cat may eat something that causes a digestive blockage, such as a plastic carrier bag.

If you know that your cat has pica, restrict access to anything the cat may eat and keep it indoors. Also, check for warning signs of digestive difficulties. These include:

If you notice these symptoms in a cat with pica, seek immediate advice from a vet. X-rays may be required to determine what is causing the problem. Any non-digestible item must be removed from a cat’s stomach.

What Causes Pica in Cats?

Causes vary from physical ailments to phycological distress. Some cats are genetically predisposed to pica. Feline pica syndrome is most common in these breeds:

If your cat is very young, the cat is likely to outgrow the behavior. As explained by Applied Animal Behavior Science, pica is common in kittens and young cats. If an older adult cat is showing signs of pica, there will usually be a reason:

Pica has been linked to cats being weaned too soon. Kittens should not leave their mothers until they are at least 8 weeks old. By the time that they reach this age, the cat will have been taught to eat solids.

Kittens separated too soon, or rejected by their mother, often develop pica. The cat is attempting to replicate the experience of suckling and getting nourishment from a teat. The habit may start with sucking on wool or fabric but will soon graduate to swallowing.

Scientific Reports link early weaning to aggression later in life. When adopting a kitten, ensure that it has spent sufficient time with its mother and littermates.

Shortages of iron, zinc, and calcium are most commonly linked to pica. Your cat eats non-food items in an attempt at balancing the vitamins and minerals in its body.

Wet food is also preferred for resolving food-related issues. If your cat only eats kibble, consider introducing supplements into its diet. A lack of iron is most concerning as this can lead to anemia.

Pregnant cats will be much hungrier than usual. You have heard of the saying, “eating for 2,” when referring to a pregnant human, no doubt. Pregnant cats could be eating for as many as 13. Signs that your cat is pregnant include:

In addition to hunger, pregnant cats can develop pica due to an iron deficiency.

Your cat wants to claim an item so it will eat it, meaning that no other animal can lay claim to its treasure. Manage this by ensuring that your cat has its own territory, such as a part of the house where the cat will not be disturbed.

A stressed cat will do strange things to calm itself down, leading to pica. That’s because many cats find the act of chewing comforting and calming. If you’re fortunate, the cat will settle for chewing, but swallowing non-food items is most likely. Things that can inflict stress upon a cat include:

You need to ensure that your cat leads a calm, interesting, and fulfilling life. Build more routine into your cat’s days and ensure that it is surrounded by stimulation. This can include cat trees, windows to look out of, and toys.

Also, you can manage your cat’s stress using scent. The Journal of Feline Medicine and Surgery recommends the use of Feliway spray. Once your cat calms down, you may find that pica symptoms begin to ease. The cat is no longer seeking out the calming influence of chewing and swallowing.

Cats want your attention and affection, but they want it on their terms. If your cat feels neglected, it will let you know with verbalizations and body language. These cues include:

Bringing things that aren’t food into your presence and then eating them may be a plea for attention.

Pica is a compulsion. This means that your cat may be living with obsessive-compulsive disorder (OCD.)

The Journal of the American Veterinary Medical Association links feline OCD to stress. It can also be a learned behavior as cats are natural imitators. In a multi-pet home, cats can pick up unwelcome habits from other animals. Feline OCD can be managed with Clomipramine (Anafranil), which is is a human antidepressant.

A cat with worms will be much hungrier than usual, seeking additional nourishment. Pica and intestinal parasites can create an unending loop of health issues. A cat with pica may eat dirt which could lead to tapeworms. This may result in another bout of pica which, in turn, could lead to more worms.

As explained by the British Small Animal Veterinary Association, hyperthyroidism is the excessive generation of thyroxine and triiodothyronine hormones. These are created by the thyroid gland, found in a cat’s throat. Hyperthyroidism has many symptoms, including:

Hyperthyroid cats develop pica as they are constantly seeking to eat. If food is not available, the cat will consume anything it can find, including hair, wool, plastic, and garbage.

Although uncommon, pica can be connected to dental pain. Ordinarily, cats with a toothache will avoid putting anything in their mouth. Mild, early-onset dental pain can be an exception to the rule, though. The cat may chew on anything in an attempt at soothing its sore gums.

This behavior is similar to that of a teething kitten. The cat does not initially intend to eat, just chew. The cat may end up swallowing the item, whether by accident or design. This can then become habitual.

If a cat is pawing at its face, refuses food, and drools excessively, these are signs of dental pain, usually caused by gum disease. If the cat is also chewing on non-food items, it has developed pica.

As cats grow older, their critical faculties start to fade. The Journal of Veterinary Behavior compares cognitive dysfunction syndrome to Alzheimer’s disease in humans. Cats with this condition grow increasingly disoriented, which may lead to pica. The cat is losing track of what it should and should not be eating.

There is no cure for cognitive decline in senior cats, but you can slow down the impact. Regularly play with and speak to your cat to encourage interaction. A vet can also prescribe drugs to delay the onset of this condition.

Pica is among the symptoms but arguably the least of your cat’s concerns. The Journal of Virology describes FIV as “an AIDS-like illness in cats.” As the name suggests, this condition compromises a cat’s immune system. This makes the cat susceptible to sickness it would ordinarily be able to fight off.

FeLV, meanwhile, is a contagious retrovirus. Again, the clue as to the impact of this illness is in the name. FeLV permits cancerous cells to take hold. It also weakens immunity against infections that would ordinarily cause little concern.

As these issues lead to a pica, eating inappropriate items increases the risk. A cat may consume dangerous ingredients, including bacteria or fungi, leading to a deadly infection that a healthy cat would fight off.

Senior cats, in particular, must be protected from FIV and FeLV. Ensure that your cat is vaccinated and receives annual boosters. This will drastically reduce your cat’s risk of contracting these deadly illnesses.

Feline pica is more common than many owners realize. While pica can be idiopathic, it usually has an explanation based on the cat’s health or environment. Fortunately, this usually means that the behavior can be resolved.