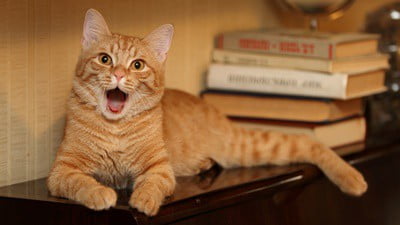 Burping is rare in cats, so when they frequently belch, it’s likely a sign that something’s wrong. Unfortunately, there’s a lack of available information about why cats burp, so it’s safe to assume it doesn’t benefit their health.

Cats rarely burp because they breathe through their noses. Most of the time, cats expel excess gas through their rectum. Burping is most commonly caused by the cat swallowing too much air as it eats, drinks, and plays. The gasses released by the stomach travel upwards, producing a burp. However, burping also occurs because of an upset tummy, hairballs, a poor diet, acid reflux, and esophagitis. If your cat has respiratory or nasal problems, the sounds it produces are similar to burps and are easily mistaken.

Pay attention to the noises your cat makes, as it can help you determine whether something’s wrong with your cat. If your cat burps frequently, there’s likely an underlying health issue at play.

Table of Contents show
1 Why Does My Cat Keep Burping?
1.1 Swallowing Air
1.2 Tummy Upset
1.3 Vomiting
1.4 Inappropriate Foods
1.5 Esophagitis
1.6 Acid Reflux
2 Why Is My Cat Burping After Drinking Water?
3 Why Is My Cat Burping and Farting At the Same Time?
4 What Health Problems Sound Like Burping?
4.1 Respiratory Noises
4.2 Nasal Problems
4.3 Coughing
4.4 Asthma

Why Does My Cat Keep Burping?

Because burping is so rare, it’s easy to mistake it for the sounds and symptoms of various health conditions. Burping isn’t a normal sound for cats, and most veterinary journals make no mention of the occurrence or how to treat problems associated with it. Some vets say that burping is impossible for cats. The jury’s out on this one, but there are clear reasons for why cats might burp. These reasons include:

Cats swallow air all the time. They do this when eating, playing, sleeping, purring, or drinking water. When this happens, the stomach releases gas that sometimes travels upwards instead of down, emerging from the esophagus as a burp.

The excess air that cats swallow while attempting to eat has to come out somewhere, and if it doesn’t escape through the rectum, it releases through the esophagus.

Cats commonly get tummy upsets, particularly if they hunt and eat their prey. Even something as simple as them eating their food too fast can cause stomach discomfort. This, coupled with excess gas, can cause your cat to belch. This will provide the cat with relief. The most common causes of an upset tummy include:

To prevent your cat from getting an upset stomach through its food:

Once your cat’s stomach issues subside, it should stop belching as often.

When cats vomit, the sounds they make aren’t too dissimilar to burping. One of the most common causes of vomiting is eating too quickly, which causes excess gas to build.

Cats also frequently expel hairballs. Similar to vomiting, when cats cough up hairballs, the noises they make a sound like a series of burps. Most owners can tell the difference between burping and vomiting, but the reasons for the two are closely linked.

Cats are obligate carnivores, so they need protein to survive. Cats should eat a specially formulated diet that contains all the amino acids, vitamins, and minerals they need to stay strong and healthy.

Dietary protein is only beneficial for cats if they can absorb and digest it properly. Owners that share their food or provide their cat with too many carbohydrates or greasy foods, their bodies will struggle to digest, making them gassy. This can lead to burping. Look for cat food that contains the following ingredients:

Animal-based proteins are more digestible than plant-based proteins. Balance the macronutrients in your cat’s diet to promote good gut health and prevent burping.

If you notice your cat burping after eating, be wary of food intolerances and allergies, as they can upset your cat’s gastrointestinal tract.

If your cat burps alongside repeated swallowing, retching, and lip-licking, the underlying cause is usually esophagitis. This is where the esophagus becomes inflamed. There are three major causes of the condition:

Cats with esophagitis experience gastrointestinal irritation, causing them to burp more. If it’s left untreated, it can lead to aspiration pneumonia, a serious condition that occurs when food gets into the lungs. As described by MSD Veterinary Manual, symptoms of esophagitis include:

If your cat burps alongside any of these signs, get it checked out by your vet. Your cat might need surgery to fix it.

Acid reflux, also known as gastroesophageal reflux, can cause frequent belching. In healthy upper digestive systems, the sphincter valve in the stomach closes to prevent the digestive fluids from refluxing upwards. When the acids residing in the gut become too great, the fluids pass through the sphincter.

Over a prolonged period of time, the esophagus becomes inflamed and painful, causing the condition we’ve already described, esophagitis. Acid reflux is a common condition in cats, especially young felines whose esophageal sphincter hasn’t developed properly. Stress and a poor diet are also to blame. Cats with acid reflux exhibit:

To treat acid reflux and ease your cat’s belching, a vet can administer drugs. You’ll also need to improve your cat’s diet and reduce the amount you feed it at one time.

Why Is My Cat Burping After Drinking Water?

If your cat burps after drinking water, it’s likely swallowed too much air. Water can be just as much of a problem for cats as food. The burping could also be a sign of an underlying health issue.

It’s also possible that your cat’s not burping but hiccupping. Cats get hiccups for similar reasons to burping. Drinking water too quickly is the most likely cause. They occur when the diaphragm contracts involuntarily at the same time the glottis closes. This is due to irritation of the nerve that runs to the diaphragm.

Normal hiccups don’t usually last longer than a day and go away on their own. If they don’t, take your cat to a vet.

Why Is My Cat Burping and Farting At the Same Time?

Excess gassiness will cause your cat to burp and fart. Your cat experiences these reactions because the body is attempting to expel as much of it as possible. Swallowing too much air can be uncomfortable for cats, so they’ll burp and fart to make themselves feel more comfortable.

There could also be other things going on within the body. This includes internal parasites and intestinal diseases. If you suspect your cat’s suffering from too much gas and appears uncomfortable, a vet can check it over to make sure nothing’s wrong. If your cat gets the all-clear, something within your cat’s diet is making it too gassy.

Because cats rarely burp, it’s more likely that the sounds your pet makes are entirely different altogether. When we hear unfamiliar sounds, we associated them with noises that we can understand. This is partly because we don’t want to face up to potential issues, but also because of naivety.

The next time your cat burps, pay attention to the sound to determine if it could be something else instead. These are likely alternative reasons for the sound:

Cats with breathing or lung problems often make raspy, wheezy sounds as they struggle to inhale enough air. These sounds surprisingly share a similarity with burps. Breathing problems commonly occur because of:

If you’re unsure whether your cat’s burping or has respiratory issues, gently open its mouth and inspect its throat and mouth for any signs of a blockage. Don’t attempt to remove it yourself, as you may push it further into the throat.

While far more rare, heart failure can make breathing difficult, as it causes fluid to build up, impacting the lungs and causing fluids to gather. This is much more likely in old cats.

Cats can also inherit a condition called megaesophagus, a deformity of the esophagus that develops in the womb. This isn’t commonly diagnosed until the kitten begins to wean from a milk diet to solid foods.

As described by Europe PMC, treatment and management of megaesophagus depend on the individual cat. But if your cat burps frequently and repeatedly and can’t seem to stop, all of these issues are potential causes.

Cats with nasal problems make various sounds, many of which sound like burps to the untrained ear. To breathe, they open their mouths, making it seem as if they’re burping. It’s not natural for cats to do this, making owners panic.

Similarly, cats with blocked or too-small nostrils snore as they sleep. These random snorts are very similar to burps, especially if they occur infrequently.

Nasal issues are more common in brachycephalic (flat-faced) cat breeds. One of them is Brachycephalic Obstructive Airways Syndrome (BOAS). PLOS explains how the smaller the cat’s nose relative to its face, the more likely it is to have the condition. Symptoms include:

Flat-faced cats also produce more sounds because their nasal pathway is much narrower. Both the nostrils and internal nasal chambers are thinner, slowing down the airflow and making cats feel congested. Some cats have elongated soft palates, making it hard for them to breathe and swallow.

While these issues don’t immediately seem related to belching, it’s easy for owners to hear the sounds associated with breathing and nasal problems and mistake them for a burp. However, cats usually have several other symptoms that suggest a health problem.

Have you noticed your cat cough? VCA Hospitals explains that even though it’s not too common in cats, they can produce a sudden, noisy expulsion of air from the lungs. Some coughs end with a retch, which can sound like a burp.

If you hear your cat burping and coughing simultaneously, your pet’s likely experienced some irritation or inflammation of the larynx or trachea. Cats are prone to colds, so this should hopefully clear up after a few days. If it doesn’t, seek veterinary treatment.

Asthma, which is a disease of the lower airways, affects around 5% of cats. Experts don’t definitively know what causes it, but they believe it’s the result of an allergic reaction to something the cat breathes in. Some cats have a more severe version of asthma than others. Symptoms include:

Your cat may also hunch over and cough or breathe rapidly. Some of these sounds – namely wheezing and chronic coughing – can sound like burps.

While burping is a bit of a phenomenon in cats, there are many reasons for it. The most likely is excess gas, but frequent or prolonged burping should always be monitored in case other symptoms accompany it.