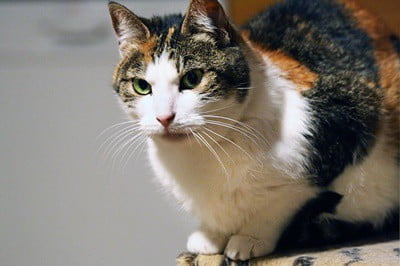 Snorting is an unpleasant sound that leads owners to question why a cat makes this noise. Snorting can sound alarming, even appearing as if a cat is struggling to breathe. However, more often than not, snorting is harmless.

Snorting in cats sounds like sneezing. Unlike the involuntary reaction of sneezing, snorting is a manual reaction that attempts to remove allergens, foreign matter, and irritants caused by respiratory infections or viruses from the nasal passage. It is more common in brachycephalic breeds with short skulls and narrow nostrils. Some cats will also snort to scare off predators or rival cats.

Understanding why your cat makes a snorting sound can offer the peace of mind that nothing is seriously wrong. Or, if you find your cat’s snorting is the sign of a health issue, you can find the right treatment and manage your cat’s problems to ensure it leads a happy, healthy life.

Table of Contents show
1 What Does It Mean When Cats Snort?
1.1 Disease or Virus
1.2 Nasopharyngeal Polyps
1.3 Brachycephalic Breeds
1.4 Warning Predators
2 When Is A Cat’s Snorting A Problem?
3 How To Prevent Snorting in Cats
3.1 Clean Living Space
3.2 Dust-Free Litter
3.3 Hot Shower
4 Is Reverse Sneezing the Same as Snorting?
5 What’s The Difference Between Sneezing and Snorting?
6 When Do Cats Snort at Other Cats?
7 Cat Snorts When Breathing
8 Cat Snorts When Eating

What Does It Mean When Cats Snort?

Snorting is similar to sneezing. When a cat snorts, it expels air out of its mouth and nose. This is usually a manual reaction to an allergen or spec of dirt that has irritated the nasal passage and needs removing. Sinus infections or viruses can also be a cause of snorting.

In most cases, snorting is entirely normal. However, if your cat snorts often and cannot seem to stop, something more sinister might be going on.

Snorting can be a sign of an upper respiratory disease, including chronic rhinitis. According to Vin, cats with this condition may produce snorting due to obstructions secondary to secretion accumulation.

To test for chronic rhinitis, vets will hold the affected cat’s mouth and one nostril closed to ensure that it can breathe through the open nostril without distress. If there is any change in effort or noise associated with single nostril breathing, there’s likely to be some degree of obstruction.

Another common virus is feline herpesvirus type 1. This virus is highly contagious, especially in shelters that house lots of animals in close proximity. Most cats are exposed as kittens and are infected by the mother cat at birth.

Exposure to feline herpes results in cats becoming life-long carriers and can, therefore, infect other cats. Vaccination can help the problem, along with the following safety measures:

A nasopharyngeal polyp is a benign mass that develops in the middle ear – the compartment just behind the eardrum. As VCA Hospitals describes, nasopharyngeal polyps can impact a cat’s breathing, and as they grow and expand, they may partially block the cavity at the back of the mouth.

The polyps then obstruct the airflow, causing affected cats to develop a distinctive snorting sound as they breathe.

Snorting is more common in brachycephalic cat breeds. This is because their short skulls, narrowed nostrils, and soft palates put them at a higher risk of respiratory illness. They also have tracheas that are more prone to collapse.

These attributes mean that brachycephalic cats, like Persians and Himalayans, tend to snort more often than other breeds. A study in Plos One confirmed that the shortness of a cat’s skull has an impact on increased respiratory difficulty and the noises that these cats make. Sounds such as snorting are likely to be louder and more frequent.

Cats snort as a form of self-defense to scare away their adversaries. To do so, they open their mouths and exhale sharply. This is to frighten off potential predators and other animals that are a threat, including animals who threaten to invade a cat’s territory or cause harm.

Snorting, in this instance, sounds very similar to spitting if the cat expels air quickly. Cats can emit this sound from around 3-weeks old but will only do so if necessary – usually after feeling threatened. Kittens will also test out the noises they make from a young age.

When Is A Cat’s Snorting A Problem?

While snorting is common and rarely cause for concern, it can be a sign of an underlying health issue. If you notice any of the following, seek guidance:

How To Prevent Snorting in Cats

While snorting may be caused by unseen allergens or is a natural part of a cat’s genetics, there are always things that can be done to lessen the impact and keep it comfortable.

Snorting might be an irritating noise for some owners, but a cat’s health should be prioritized. To help with your cat’s snorting issues, consider the following:

If dust or other allergens are causing your cat’s snorting, try to keep your living space clean to minimize dust particles or foreign matter. These may be aggravating the throat and nasal passages that are making the snorting worse.

Cleaning with fewer chemicals or choosing eco-friendly cleaning materials will reduce air pollution and help your cat adapt to its surroundings. When you do clean, keep your cat outside or in another room until the dust re-settles.

When a cat digs around in its litter tray while soiling or urinating, dust particles are often disturbed, which are, in turn, inhaled. This is an issue because dusty litter is a common cause of irritation to the throat and nasal passages.

Cats that are allergic to litter or have asthma are usually most affected. Snorting is a reaction to this irritation. If your cat’s litter tray is housed in a confined space or features a hood, the irritation will be more significant.

Traditional non-clumping litter, including clay, is dusty. Switching to a hypoallergenic litter or one that is low in dust particles will ease your cat’s litter-related snorting.

If your cat is snorting because it is congested or has asthma, you can ease the discomfort that causes its snorting by bringing the cat into the bathroom when you have a hot shower. This technique is called steam nebulization.

When you enter the bathroom, make sure all doors and windows are closed and run a shower hot enough to steam up the room. Once the room is filled with steam, keep your cat in there for around 10-15 minutes to breathe in the moisture-filled air. The dewy air will help relieve sinus congestion and allow your cat to breathe more easily.

You might need to follow steam nebulization with coupage. This is where you pat your cat’s chest to loosen fluid trapped within the lungs. Coupage can promote coughing so that your cat can bring up loosened secretions.

Is Reverse Sneezing the Same as Snorting?

A reverse sneeze is a forceful inhalation that occurs when a cat sucks air into its pharynx and windpipe. During a reverse sneeze, the soft palate goes into a spasm and makes a loud noise that sounds like choking. A cat’s owner may panic because it seems like their pet is unable to catch its breath.

Much like snorting, a reverse sneeze can be triggered by allergens, dust, or other irritants that affect the pharynx and soft palate. But it can also occur if a cat eats or drinks too quickly. Brachycephalic and small cat breeds are most at risk, but reverse sneezing can happen to all felines and usually does at least once in their lives.

A reverse sneeze only lasts for around 30 seconds and sounds much worse than it is. After this time, the sneeze will stop on its own. Treatment is rarely required. While scary, a cat should be left alone to catch its breath.

In comparison, snorting is different in that it doesn’t usually happen in quick succession. A cat will often only snort a couple of times to remove the irritant. After this, the reaction is over.

What’s The Difference Between Sneezing and Snorting?

It’s helpful to determine when a cat is snorting as opposed to sneezing, as intervention may be needed to relieve the irritation in your cat’s nasal passage.

A sneeze can be described as a sudden, involuntary outflow of air through the mouth and nose from the lungs. It’s usually an automatic, uncontrollable response to an upper airway’s irritation, including a simple nose tickle or congestion caused by a virus.

On the other hand, snorting looks and sounds like a sneeze, but the difference is that it is a voluntary process to try and manually remove the same irritants. A cat often carries out snorting because the sneeze hasn’t come naturally, so a cat will take matters into its own hands to remove the irritant.

Both sneezing and snorting can be the sign of disease, virus, or infection, and should be checked out if it doesn’t clear up naturally after a few days.

When Do Cats Snort at Other Cats?

If a cat feels threatened by another cat, either because it’s invading its territory or preparing to attack, a cat will make a series of noises, including snorting and hissing. This is to scare the predator animal away. These sounds are usually accompanied by a wildly swishing tail and pressed-back ears as the cat attempts to assert its dominance.

When confronted by another cat, snorting is less frequent than growling. But when a cat is scared, startled, or angry, it will vocalize these feelings of distress by any means necessary to gain the upper hand and scare its rival off.

If a cat snorts while breathing, cat asthma might be to blame. Cat asthma manifests itself as large, deep, heaving breaths. It’s often accompanied by regular coughing or wheezing. Feline asthma is when the lower airways become inflamed when triggered by allergens, resulting in difficulty breathing. A cat will make a snorting sound as it tries to catch its breath.

Brachycephalic breeds might snort if they are excited. Exerting a significant amount of energy – for example, climbing a fence or chasing a bird – will also cause a brachycephalic cat to snort.

This is due to genetics. Their flat faces and short nasal passages cause affected cats to snort when air is moved quickly through their nostrils. It sounds like they are struggling to breathe, but it should only last a few short minutes and is usually harmless.

Some cats emit a type of snorting sound when they eat. This can cause concern for owners, as it can sound like their cat is struggling to breathe as it feeds.

The worst-case scenario for this is dysphagia. This is a medical term given to a cat that has difficulty swallowing. It can occur in the mouth, the pharynx, or at the far end of the pharynx entering the esophagus.

Dysphagia has many causes, including dental disease, tongue paralysis, or an inability to open the mouth. Affected cats will eat with their heads tilted to one side and repeatedly attempt to swallow to keep the food down. Gagging will follow. This is when snorting will occur as the cat tries to stop itself from being sick or keep the food down.

In most cases, if a cat snorts while eating, it has a blocked or congested nose and finds it difficult to breathe. Cat flu or respiratory illness is commonly to blame and will need monitoring in case the condition worsens.

In the meantime, hand-feeding a cat who is struggling to eat is the best cause of action. This will prevent the cat from burying its face into its feeding bowl and helps the cat maintain the desired eating posture.

Snorting is common in cats. It can sound worse than the issue, but there’s no reason to worry. Monitoring your cat’s snoring is always advised, as health issues can be identified and treated immediately.