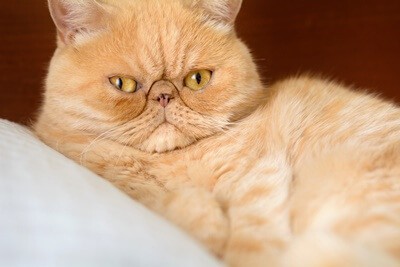 Flat-faced cats divide opinion. To some, they’re odd-looking, while others think they’re adorable. Whether you love or hate them, brachycephalic cats, as they’re also known, are definitely intriguing.

Persian cats have the flattest faces. Other brachycephalic cats include the British Shorthair, Selkirk Rex, and Silver Persian. These cats have short muzzles and big eyes, but their faces aren’t as flat as Persians.

Due to their extreme features, Persian cats are prone to illness. Cats with wide, but not completely flat, faces tend to be healthier because their eyes and nose can still function normally. So, although Persian cats have a wow factor, other breeds are easier to care for as pets.

Why Do Some Cats Have Flat Faces?

Brachycephalic cats have been selectively bred over generations. When Persian cats first came to Europe in the 1600s, they had wide faces and small muzzles, but their faces weren’t completely flat.

In the 1950s, breeders discovered a Persian cat with a very flat face (a genetic mutation). They began to selectively breed for this characteristic. So, over the years, Persian cats’ faces have become flatter.

Other types (i.e., Scottish Folds) have also been selectively bred in this way.

The much-loved Grumpy cat raised the profile of flat-faced cats across the world. Her continually grumpy expression was cute, funny, and heartwarming, all at the same time.

Also, many celebrities have been pictured with their flat-faced cats, which has driven up demand for Scottish Fold cats and Exotic breeds.

Very flat-faced Persian cats are popular with cat fanciers because this is a trait judges look for. However, most people prefer cats with milder features.

Cats with round faces, big eyes, and shallow (but not completely flat) faces are preferred. These cats are cute and have fewer health issues.

As explained, the name for flat-faced cats is brachycephalic.

Cats that fall into this category have a broad, short skull. Due to this, they tend to have short muzzles and big eyes. The wide-eyed surprised look is quite common in brachycephalic cats, and this is what many people find so endearing.

Persian cats are the most well-known flat-faced cat. These cats originated from Persia (Iran) and were first introduced into Europe in the 1600s.

They originally had quite round faces and short muzzles, and these characteristics have been exaggerated over the years through selective breeding. Modern-day Persian cats tend to have squashed faces and big, glassy eyes.

However, some breeders prefer traditional Persian cat characteristics. You can find more traditional-looking Persian cats if you visit different breeders.

Persians are longhaired cats, so they require a lot of grooming. They can also feel overwhelmed in a noisy environment, so they might not get along with young children.

That said, the Persian cat is affectionate and enjoys being stroked.

Some Cat Associations classify the Exotic Shorthair as a type of Persian, whereas others see it as a different breed.

These cats are similar to classic Persians, but they don’t require much grooming.

Like Persians, exotics tend to be quite stocky, but they may be a little smaller. As with Persians, they are calm and collected and enjoy living in a peaceful environment.

Exotic Shorthairs may be slightly more playful than Persians, but don’t expect to have an overly active cat.

The Himalayan cat is a cross between the Persian and the Siamese.

Because they’re half Siamese, Himalayan cats inherit the beautiful Siamese color points. This means their ears, tail, and paws (their points) are tipped with brown, blue, or lilac.

A Himalayan cat is more affectionate than a Persian because they have the neediness of a Siamese, but they’re not as talkative as pure Siamese.

These cats are longhaired, so they require more upkeep. They’re also one of the most expensive flat-faced cats.

The chinchilla cat is probably the most beautiful flat-faced cat. They emerged when breeders were trying to create a silver Persian.

These cats have white fur tipped with gold or silver specks. They have striking blue or green eyes. Their nose is nowhere near as flat as Persians, but they have a short muzzle.

Because their face is not entirely flat, they experience far fewer health problems than traditional Persians.

Silver Persians are longhaired, so they still require a lot of care. Some Cat Associations don’t recognize this breed, so they tend to be kept as pets rather than show cats.

They have become more popular in recent years, especially among celebrities. According to the BBC, all Scottish Fold cats descend from a Scottish barn cat called Susie whose ears folded forwards.

In 1961, a local man recognized Susie’s uniqueness and started a breeding program. In 1966, he registered the ‘Scottish Fold’ Breed with the Governing Council of the Cat Fancy. However, a decade later, the GCCF took this breed off their books due to the number of health problems.

Other Cat Associations still recognize Scottish Fold cats worldwide, and they remain quite popular in the U.S.

The Selkirk Rex cat has grown in popularity in recent years.

This cat has a short muzzle and round face, but the features are not extreme. These cats are endearing because they talk a lot. The Selkirk Rex is also low maintenance because their hair is short and curly.

The Selkirk Rex isn’t as stocky and has more energy than many flat-faced breeds. Since most pedigrees should live indoors, you’d need to give a Selkirk Rex plenty of attention and toys to play with.

The British Shorthair cat is one of the most popular pedigree cats. This cat is calm, affectionate, and doesn’t need much exercise.

It’s easy to fall in love with a British Shorthair’s eyes. Their eyes are big and round and make the cat look constantly surprised. The British Shorthair has a reasonably flat face, but the nose is not squashed.

British Shorthair cats tend to be big and stocky, and they don’t tend to experience as many health problems as the Persian or the Scottish Fold.

British Longhaired cats have a similar face and temperament but extremely long hair. Their tails are bushy and can be difficult to maintain.

Most British Longhaired cats are kept by cat enthusiasts rather than regular owners.

The Bombay cat is the most talkative of all cats with flat faces, as well as the most active. Like the Selkirk Rex, this cat is thin and agile rather than big and stocky.

The Bombay cat has black, silky fur, so some call it the mini panther.

It has a flatter face than regular cats, but it’s nowhere near as flat as a Persians. So, Bombay cats tend to be healthy cats.

In the 1930s, a cat from Burma was bred with a Siamese from the U.S, which is how the Burmese breed began.

Burmese cats are either solid brown or have Siamese points (beige, grey, or blue). Most show-worthy cats are brown, but some Cat Associations recognize the Siamese markings.

Their faces are round, and they have large eyes. Most Burmese have short, stocky legs, but they tend to be a lot smaller than Persian cats.

The nicest thing about Burmese cats is their soft and silky fur. These cats are shorthaired and require little grooming.

Burmese are friendly, playful, and highly intelligent. They tend to have more energy than most other brachycephalic cats. You can even train some Burmese cats to fetch a ball in the same way that a dog would.

Though Burmese cats are active, they have an off switch. Most Burmese love to curl up on their owner’s bed at night.

The Burmilla is one of the cutest cats. They’re smaller and thinner than many other breeds.

Like the Persian cat, they have a broad, shallow face and big, beautiful eyes. However, because the Burmilla cat has a strong, defined chin, its face doesn’t look squashed.

The Burmilla is a cross between a Burmese and a Chinchilla cat (Silver Persian). Burmilla cats tend to live long and healthy lives.

The breed dates back around 30 years, but Burmilla cats remain quite rare in the U.S. Along with Persians and Himalayans, they are one of the most expensive flat-faced cats.

How Much Do Flat-Faced Cats Cost?

If you want to buy a flat-faced cat, you need to find a reputable breeder.

Although brachycephalic cats share similar facial features, they aren’t all the same. If you’re looking for an active and playful cat, the Selkirk Rex, Exotic Shorthair, Bombay, and Burmese breeds are good options.

If you want a flat-faced cat but are concerned about health issues, the British Shorthair, Selkirk Rex, Silver Persian, Bombay, or Burmilla cats are good choices.

If you want a small and nimble cat, the Bombay and Burmilla breeds are your best option. And if cats with big eyes melt your heart, look for a British Shorthair, Burmese, or Burmilla.

Longhaired cats make great show cats, but they need a lot of grooming. Opt for a shorthaired cat if you can’t commit to a daily grooming schedule.