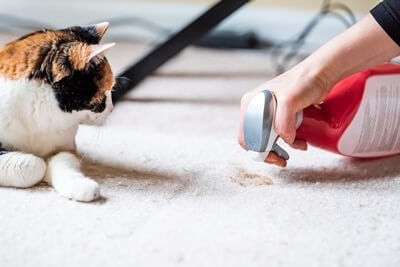 Cats throw up for various reasons, and if it’s a one-off event, there’s no need to be concerned. The exception to this rule is if your cat’s vomit is brown.

Brown vomit in cats can be due to internal bleeding, intestinal blockage, fecal matter in the digestive tract, ulcers, constipation, or cancer. A vet should immediately see a cat that brings up brown fluid.

Other reasons for concern are when vomiting becomes a regular event, there’s more than one episode of vomiting in 24 hours, or the cat has stopped eating and drinking for more than 24 hours.

Table of Contents show
1 What Causes Cats to Vomit?
2 Cat Vomit Color Meanings
2.1 My Cat is Throwing Up Light Brown Liquid
3 Why Does Brown Vomit Suggest Blood?
3.1 What is an Intestinal Blockage?
3.1.1 How Can Feces Get into My Cat’s Digestion?
3.2 Dark Brown Vomit and Hairballs
3.3 Cat is Vomiting Bile
3.3.1 Vomiting Bile And Not Eating or Drinking
3.3.2 Vomiting Bile and Losing Weight
3.4 Cat Is Throwing Up Undigested Food
4 How Can I Prevent My Cat from Vomiting?
4.1 Vomiting Associated with Food
4.2 Consumption of Toxins
4.3 Throat Irritation
4.4 Vomiting Hairballs

What Causes Cats to Vomit?

Dietary reasons for a cat to vomit include:

Lifestyle explanations for a cat to vomit are:

The color of your cat’s vomit can reveal the problem:

My Cat is Throwing Up Light Brown Liquid

Never ignore a cat vomiting brown fluid as it could signify any of the following health concerns:

Kibble will usually be brown, so there’s a slim chance that your cat ate its dry food too fast.

Why Does Brown Vomit Suggest Blood?

When a cat vomits blood, it’ll have soiled and darkened, giving it a dark brown coloring. Red vomit is likelier to be fresh blood, suggesting a mouth injury or gum disease.

Internal bleeding in cats can have several causes, including:

If your cat’s complaint is not due to a medical condition, it may have consumed toxins.

The Journal of Feline Medicine and Surgery details the risk of contaminants in hunting cats. Your cat may have eaten prey that had consumed rodent poison (known as secondary poisoning), causing internal hemorrhaging.

What is an Intestinal Blockage?

When your cat eats, food passes through its digestive tract.

If its small or large intestine is blocked, the food cannot be digested. This is dangerous as the food will remain in your cat’s digestive tract and go rotten, and it’ll also prevent your cat from eating.

Aside from brown vomit, warning signs of a blocked intestine are:

How Can Feces Get into My Cat’s Digestion?

Fecal matter emerging as vomit would be a medical emergency, but it’s rarely the case that brown vomit is feces. You’ll know when your cat vomits fecal matter due to the odor.

This issue is usually due to chronic constipation. If waste isn’t excreted, it’ll cause a blockage, which will work its way back through the cat’s body.

Hairballs are unpleasant and can present health risks, but your cat will usually be fine. This changes completely when a cat vomits brown liquid with a hairball, suggesting that the hairball is causing an intestinal blockage.

The likeliest explanation for this is hair wrapping itself around the intestine or from the furball growing in size. Eventually, no more food can pass by.

Your cat will have scans to assess the size of the hairball. If small enough, it may be purged naturally. Sometimes, your cat will be given laxatives to aid this process. However, it’s likelier that the hairball will need to be removed.

Non-surgical removal involves anesthetizing the cat and using a nasogastric tube. While still invasive, it requires less recovery time. If hair needs to be unwound from the intestine, your cat will undergo open surgery.

Bile is a green-yellow liquid generated in your cat’s liver and stored in the gallbladder.

Bile emulsifies the food that your cat eats. The food works its way down the digestive tract into the small intestine, where the bile does its work. If your cat vomits bile, this liquid has leaked into its stomach.

If this only happens once, vomiting should purge it from the stomach. If your cat regularly vomits bile, it has a health concern, such as:

Bilious Vomiting Syndrome is a form of chronic acid reflux. If the stomach is empty, it’ll have nothing to purge, so your cat will throw up bile instead.

This is often due to a poor diet, so check the nutritional value of your cat’s food to ensure that it’s balanced. An excess of protein, fat, or fiber can cause Bilious Vomiting Syndrome.

Vomiting Bile And Not Eating or Drinking

A cat with no appetite that vomits bile has a blockage of the small intestine. This blockage is painful and prevents food from being digested. The hunger will result in acid reflux because the cat has no solid food to purge.

Attempt to convince your cat to eat with broth or flavored ice. The more your cat eats, the more likely its digestion is to improve. If your cat regains its appetite, it’ll start to recover.

Even a healthy cat can’t survive without food and water for more than a few days. If your cat doesn’t eat for more than 24 hours, take your cat to see a vet as surgery may be required to remove the blockage.

A cat suddenly losing weight is always a concern but, coupled with the vomiting of bile, it’s a medical emergency.

Your cat could have a digestive issue and be losing weight because it cannot digest food, which is why it’s vomiting bile. Your cat’s insides sense toxicity, but there’s no food for it to purge.

Your cat is at risk of fatty liver disease. If your cat’s liver isn’t functioning optimally, it’ll draw energy exclusively from fat, leading to a jaundiced appearance and weight loss.

Another explanation is cancer of the bile duct. As The Journal of Small Animal Practice explains, bile duct cancer is rare but remains possible. Before seeking medical assistance, you should consider these questions:

Cat Is Throwing Up Undigested Food

The temperature of cat food is important, so never feed a cat food from the fridge as digestion will be harder. Allow food to reach room temperature before serving. If necessary, use a microwave to warm it up.

A cat must gradually be introduced to a dietary change, especially when switching from wet food to kibble or vice versa. Mix new food in with old, gradually adjusting the ratio over time.

How Can I Prevent My Cat from Vomiting?

If your cat is vomiting due to dietary or lifestyle reasons, you should take steps to prevent this from happening. You may not always be successful, but you can reduce the number of episodes.

Rapid eating is a common explanation for a cat throwing up after eating.

Hunger can be resolved by breaking your cat’s food into two servings for morning and evening consumption.

If you have two cats, feed them in separate locations so that one cat doesn’t overeat.

If your cat eats quickly through habit, get it a slow feeding bowl. These are dishes fitted with ridges and grooves, making it impossible for a cat to eat too fast.

Toxins will always lead to vomiting in cats. The body instinctively understands that it has consumed something harmful, so an urgent attempt to cleanse its system will commence.

The only way to stop a cat from consuming toxins is by preventing access. Cats are curious animals that will explore the world via their mouths, so keep anything harmful locked away.

Play with your cat as you can sate its hunting. That way, your cat’s less likely to hunt wild prey, reducing the risk of secondary poisoning.

If your cat has an irritated throat, it has likely swallowed grass. Many cats enjoy grazing on grass and plants, but vegetation can become trapped in a cat’s throat.

This happens in the pharynx, which is found at the back of the throat and links the mouth and windpipe. Getting something stuck in the pharynx can cause foamy, phlegmatic vomit.

Only a vet should attempt to remove the grass, so never attempt this procedure yourself at home.

Hairballs are a fact of life for cats, but you can minimize their impact by assisting with grooming. Get a quality hairbrush with soft bristles so your cat doesn’t object. Get your cat into a routine of being brushed daily.

It may take some practice to optimize the routine as some cats become overstimulated. If your cat starts to fidget, let it go and try again later when it’s more relaxed.

The aim of brushing a cat’s hair is to remove the dead fur fibers. When a cat grooms, it cleans itself, licking its fur with its rough tongue to redistribute oils. In doing so, hair sticks to the tongue and is swallowed. These hairs congregate in a cat’s stomach and must eventually be purged.

The more dead fur you remove from your cat, the less likely your cat is to experience problems.

Mix a teaspoon of olive oil into your cat’s food, as this will help it pass a hairball more easily. Olive oil is a natural feline laxative, but limit usage to 2-3 times per week.