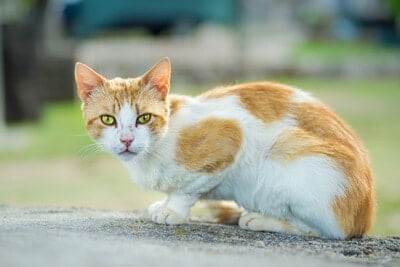 If your cat’s eating lots of food yet remains thin, you’ll be concerned. We know that overindulging in food leads to weight gain, so it’s hard to understand how a cat could overeat but stay very lean.

If a cat is hungry but skinny, this may be due to parasitic worms, which consume any food that’s been ingested. Diabetes, hyperthyroidism, and inflammatory bowel disease interfere with food absorption, so cats can eat voraciously yet lose weight. Also, ensure that another pet isn’t eating its food.

Occasionally, neither medical nor psychological factors are to blame for a cat’s excessive hunger. Your cat may be hungry because it’s not getting sufficient calories or is eating less nutritious food.

Why Is My Cat Hungry All the Time?

Polyphagia is the medical term for excessive hunger. Hunger is a complex process that’s affected by physical and psychological factors.

While the cause of polyphagia isn’t always easy to discern, the following explanations may apply:

Perhaps your cat is genuinely hungry. This could be because you are not feeding it enough, another animal is stealing its food, or its energy needs have significantly increased.

If you feed your cat enough calories but the food is devoid of essential nutrients, it may instinctively develop constant food cravings.

If your cat is bored or lonely, it may learn that begging for food gets it more attention.

Not only that, but they may become addicted to the sensory pleasure of eating, especially if they don’t have any other forms of stimulation and enrichment.

However, if your cat is overeating due to psychological factors, you’d likely see some weight gain.

If you’ve noticed some weight loss along with increased appetite, your cat likely has an illness or disease.

Diseases interfere with the cat’s hormones, metabolism, and digestive health. Unfortunately, they’re common in older age, such as kidney disease, but some treatments ease the symptoms.

Symptoms of Polyphagia in Cats

Here are the most common signs of polyphagia in cats:

If these apply, your cat is eating excessively due to an endocrine or digestive disorder.

A good owner would never willingly underfeed a cat, but it can happen.

A cat may go hungry if the following apply:

According to NAS, an average domestic cat has the following daily kilocalorie (kcal) requirements:

If your cat’s hunger seems out of control, consider how regularly you’re feeding it.

Cats love to graze on food throughout the day. If you feed them 4-8 small meals per day at consistent intervals, your cat is less likely to experience hunger pangs.

When it comes to feeding your cat, consistency is paramount. If your cat is forced to wait hours for a meal, it’ll be ravenous by the time the food arrives.

If your feeding schedule is irregular, your cat may develop a condition called psychogenic abnormal feeding behavior, causing them to steal food, binge eat, and pester you for food.

Why Is My Cat Eating A Lot But Losing Weight?

Here are the various explanations for weight loss among cats that are eating well:

Cats fed leftovers may develop deficiencies if they don’t consume a wide range of foods.

Deficiencies in the following vitamins and minerals can increase a cat’s food cravings:

If your cat is ravenously hungry constantly, this may indicate that it lacks a vital nutrient in its diet. You can prevent this from happening by getting a complete cat food.

If you’re already providing your cat with a nutritious, calorically dense diet and it’s still constantly begging for food, it could have one of the following conditions:

Hyperthyroidism is an endocrine disorder that’s relatively common in older cats. It occurs when a cat secretes too much thyroid hormone (T3 and T4) from the thyroid gland in its neck.

This speeds up the metabolism, thereby increasing appetite. Occasionally, hyperthyroidism can dampen a cat’s appetite, but this is less common.

Here are some of the additional symptoms of thyroid problems to look out for:

If your cat has an overactive thyroid, it can be given radioactive iodine therapy. Occasionally, surgery is required to remove the thyroid gland.

Scientists believe that a high iodine diet may aggravate the condition because iodine facilitates the production of thyroid hormones.

If insulin is low, glucose can’t be transported around the bloodstream effectively, leading to lethargy and extreme hunger. Diet is thought to play a key role in developing this disease, as some mass-produced cat foods contain large amounts of carbohydrates and hardly any protein.

This has contributed to a rise in type 2 diabetes. Cats living in the wild would eat a high-protein diet, making them less susceptible to this disease.

Diabetes is sometimes quite difficult to distinguish from other diseases, although the Blue Cross has summarized the symptoms to look out for:

The standard diabetes treatment is insulin injections and improving your cat’s diet.

Acromegaly is linked to diabetes because cats with this disease have difficulty maintaining a healthy blood glucose level. So, it’ll feel hungry and thirsty all the time and may have some of the other symptoms associated with diabetes.

Feline acromegaly occurs when too much growth hormone (IGF-1) is produced in the pituitary gland, resulting in the following physical changes:

If you observe these physical changes, along with an increase in hunger/thirst, you should consult a vet. If your cat is diagnosed with acromegaly, the severity of the symptoms can be managed.

If your cat eats a lot but is skinny, it could have feline inflammatory bowel disease (FIBD).

FIBD occurs when the gastrointestinal (GI) tract walls become inflamed. The GI tract comprises the esophagus, stomach, intestines, and colon, so inflammation of these locations can cause FIBD.

Due to this inflammation, food cannot be absorbed properly, so it’s usually thrown up as foamy vomit or comes out as loose stools. The cat cannot absorb enough nutrition from its food, so it’ll feel hungry.

Given that FIBD affects any part of the GI tract, there are various causes:

Your vet may suggest switching to hypoallergenic cat food or managing stress in the household. If these treatments are inappropriate, your cat may be prescribed antibiotics or anti-inflammatories.

Parasites can sometimes be the culprit for inflammatory bowel disease. Parasitic worms such as tapeworms, roundworms, and hookworms interfere with digestion and increase a cat’s appetite.

If your cat frequently plays outside, or you have other pets in the household, the risk of contracting worms increases. Worms can be caught from fleas or the soil where other animals have defecated.

The easiest way to detect worms is by examing the cat’s stools or vomit. Worms will usually be white/gray, although they’re not always visible to the naked eye.

Worms can cause weight loss, malnutrition, and death if they’re not treated appropriately.

Having cancer may impact a cat’s appetite because:

Nevertheless, cancer is less common than many other conditions, and it usually decreases a cat’s appetite.

If your cat is fed a quality diet, is fit and healthy, but is always begging for food, it may have psychological/emotional hunger, known as psychogenic abnormal feeding behavior.

Here are the causes of this condition:

If your cat doesn’t get much attention or opportunity to play, the sensory pleasure of eating may become central to its life. This can cause your cat to overeat or constantly beg for food.

According to the Telegraph, cats that beg for food may have a psychological addiction rather than a physical need or a medical condition. This is due to the sensory pleasure of the food and the attention they receive at mealtimes.

This double stimulation can be addictive for cats, causing them to constantly beg for food. For example, if several family members feed the cat throughout the day, it may become addicted to food and the feeling of being cared for by several individuals.

This is quite common among cats who have been neglected or share meals with others. If they don’t know when the next meal is coming, this can lead to bingeing and stealing food.

If your cat is overeating out of boredom or addiction, it’ll probably see some weight gain. However, owners aren’t good at recognizing weight gain in their pets, especially if a cat has a long, thick coat. So, don’t be too quick to disregard psychological hunger as a factor.

If a vet determines that there’s nothing medically wrong with your cat, its excessive hunger may be caused by psychological factors. Alternatively, it may be experiencing genuine hunger pangs due to a calorie and nutrient-deficient diet.