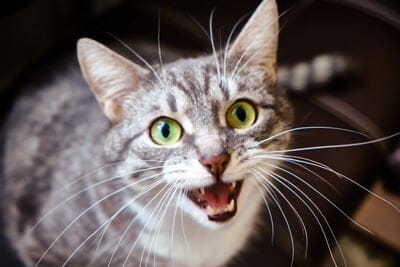 When a cat meows silently, it’s usually to gain the attention of a human and make an important request. Obviously, this demand relies upon the meow being audible. If your cat’s meow sounds like a whisper, you may grow concerned about what’s wrong.

Some cats start a meow low, almost silent, and raise the volume to denote increasing urgency. Alternatively, the cat may be using a pitch too high for humans to detect. If a cat tries to meow but cannot, it may have a respiratory infection, allergic reaction, or throat blockage.

Unless your cat is visibly distressed, a silent meow isn’t necessarily anything to be concerned about. It’s still something to pay attention to, though.

Table of Contents show
1 Why Does My Cat Whisper Meow?
1.1 Seeking Attention
1.2 Communicating with Other Cats
1.3 Frustration
2 My Cat Tries to Meow But Can’t
2.1 Sore Throat or Laryngitis
2.1.1 Respiratory Infections
2.2 Stress and Anxiety
2.3 Allergies or Irritations
2.4 Hyperthyroidism
2.5 Throat Blockage

Why Does My Cat Whisper Meow?

The question “why does my cat whisper meow” arises among most owners at some time or another. While some cats are naturally quieter than others, we expect a certain level of vocalization.

Here are the possible explanations:

The journal Animals stated that every cat meow has a meaning, usually connected to a request.

Common reasons for a cat meowing at owners include the following:

Cats understand that meows are unlikely to go ignored. All the same, they don’t necessarily need to start their verbalizations at full volume. Some cats may initially choose to meow in a whisper or even silently.

If this goes ignored, the cat may increase the volume until it receives the desired response. Your cat will have learned exactly how to manipulate you and that it does not need to meow loudly for attention.

Communicating with Other Cats

Meowing is an act that cats reserve exclusively for humans. As explained by the European Journal of Companion Animal Practice, cats rely more on body language when communicating with each other.

Cats still use verbalizations to express themselves to each other, though. For example, it’s common for two cats to hiss or growl at each other. If your cat appears to be issuing a silent meow, ensure that you are the intended recipient.

Cats have a hearing range of up to 64,000 Hz, while the human ear peaks at 20,000 Hz, even less as we age and start to struggle with our hearing. This means that cats may be deliverable communicating at a pitch inaudible to the human ear.

In some cases, your cat may opt to whisper meow out of frustration. Some cats will whisper meow as a last resort if previous verbalizations have not yielded the desired results. Essentially, this is your cat muttering unhappily under its breath.

If your cat is whisper meowing out of frustration or irritation, it should be a temporary – even a one-off – scenario. If your cat constantly feels this dissatisfaction, it’s likely to act out physically.

Watch your cat’s body language and behavior when it indulges in a frustrated whisper meow. If your cat looks at a vase or glass of water while whisper meowing, don’t be surprised if it’s pushed off a table.

My Cat Tries to Meow But Can’t

You’ll be concerned if a cat tries to meow, but nothing comes out. If you’re asking yourself, “why does my cat silent meow at me?” make sure this mute approach is deliberate.

Next time you ask, “why is my cat’s meow silent?” observe your cat’s general demeanor and behavior. Does it appear to be living in contented, companionable silence, or is it showing signs of discomfort?

If your cat isn’t conducting its usual routine, there’s a good chance the silence or whispering nature of its meow is connected to a health concern.

If a cat suddenly loses its voice and becomes hoarse or even silent, it may have lost its voice. As with humans, that could be blamed on a sore throat (laryngitis).

If your cat has been meowing all day, it may have strained its voice box. Your cat will recover and soon restore normal volume with a little rest. Consider why your cat felt the need to be so vocal earlier, though.

A more serious concern is laryngeal paralysis. Veterinary Surgery explains that, in many cases, laryngeal paralysis is idiopathic (has no direct explanation.) Surgical intervention is almost always necessary as this condition prevents a cat from breathing and eating.

Another medical explanation for a silent meow, either instead of or alongside laryngitis, is a respiratory infection. Cats can be prone to conditions equivalent to the common cold. Examples of this include feline herpesvirus (FHV) or feline calicivirus (FCV.)

Symptoms of upper respiratory infection in your cat include:

After a week or two, most cats will recover from a respiratory infection, provided they get enough rest in a warm, quiet room. Like humans, your cat will need to sleep off the infection and ride it out. If the cat is still struggling after this time, a course of antibiotics may be required.

Stress will take a toll on a cat, especially when it’s older, and lead to ill health. It’s easy to inflict stress and anxiety upon a feline, so be mindful of your cat’s daily routine.

Cats can be subject to allergic reactions in the home, most of which come with a range of symptoms. The most common warning of an allergic reaction is sneezing, coughing, and streaming from the eyes or nose. The throat of your cat may also close up, though.

Cats can be allergic to anything, and these allergies can arise seemingly from nowhere. All the same, if your cat seems to have suddenly developed an allergy, something in its environment has likely changed.

Examples of this could include:

Consider any food or water bowls you’re using, especially if they’re new. Plastic is a surprisingly common allergy in cats and can lead to swelling in the throat.

Hyperthyroidism is a health concern resulting from the thyroid gland creating and releasing excessive hormones. The thyroid gland is found in a cat’s throat and grows swollen when overactive, impacting a cat’s ability to meow freely and loudly.

Alongside a silent or quiet meow, common symptoms of hyperthyroidism in cats include:

The Journal of the American Veterinary Medical Association explains that canned fish or liver meals have been associated with hyperthyroidism. A cat that lives with this condition will require lifelong medication.

Perhaps most concerning is a blockage in your cat’s throat that prevents it from verbalizing appropriately. This could be a temporary or permanent setback, but neither should be ignored.

Food trapped in the throat is an obvious example of a blockage. This may arise if your cat eats too quickly or is fed a diet that it struggles to chew. If your cat is older than 10, it likely has weak teeth. Switch to a senior food and consider softening any kibble with broth.

Hairballs are a common concern for cats. Whenever your cat grooms itself, it swallows hair. This can eventually build up and become trapped in the throat or stomach. Resolve this by encouraging hydration or offering your cat a teaspoon of digestible oil.

More worrying is a blockage inside the body, not through an external object. Your cat may have throat polyps, which are typically benign but must be removed. More disturbing is the potential of malignant growths in the throat.

A silent or low-volume meow from a cat is not necessarily a reason to be concerned. If uncharacteristic silence becomes a long-term worry, you may need veterinary intervention.