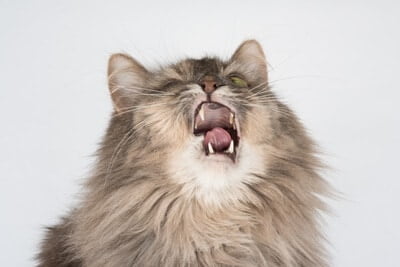 Cats sneeze excessively when their nose is irritated or blocked with an excess of mucus. The sneezing fits are an attempt to clear away the irritation or blockage. This is an instinctive response. As such, dirt, hair, fiber, or pollen particles can trigger a sneeze. Usually, it’s a benign reaction, but if the cat sneezes all of the time, it can have a more serious reason.

Cats may repeatedly sneeze when they experience an allergic reaction or an upper respiratory infection. An excess of mucus can also trigger sneezing. This may be caused by cat flu, changes in the temperature, or different levels of moisture in the air. In particular, dry air can negatively impact your cat’s nose by irritating the mucus membrane, making it sensitive. Continuous sneezing may seem unusual, but isolated cases are rarely a concern.

Even still, you should be cautious if other symptoms appear with the sneezes. This is also true if the sneezing fits are persistent over several days. Such symptoms include bloody or colored mucus, loss of appetite, and excessive scratching. If your cat displays mouth sores and coughing, it may be ill.

What Does It Mean When A Cat Sneezes Continuously?

In most situations, cats sneeze for the same reason as humans. There’s fluff, pollen, or dirt tickling their noses. A sneeze is an instinctive reaction to eject foreign particles from the nostrils. It’s the body’s effort to keep the nasal passages clear and clean.

Almost every creature with a nose similar to ours will have a kind of sneeze reflex. One sneeze usually does it, but if there’s a cat sneezing fit, that just means the foreign particle is caught in its mucus membrane.

This membrane is located within the nose and is designed to keep particles out. To properly clear itself, it will cause your cat to sneeze multiple times in a way to eject the intruder. If the cat keeps sneezing but seems fine, it can mean the feline is continuously inhaling an irritant. There may also be excessive mucus production clogging the respiratory system.

Your cat will sneeze out the problem or move away from the constant irritant and feel better. You don’t need to worry unless:

Multiple fits or frequent sneezing are usually a sign that something is going on. You’ll need to take a closer look to determine if this is benign or worrisome.

What Causes A Cat To Sneeze Continuously?

Cats don’t sneeze without reason. If it’s a normal occurrence to see that your cat is sneezing and has watery eyes, you need to determine why.

It could be as harmless as a change in the weather. It could be as serious as an illness or allergic reaction. Here are some of the most popular causes and how you can react:

Do Cats Sneeze When They Are Cold?

Cats won’t automatically sneeze in cold weather, but this can still be the reason for a sneeze. It depends on the cat, how cold it is, and the amount of mucus it naturally produces. That’s because cold weather (or cold air) triggers two things in the noses of cats and humans alike:

These two events can make a cat more liable to sneezing. Its nose is more sensitive, so the mucus can build up and then need to be cleared. A sneeze is a natural, benign result.

Closely monitor your cat during changes in the weather. Does it seem to sneeze more in winter or fall? Does it sneeze when the air-conditioner is set to a certain temperature? If so, then temperature changes may be the reason why your cat sneezes.

Do Cats Sneeze When They Have A Cold?

Felines won’t catch a cold, but they can still grow ill. Repeated sneezing is one of the more recognizable signs of an upper respiratory infection in cats. In fact, they even have their own brand of the flu.

A small family of viruses causes cat flu. As stated in Antiviral Research, feline herpes virus and feline calicivirus are the main causes of cat flu. With that in mind, there are three primary categories for upper respiratory infections:

Most cat flu strains are contagious, able to be transferred through contact of eye, mouth, or nasal discharge. Even indirect contact is enough if the infected cat shares food or water or sneezes and leaves mucus on trafficked surfaces. Asides from sneezing, cat flu will manifest symptoms like:

A cat with cat flu will sneeze and cough, which will spread contaminated mucus everywhere. It is best to keep an infected cat isolated to a room that can be disinfected once treatment is complete. Of course, the cat will need treatment. The specifics of the treatment will vary depending on the cause of the flu. Generally, supportive therapies and antibiotics will be prescribed.

If your cat is sneezing and swallowing a lot, then it may be attempting to clear its throat of fluids. If you have an old cat constantly sneezing, take it to the vet. Cat flu is at its most dangerous in young and old cats. Cats that receive treatment usually recover swiftly unless a secondary illness is triggered.

Do Cats Sneeze When Stressed?

Stress will lead to cats exhibiting some strange behaviors. Sneezing is not known to be one of them. However, cats that live with constant stress are more vulnerable to viruses and infections. These, on their own, can result in sneezing as a symptom. If you suspect that your cat is stressed, it is prudent to resolve the issue quickly and quietly.

Do Cats Sneeze For Attention?

Some cats will fake certain behavior to get your attention. For example, parrots are known to mimic sneezing to catch their owners’ attention. If you see your cat sneezing multiple times, then running up to you, it’s natural to assume that it’s picked up the same trick. It got a reaction before, so it’s trying it again, right?

Not so. For cats, sneezing is not attention-grabbing behavior. That’s because it’s an involuntary reaction. A cat will not fake or mimic a sneeze just to get a reaction out of its owner. It doesn’t have the ability, even if it did notice the positive response from you.

Hairballs may cause your feline to cough and hack at random times. Sneezing seems like a natural addition to this, but you can be sure they’re unrelated.

A hairball is a compact, sticky mass of ingested fur covered in digestive fluids and mucus. There is no part of a hairball that would result in a cat sneezing. That is, unless there is something physically wrong with the cat and fluids find a way into its nose. The odds of this happening are minimal.

If your cat exhibits odd behavior or seems to struggle with ejecting a hairball, have it examined by a vet. Inhaling fluids will cause more troubles than just sneezing.

Do Cats Sneeze When They Have Allergies?

Some felines have to contend with allergies just like people. This can offer a variety of symptoms, including:

According to In Practice, pruritus (the fancy term for itching) is a common side effect of allergies. You can narrow this down as the cause of your feline’s sneezing when the cat also:

Identifying the source of the reaction is important. It will not only ease your cat’s discomfort but prevent a more sinister allergic reaction. Cats may develop allergies to:

A vet’s assistance in diagnosing the allergen will be valuable. However, you can also start the process yourself by tracking when your cat appears to have sneezing fits. Is it after being in a certain room or eating a specific food? Is it after you cleaned, used an air freshener, or brought in clean laundry?

Do Cats Sneeze From Pollen?

Cats can be allergic to pollen, just like people, and it will trigger bouts of unpleasant sneezing. This makes spring a bit of a trial, no doubt, but there are anti-allergy medications you can secure from a vet.

It may be helpful to keep your cat inside during peak-pollen count weather. Investing in some air filters wouldn’t hurt either if the reactions are severe.

Do Cats Sneeze From Dust?

Dust allergies are not common, but they still occur in cats. Do you notice your cat sneezing more after it explores under the bed or behind the couch, where dust collects? Does it go into a sneezing fit after playing outside in the dirt?

Given how prevalent dust is in the everyday home, even with persistent cleaning efforts, medication will likely help control severe reactions. Air filters, again, can be handy here.

Although not quite dust, ash, and smoke can trigger breathing problems in cats, including sneezing. Inhaling ashy air may cause a feline to sneeze as it clears the gunk out of its nose. If you have a fireplace, keep it clean and dispose of ash properly.

Do Cats Sneeze From Chemicals?

Airborne chemicals, such as air fresheners or fumes from cleaning chemicals, are quite harmful to cats when inhaled. Sneezing may result from an allergic reaction (depending on the chemical) or more severe toxicity issues. Fumes can also irritate the nose and throat, and even the lungs.

Always be careful when introducing air fresheners into your home. Not all are safe for pets. The same goes for cleaning chemicals. Keep cats out of rooms being cleaned with harsher compounds, such as bleach, and ensure such places are well-ventilated.

Do Cats Sneeze When The Air Is Dry?

Prolonged exposure to dry air can irritate the nose, mouth, throat, and lungs. The lack of moisture in the air means that any exposed skin dries in response. The constant act of breathing pushes dry air through the nose and throat, causing them to become arid.

Mucus production may increase in an attempt to counteract the dryness. This can only do so much, however. As the nose dries out, the mucus membrane becomes more exposed and easier to irritate. That makes it sensitive to sneeze attacks.

Cats are unlikely to drink more water to solve this. To keep them hydrated during drier weather, offer them food with extra liquids. These could be wet cat food mixes with sauces or gravy or liquid treats. You can also run a humidifier to increase the moisture content of the air.

When Should I Worry About My Cat Sneezing?

Cats don’t exactly tell us when they feel unwell and need help. It is our responsibility to keep watch for any concerning symptoms that indicate trouble on the horizon. Continuous sneezing isn’t always a sign of an underlying issue, but it can be. The time to see a vet about odd sneezing is when:

Why Is My Cat Sneezing So Much All Of A Sudden?

Sneezing in cats is a natural response for cleaning the nose of any foreign matter or excess mucus. Most of the time, such a sneeze is an isolated event.

Excessive sneezing is potentially a symptom of an underlying problem. Monitor your cat for any unusual behavior or other symptoms. If any arise, get in touch with a vet.