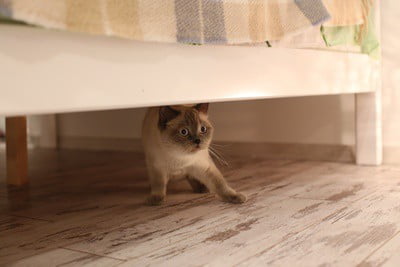 Cats can venture outdoors in a happy and contented mood, only to return home agitated. Your cat may act strangely by hissing, hiding, avoiding food, avoiding you, or refusing to go back outside. This odd behavior could happen suddenly or slowly develop over time.

Cats act strangely after being outside due to fights with rival cats, animal attacks, and abuse by humans. Your cat could be traumatized by a bad experience, injured by a fall, have eaten toxic plants, become pregnant, or fallen ill, all of which result in unusual feline behaviors.

Some cats get over bad experiences after a short nap, while others are more deeply psychologically scarred. If your cat is behaving abnormally for more than 24 hours, especially if it’s lost its appetite and stopped drinking, you should get your cat checked over by a veterinarian.

Why Is My Cat Acting Weird After Going Outside?

If your cat went outside for a few hours and came back acting strangely, it’s natural to be concerned. This can happen to any cat, whether it has explored the great outdoors once or hundreds of times.

Your cat may suddenly change in the following ways:

You can expect one of these issues to be the culprit:

An Altercation With Other Cats Or Pets

Cats don’t have a strict hierarchy, but they still have territories. Since they’re not permanent lines, cats regularly get into fights over what areas belong to whom.

Your cat may have done the following:

Cats rarely fight. Instead, they hiss, warn, and bat at each other. When cats do clash, it can be a ferocious encounter. Your cat may come back home badly shaken from the experience.

Your cat may have entered your neighbor’s yard or tried to play with a toy. The resident cats, dogs, or other large pets may have warned it off. Getting chased off will have left your cat traumatized and upset.

When indoor cats are allowed to go outside, they’re likely to encounter stray or feral cats. Homeless cats tend to be elusive, keeping to themselves.

If your cat stays out for too long, it might pick up some of these habits from stray or feral cats. When your cat does come home, it’ll act weird or out of character.

Even in a suburban neighborhood, some predators hunt cats.

Bigger animals that might chase, frighten, scare off, or pursue your cat include:

An attack from any of these animals can frighten a cat. Even if it’s not injured, it may behave unusually for days or weeks as it recovers from the experience.

If your cat is used to staying indoors, venturing outside for the first time will be an exciting and traumatic experience in equal measure.

Your cat may have fun climbing trees and watching birds. However, encountering unfamiliar objects, rushing cars, loud sirens, or attacks from wild animals can be traumatic.

Falls, fights, and accidents may leave your cat injured.

This could include the following:

All of these can cause your cat to begin acting strangely after going outside. Cats don’t like to reveal their pain or injuries since doing so is akin to conceding territory to their rivals.

If your female cat is unfixed and goes in heat, she’s likely to get pregnant after going outdoors.

Pheromones are emitted from a female’s urine, poop, and skin, and male cats can detect this from miles around. It won’t help that your female will issue loud mating calls to invite them.

A pregnant cat is bound to experience changes that are confusing to her. Also, maternal instincts and hormones will change her behavior as she prepares for the coming litter.

If you think your cat is pregnant, you can reach out to a vet for an ultrasound to confirm.

You can also look for signs of:

After being outside, your cat might act weird because it contracted an illness while exploring.

It’s easy for cats to pick up pathogens or diseases from other cats. Your cat may have played in a junk pile, rolled in contaminated grass, or have eaten bacteria-infested food.

Given that cats are good at hiding sickness, the best way to recognize physical illness is to check for sudden changes in behavior.

According to the American Veterinary Medicine Association, the first signs are usually:

Since it’s hard to restrain cats indoors, you can protect your cat from contagious diseases through vaccinations. Be sure your cat is up to date on all its shots before going outside.

You can contact a vet to test your cat for certain illnesses if it’s already begun to act weird.

Pests and parasites are common outdoors.

Once your cat ventures outside, it can get the following:

Ear mites and fleas are among the most common parasites that affect cats. Without proper treatment, your cat will start behaving weirdly by:

Cats can be fussy when it comes to the type of food they eat. However, this doesn’t mean your cat is exempt from consuming poisonous plants, insects, and human foods like chocolate.

Toxic plants include carbon beans and lilies, and many types of insects emit poisonous compounds when digested to kill their predators.

Symptoms to look out for include the following:

Your cat may lose its bearings and get lost after venturing outside.

It’ll encounter honking horns, sirens, construction work, rushing cars, and other loud noises. Also, it may get stuck in unfamiliar terrain or get caught in a storm.

When this happens, and your cat gets lost, it can turn out to be a horrific experience, especially if the cat isn’t used to staying outdoors. Even once it finds its way home, it might take time to recover.

Why Is My Cat Aggressive After Going Outside?

If your cat becomes aggressive after being outside, it likely got into a fight with a neighbor’s cat.

Both domestic and feral cats use aggression to:

If your cat is fresh from a conflict, it may take a while to calm down. Until its hormones settle down and its energy dissipates, it’ll be primed for another conflict, even with you.

This will normally fade within a couple of hours. If the behavior persists, limit how much the cat goes outside for a couple of weeks. It may be returning to its territory, successfully defending it, and continuing to pick up undesirable habits from feral cats.

Why Is My Cat Hissing At Me After Being Outside?

Cats usually hiss when they feel threatened to scare away real and imaginary enemies.

Your cat is likely hissing at you because it was recently frightened by something or someone. Unfortunately, it’s still feeling anxious about the entire ordeal.

This may include the following:

Your cat may have sustained an injury. When in pain, cats isolate themselves to avoid seeming vulnerable to predators and rival cats.

Why Is My Cat Throwing Up After Being Outside?

If your cat is throwing up after being outside, it’s probably eaten bad food, drank dirty water, or licked something toxic. Cats are curious and responsive hunters.

Even if a cat has no intention of eating a bug, rodent, or bird, it may still catch it. If this creature emits a toxin or carries a disease, it may get into your cat’s mouth. Likewise, cats may scavenge on leftovers.

Your cat may have done the following:

If any of this contained bacteria or toxic chemicals, your cat’s body will respond by ejecting the contamination. Vomiting is the fastest way to get rid of the harmful substance the cat ate. Contact your vet if it continues for several hours or the cat shows other symptoms.

Cats vomit for less dangerous reasons, including the following:

Allowing your cat outdoors can lead to allergic reactions, including throwing up.

Cats can be allergic to the following substances:

Since it is hard to prevent your cat from encountering these allergens, you can use allergy treatments to avoid flare-ups.

You can limit when your cat goes outdoors, especially if it’s a pollen-heavy season.

Intestinal parasites are easy to deal with using various treatments.

The most common internal parasites that cause vomiting include:

You can deworm your cat regularly to avoid this issue.

Why Is My Cat Foaming At Mouth After Going Outside?

Foaming at the mouth is usually a sign of poisoning. Your cat likely ate something toxic, such as a plant, a bug, or chemicals in a water supply.

Other symptoms will include:

Plants that are highly toxic to cats include:

These will cause foaming and vomiting when consumed. Also, bites from insects and stings from wasps or bees can cause toxicity that leads to foaming at the mouth.

Foaming at the mouth can be due to dental problems, as food stuck between your cat’s teeth can lead to the accumulation of plaque. This may lead to foaming and drooling due to bacterial growth in the mouth.

Why Is My Cat Coughing After Being Outside?

If your cat is coughing after being outside, it’s usually due to a respiratory issue.

Your cat may have inhaled dust or pollen, which is causing excessive coughing. Also, it may be experiencing an allergic reaction due to exposure to pollen, dust, or certain plants.

If your cat coughs persistently for several days, consult a vet. It could be a sign of a respiratory condition, like bronchitis, or later develop into that.

Why Is My Cat Panting After Being Outside?

Your cat is likely panting because it’s anxious, overheated, or stressed.

Your cat may have done one of the following:

You should only be concerned if:

If so, check if your cat has a respiratory condition.

Why Is My Cat Sneezing After Being Outside?

If your cat is sneezing after being outside, it’s usually due to an allergic reaction. Cats are allergic to dust, pollen, and strong scents, so they’ll sneeze to clear their nasal cavities.

If the sneezing continues for several days, it may be a respiratory issue. Sneezing is a symptom of upper respiratory infection in cats that usually develops when cats go out in the cold.

Why Is My Cat Sniffing At Everything After Being Outside?

Cats use their sense of smell to detect prey, mark territories, and learn about environments. Your cat might sniff at everything after being outside to distinguish between indoor and outdoor environments.

For example, your cat may find that its scratching post smells different from the tree outside.

Why Is My Cat Traumatized After Going Outside?

Your cat might be traumatized because something scared it while it was outside. Your cat probably met a strange animal or a predator like a snake, dog, or raccoon.

Conflicts and confrontations with bigger, stronger cats in the neighborhood might scare and traumatize your cat. The good news is that your cat won’t be traumatized for long.

Why Is My Cat Suddenly Scared Of Going Outside?

Your cat can develop a sudden fear of going outside after a bad experience due to the following:

New construction in the neighborhood or traffic noises can cause cats to fear the outdoors.

Moving to a different neighborhood may confuse your cat, so it’ll refrain from going outside until it becomes more familiar with the new environment.

Even if your cat acts strangely after going outside, it should recover in a few days. Unless it has a medical issue, it’ll calm down, readjust to the home, and start acting normally again.

1 thought on “Why Is My Cat Acting Strange After Being Outside?”